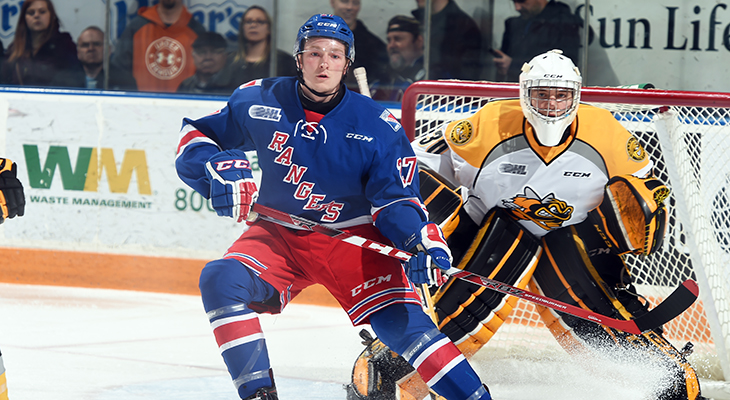 The Kitchener Rangers would have liked to close out their regular season home schedule with a win on ‘Fan Appreciation Night’, but the best way they can show their appreciation for the fans will be to win their next home game – when they return for Game 1 of their playoff series vs. the Windsor Spitfires.

The Sting would take a 2-0 lead after 20 minutes, and lead 3-0 before the Rangers climbed back to make it a 3-2 game with 15 minutes left to play in the third period. With just over five minutes to play the Sting regained the two-goal lead, then an empty net goal with one second left on the clock would seal the 5-2 win.

Sarnia opened the scoring near the midway point of the first period on a goal by McGregor, his 10th of the season, from Jordan Kyrou at 9:31.

Nikita Korostelev from Anthony Salinitri and Derrick Johnson made it 2-0 at 14:25 to round out the period scoring.

Sting forward Jacob Stos was called for charging, roughing, fighting, and a game misconduct for a high hit on Rangers rookie Joseph Garreffa in the far corner of the Kitchener zone at 17:07 of the period. After penalties to both sides were called, the teams played four-on-four for two minutes before the Rangers ended up with a three-minute man advantage (five minute major to the Sting and a two minute minor to the Rangers), but the Blueshirts failed to get on the board.

Shots were 13-9 in favour of the Sting after one period of play.

It was the Sting who would use the power play to their advantage in the second period, taking a 3-0 lead at 10:29 off the stick of Salinitri, from Zacha and Korostelev.

Darby Llewellyn would break the goose egg for the Rangers, scoring his 22nd of the season by outwaiting a sprawled-out Hughes and lifting the puck top-corner to make it a 3-1 game. Brandon Robinson and Ryan MacInnis would pick up the assists on the goal, which came at 13:03 of the second.

David Miller made it a one goal game with his 14th goal of the season, assisted by Mason Kohn and Miles Liberati at 4:59 of the third period, but the Sting would restore their two-goal lead with just 5:11 to play in the game, as McGregor tallied his second of the night, from Zacha, at 14:49.

The empty net goal came on the stick on Brandon Lindberg, from Zacha and Devon Paliani, at 19:59 to solidify the 5-2 win.

Final shots were 10-9 Kitchener in the third period, and 36-31 Sarnia overall.

The Rangers finished the night 0-for-3 on the power play, while the Sting were 1-for-3 with the man advantage.

Darby Llewellyn (3), Anthony Salinitri (2) and Ryan McGregor (1) were chosen as the Three Stars of the Game.

The Rangers play their final game of the regular season tomorrow night, Saturday, March 19th when they travel to Owen Sound to take on the Attack for a 7:30pm start.