Strong outing by Carty overshadowed in Rangers loss to Storm 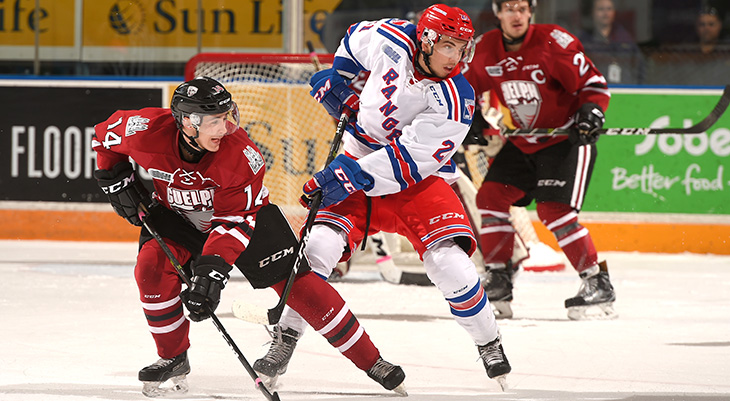 The Kitchener Rangers will likely head into the Christmas break with a bit of a sour taste in their mouths.

Video review has seemingly become a prevalent issue for the Rangers (19-11-1-1), as another disputed goal call proved costly in a 5-2 loss to the Guelph Storm (12-18-2-1) in front of an announced attendance of 4,075 at the Sleeman Centre on Saturday afternoon.

The Rangers lead 1-0 and 2-1 before Albert Michnac was ruled on the ice to have scored his second of the afternoon to tie the game 2-2 with under five minutes to play in the second period.

After a lengthy review the call on the ice would stand. The only problem was, supplementary video seems to point to the contrary as the puck could never actually be seen crossing the goal line.

The Rangers were unable to rebound after the call, as the Storm took their first lead of the game just shy of two minutes into the third period, then added a pair of empty net goals in the final minute of play to pick up their first win over the Blueshirts this season.

Anthony Popovich (4-6-0-0) picked up the win for the Storm, surrendering two goals on 29 shots.

Dylan Seitz opened the game’s scoring with a goal in his second straight game, his eighth of the season and a power play marker, at 4:16 of the first period from Riley Damiani and Adam Mascherin.

With just under five minutes to play in the opening period the Storm would strike, as Michnac registered his ninth goal of the season to tie things up 1-1, from Dmirti Samorukov and Popovich at 15:35 to round out first period scoring.

First period shots on goal were 16-10 in favour of the Storm.

The Rangers would regain the lead on the stick of Jacob Cascagnette, who tallied his sixth of the season just 2:39 into the middle frame, from Frank Hora and Doug Blaisdell to make it 2-1 Kitchener.

The goal called into question, Michnac’s second of the game, came at 15:04 and was ruled to stand with the assists to Nick Deakin-Poot and Levi Tetrault.

Guelph took its first lead of the game just 1:24 into the third period, as Isaac Ratcliffe scored his 16th of the season, from Givani Smith and Ryan Merkley, to make it a 3-2 game.

It would remain a one-goal game until the final minute of play, as Carty retreated to the Rangers bench in favour of an extra attacker and Ratcliffe pounced, scoring into an empty net for his second of the game to make it 4-2 with 45 seconds to play. Luke Burghardt picked up the lone assist on the goal.

With three seconds to play Smith made it 5-2, as another empty net goal gave him his 17th of the season, and the Storm the victory.

Kitchener was 1-for-2 on the power play, while Guelph went 0-for-4 with the man advantage.

The Rangers return to action after the holiday break when they travel to the WFCU Centre to face the Windsor Spitfires on Thursday, December 29 at 7:05pm.

Their next game back home at the Aud is Friday, December 30 when they host Midwest division rival, the Owen Sound Attack, at 7:30pm.

The Kitchener Rangers would like to wish all of Rangers Nation a safe, festive and Merry Christmas.