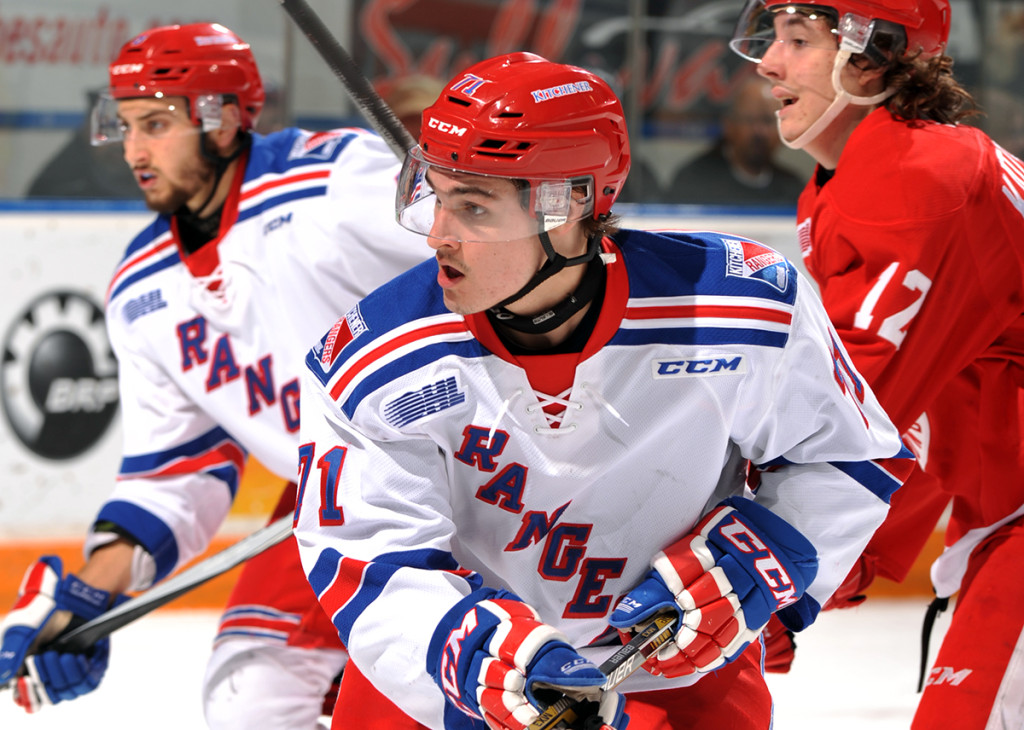 It was an excellent road effort for the Kitchener Rangers – especially considering it was their third game in two-and-a-half days, with extended travel.

Joseph Garreffa scored his second goal of the season and Dawson Carty was pivotal in goal as the Rangers came away with a 4-2 win over the Sault Ste. Marie Greyhounds (31-26-7-1) in front of 3,915 fans at the Essar Centre on Sunday afternoon.

The Rangers win finalizes the season series between the two teams at a pair of wins apiece, and also gives the Rangers their first win in the Soo since January 16th, 2011 (snapping a 10-game winless streak).

The seventh place Greyhounds (70 points), who burned their game in hand over sixth place Owen Sound (70), remain three points back of the idle Attack, each with three games left to play.

In the first period, Joseph Garreffa was left wide open in the slot and patiently found the top left corner of the net to register his second goal of the season, giving the Rangers a 1-0 lead. Nick McHugh and Jacob Cascagnette picked up the assists on the goal, which came at 2:36.

Brandon Robinson notched his second goal in as many games just after a Kitchener power play expired, giving the Rangers a 2-0 lead at the ten minute mark, from Dylan Di Perna and David Miller.

Zachary Senyshyn cut the Rangers lead to 2-1 from Boris Katchouk at 11:22, but the Rangers would respond just 14 seconds later to restore their two goal lead.

Nick Magyar got on the board with his 11th goal of the season, assisted by Darby Llewellyn, at 11:36 to round out the first period scoring. Shots were 11-6 Kitchener in the opening frame.

The second period remained scoreless until Llewellyn, with a nice break-up play in the neutral zone, found Adam Mascherin who buried a beautiful wrist shot over the shoulder of Halverson for his 35th of the season at 13:23 to make it a 4-1 game.

Second period shots were 10-4 in favour of the Rangers.

Tim Gettinger cut the Rangers lead to 4-2 with a power play goal at 14:56, a deflection, from Gustav Bouramman and Blake Speers. With 3:02 to play, the Greyhounds elected to pull Halverson in favour of an extra attacker in an attempt to close the gap, but to no avail.

Final shots were 29-24 in favour of the Soo, including 19-3 Greyhounds in the third period.

The Rangers finished the night 0-for-2 on the power play, while the Greyhounds were 1-for-5 with the man advantage.

Brandon Robinson (3), Joseph Garreffa (2) and Darby Llewellyn (1) were chosen as the Three Stars of the Game.

The Rangers are back in action on Thursday, March 17th when they begin another three-in-three as they travel to Windsor to take on the Spitfires for a 7:05pm start. They return to the Aud for their final home game of the regular season on Friday, March 18th when they host the Sarnia Sting at 7:30pm, then finish off the campaign on the road on Saturday, March 19th in Owen Sound vs. the Attack at 7:30pm.

Tickets are also still available for the Rangers final home game of the regular season, the Fan Appreciation Game, next Friday, March 18th vs. the Sarnia Sting at 7:30pm.