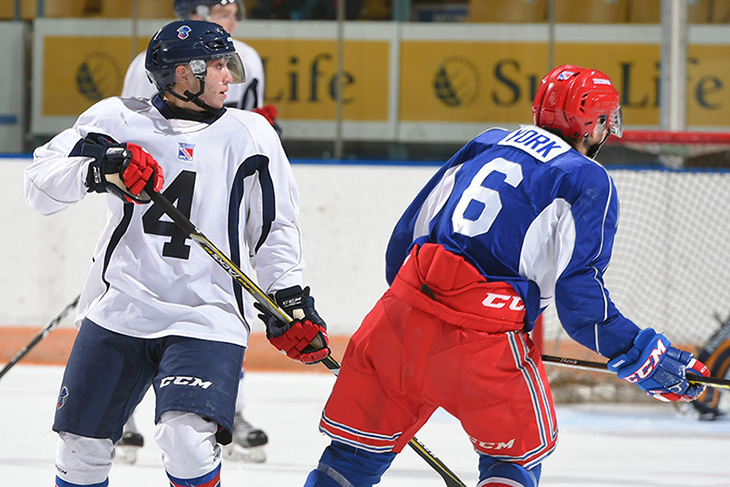 The Kitchener Rangers kicked off Day Two of 2017 Training Camp with the first scrimmage of the week between Team Blue and Team White on Tuesday morning at The Aud.

After falling behind 3-0 and 4-1 in the first period, Team Blue stormed back with four unanswered goals to skate to a 5-4 win over Team White.

The opening period saw a flurry of scoring – seven goals in total – which began just 2:31 into the game with a marker by veteran defenceman Connor Hall, unassisted, for Team White.

Alex Peterson made it 2-0 Team White at 7:16 with the lone helper credited to Giovanni Vallati.

Just 90 seconds later Team White was up 3-0 on the stick of Joseph Garreffa, with Greg Meireles and Jake Henderson picking up the assists.

Midway through the period Ryan O’Hara got Team Blue on the board, assisted by Holden Doggett, to cut the Team White lead to 3-1 at 10:09. Garreffa would answer back and restore the three-goal lead for Team White at 13:16 with his second goal of the game, unassisted, to make it 4-1.

With just over five minutes to play in the first period Team Blue inched closer, as Kobe Desmond tallied to cut the lead to 4-2 at 14:58. Doggett’s second point of the game was the lone helper on the goal.

Team Blue closed the gap to 4-3 less than a minute later as Connor Bunnaman fed linemate Rickard Hugg with a pretty passing play on a two-on-none. The goal, shorthanded, came at 15:53 to close out first period scoring.

Jonathan Yantsis tied the game, 4-4, just past the midway point of the second period for Team Blue, with Grayson Ladd and Hugg earning helpers on the goal at 11:05.

The game winner came by way of the power play from defenceman Logan Stanley, giving Team Blue its first lead of the game at 16:51, assisted by Liam Peyton and Domenico Argento to round out game scoring.

The game consisted of two, 20-minute periods with one-minute penalties.

The next scrimmage between Team Blue and Team White during Rangers Training Camp takes place tonight, Tuesday, August 29th at 7pm at The Aud. This scrimmage will consist of three 20-minute periods.

All Training Camp scrimmages are open to the public and free to attend.

Training Camp continues with one final scrimmage on Wednesday, August 30th at 10am at The Aud.

Following the completion of Training Camp, the Rangers will participate in the HarborCenter OHL Showcase in Buffalo, N.Y. from September 1st – 3rd. For more details on the tournament or how to purchase tickets, click here.

Including three preseason games in Buffalo, the Rangers will play a total of six exhibition games before the start of the 2017-18 regular season. The final game of the preseason – and lone home game at The Aud – takes place on Saturday, September 16th when the Blueshirts host the Niagara IceDogs at 2pm. Prior to the game is the team’s annual Fan Fest and Barbecue in support of Children’s Wish. For more details on the event, click here.