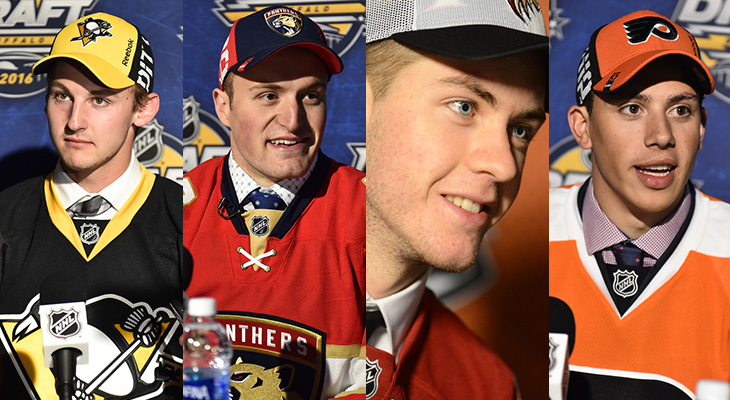 The Kitchener Rangers have a total of ten returning/recently graduated players selected to participate in NHL prospect and development camps this offseason.

Adam Mascherin, Connor Hall and Connor Bunnaman (all selected in the 2016 NHL Draft last month) were invited to attend camp with the Florida Panthers, Pittsburgh Penguins and Philadelphia Flyers, respectively.

Jeremy Bracco, drafted by Toronto in the 2015 NHL Draft, is taking part in his second camp with the Maple Leafs.

Ryan MacInnis was invited to his third camp with the Arizona Coyotes after being drafted by the club in 2014. Mason Kohn joins him, skating with the club for the first time after attending Panthers camp last summer.

Frank Hora was one of the first to depart for camp, as he skated with the Columbus Blue Jackets in late June, then was invited to Buffalo Sabres camp a week later. Dawson Carty was also a free agent invite, taking part in the Dallas Stars program.

Follow the Rangers on Twitter (@OHLRangers) and Facebook (@ohlrangers) to stay up-to-date on the most recent off-season developments surrounding the team. Use the hashtag #AllForBlue to join the conversation on all Rangers social media avenues.