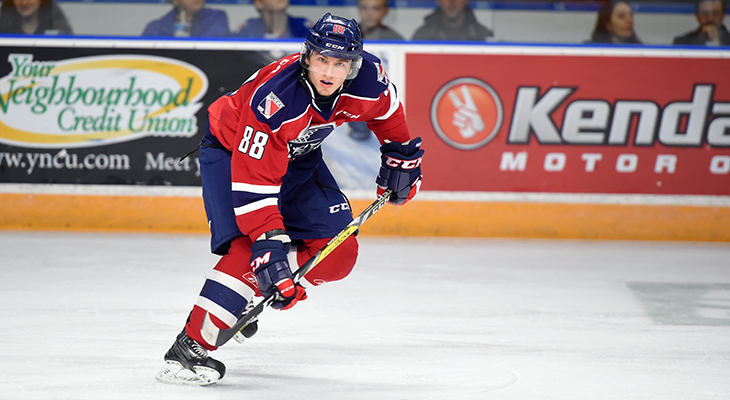 After inspiring wins over tough Western Conference opponents in the Windsor Spitfires and Erie Otters earlier this week, the Kitchener Rangers looked to win their fourth straight game for just the third time this season on Friday night against another conference rival.

But the Guelph Storm had other ideas.

It was the first time in eleven tries that the Storm picked up a win on Aud ice, with their last win here dating back to the 2013-14 season on March 4, 2014.

The win also maintains a record which sees the Storm undefeated in regulation when leading after two periods of play (14-0-0-1).

Cause for concern for the Rangers added on in the second period when Kitchener forward and OHL leading point-getter Adam Mascherin appeared to experience some discomfort behind the goal line in his own end, and slowly left the ice. He would not return. Failing to tally a point before his departure, the Maple, ON native saw a nine-game point streak (3G, 15A) snapped.

Luke Opilka (8-8-1-1) suffered the loss, making 24 saves over 57:45 of playing time before heading to the Rangers’ bench in favour of an extra attacker in an effort to tie the game.

The Storm took the lead early, making it 1-0 just 1:55 into the game on Givani Smith’s 20th goal of the season, assisted by Ryan Merkley and Waterloo native Nate Schnarr.

With just over five minutes to play in the opening frame the Storm made it 2-0 as Luke Burghardt scored his eighth of the season, from Barret Kirwin and Nick Deakin-Poot, at 14:58.

Kyle Rhodes helped pile it on, making it 3-0 Storm with his third of the season, from James McEwan and Liam Hawel at 16:26.

First period shots on goal were 13-7 in favour of the Rangers.

Elijah Roberts finally got the Rangers on the board in the second period, cutting the Guelph lead to 3-1, from Cole Carter and Cedric Schiemenz at 4:34.

Greg Meireles made it a one-goal game, 3-2, at 11:46 with his eleventh of the season from Giovanni Vallati and Kyle Gentles, which was as close as the Rangers would come to tying things up, as both teams skated through a scoreless third period.

Kitchener had just one opportunity with the man advantage and failed to capitalize, going 0-for-1. The Storm were held goalless in their two power play opportunities.

The Rangers wrap up their five-game home stand on Sunday afternoon, January 22nd when they host the Ottawa 67’s for the only time this season at 2pm.