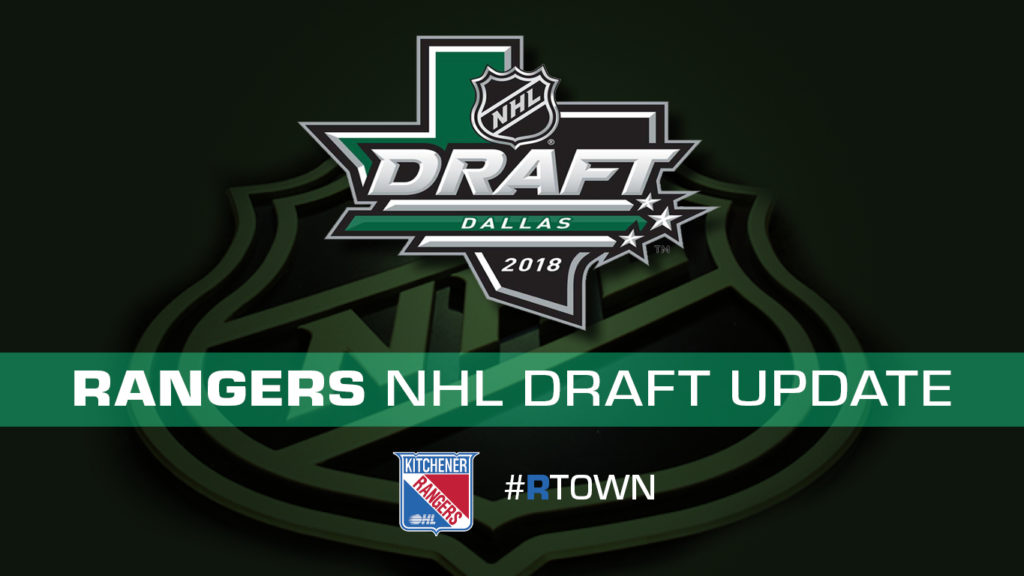 Adam Mascherin, Riley Damiani and Giovanni Vallati all heard their names called as the three made up the entirety of the Kitchener Rangers contingent selected at the 2018 NHL Entry Draft at American Airlines Center in Dallas, TX.

The left winger, Mascherin, became the first Blueshirt of the day chosen when he was selected in the 4th round, 100th overall by the host Dallas Stars.

The 20-year-old, Maple, ON native re-entered the Draft after failing to come to a signing agreement with the Florida Panthers, the team who chose him in the 2016 NHL Draft.

Mascherin is coming off his third straight season as the Rangers’ leading scorer, most recently registering his first 40 goal season in the Ontario Hockey League in 2017-18 amassing a total of 86 points in 67 regular season games played. He led the team in goals and power play goals (12), while earning a team-leading three awards at the end of the Rangers season, including the 570 News 3-Star Award (for the second straight year), the Jim Reilly Award as Scoring Champion (for the third straight year), and the Jim Malleck Memorial Award as Most Valuable Player (for the second straight year).

He finished third in 2017-18 team playoff scoring and was one of three players who registered 20 or more points in the postseason. He finished at better than a point-per-game production with nine goals and 24 points in 19 games.

“I’m excited the Dallas Stars have given me the opportunity to be a pro,” said Mascherin following the Draft, “and I look forward to getting on the ice with them in camp.”

With the 100th pick in the 2018 #NHLDraft, the Dallas Stars have selected forward Adam Mascherin from the Kitchener Rangers of the OHL. #NHLDraft pic.twitter.com/PGUONfaveM

Just 37 picks later Damiani would join Mascherin as the second Blueshirt of the day chosen by the Stars with the 137th overall selection in the 5th round.

Entrusted by head coach Jay McKee to shut down some of the top lines the Rangers faced through their run to the Western Conference Final this past postseason, Damiani was named a multi-award winner at the end of the campaign as the team’s recipient of the Jim McGeachie Memorial Award for Outstanding Team Effort, as well as the Les Bradley Award winner for Most Improved Player.

A bit of levity presented itself amidst all the nervousness and excitement, as Damiani’s father, Rino, actually missed Riley’s name being called because he decided to sneak away quickly to use the washroom. Damiani explained the story, with a chuckle, to Josh Bogorad of DallasStars.com below.

“I think he had just gotten out of the arena and my name got called and my mom started freaking out.” Fifth round pick @rileydamiani on a memorable #NHLDraft experience. pic.twitter.com/onyAjkNSMh

Kitchener Rangers defenceman Giovanni Vallati became the third Blueshirt of the day chosen when the Winnipeg Jets called his name in the 5th round, 153rd overall.

After coming off an impressive rookie campaign in 2016-17, Vallati had another strong showing in his second Ontario Hockey League season. He registered career highs in assists (23) and points (26), while skating as a member of Team Cherry in the CHL/NHL Top Prospects Game in Guelph earlier in the season.

He logged high minutes in the Rangers postseason run to the third round, tallying four assists while a plus +7 in 19 playoff games.