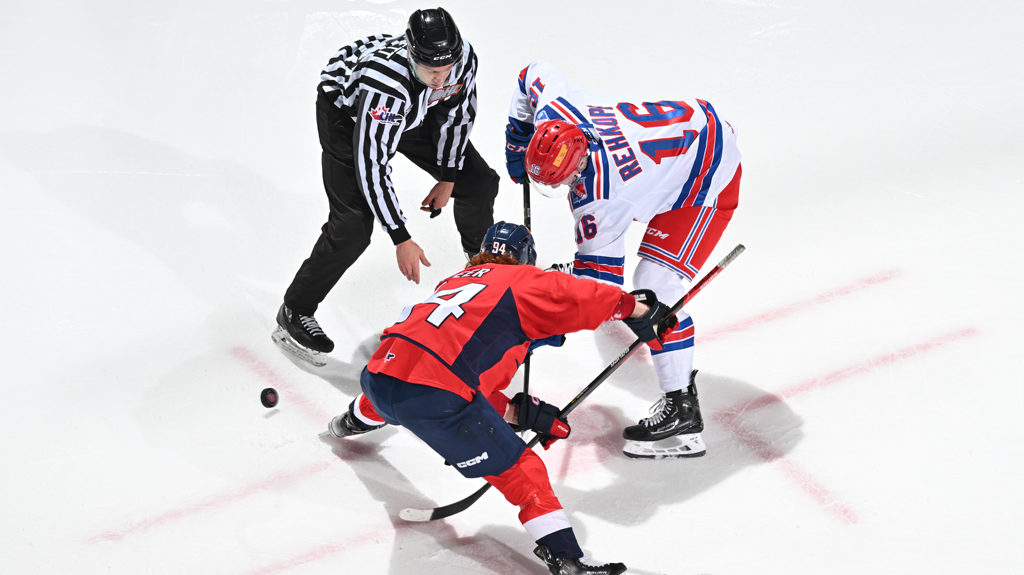 Kitchener, Ont. – Carson Rehkopf and Trent Swick each scored for Kitchener, Reid Valade tallied two assists and Marco Costantini made 27 saves on 33 shots but Windsor routed the Rangers 6-2 in front of 6,031 fans at The Aud Friday. The Rangers were missing their top line of Mitchell Martin, Filip Mesar (Montreal Canadiens) and Francesco Pinelli (Los Angeles Kings).

Windsor got things started early at the 4:05 minute mark in tonight’s game. Oliver Peer sent a pass in the neutral zone under the stick of a Ranger defender to lead Alex Christopoulos one-on-one with Marco Costantini. Christopoulos fired a shot from the right face-off dot that beat Costantini far side over the blocker. Both teams traded chances throughout the rest of the period with Kitchener coming the closest, but a Matthew Sop attempt was cleared off the goal line with 30 seconds remaining in the period. The score after 20 minutes had Windsor ahead 1-0 and shots also facouring the Spitfires 13-9.

Kitchener got their equalizer 3:06 into the second period. Carson Rehkopf finished off a Reid Valade backdoor pass. Valade stole the puck from a Windsor defender in the Spitfires’ zone and found Rehkopf with a backhand pass. Rehkopf then backhanded the puck through the body and glove arm of Spitefires’ netminder Joey Costanzo.

Windsor responded with two unanswered goals to regain and double their lead. First, 2:07 after the Kitchener goal, Colton Smith collected the rebound off a point-shot before sliding the puck under the leg of an outstretched Costantini. Then, on their only power-play opportunity of the game at the point, Windsor doubled their lead 3-1. A pass across the point by Anthony Cristoforo was one-timed into the top right corner by Michael Renwick beating Costantini who was sliding from left-to-right.

Windsor headed into the second intermission with a 3-1 advantage and the lead in shots 23-17.

The Spitfires opened the third period with their third unanswered goal of the game extending the lead to 4-1. Oliver Peer completed a three-point night with a move to his backhand in tight, roofing the puck over the glove of Costantini. Windsor wasn’t don’t there, adding a fifth goal at the 9:26 mark. Noah Morneau finished off a nice passing play for his second goal of the season.

Kitchener scored a power-play goal with 6:15 left in the game. Reid Valade received the puck at the bottom of the left circle and stuffed a shot through the legs of Costanzo to make it 5-2. Then with 27 seconds remaining, Matthew Maggio (New York Islanders) scored his 14th goal of the season to put the nail in the coffin and give Windsor a 6-2 victory. Final shots favoured the Spitfires 33-27.

The Rangers finished the game 1-for-3 on the power-play and 0-for-1 on the penalty kill. All three stars were awarded to members of the Spitfires.

Next Home Game:
Help make holiday dreams come true on Tuesday, December 6th, at the 27th Annual TEDDY BEAR TOSS GAME presented by Canadian Tire Jumpstart, Giving kids a sporting chance. The Kitchener Rangers host the Guelph Storm at 7 p.m. and ask you to bring a NEW teddy bear to the game. Immediately following the Rangers’ first goal, throw your bear onto the ice surface! Bears will then be collected & turned over to local charitable organizations just in time for Christmas. Great seats are still available and can be purchased here.

Registration Open for Teddy Bear Toss Recipients:
The Rangers have donated 172,267 bears in the 27-year history of the event. Individuals, groups, and organizations wanting bears, may register at the link here and follow instructions on how to access the venue for pick up.