ATTACK HOLD ON FOR SHOOTOUT WIN 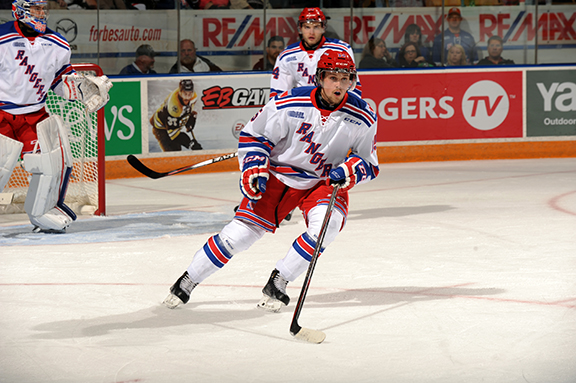 Gustaf Franzen netted his fourth goal in as many games in the Kitchener Rangers’ 5-4 shootout loss to the Owen Sound Attack on Thursday afternoon. Mason Kohn, Ryan MacInnis and Darby Llewellyn also scored for the Rangers in the New Year’s Day matinee matchup.

The Attack hit the scoreboard first, opening the scoring in the dying seconds of a power play opportunity. Santino Centorame’s pass in front of the net was tipped past the netminder by import rookie Petrus Palmu. The Swiss forward’s 13th of the season was also assisted by Chris Bigras.

Mason Kohn’s second goal of the season pulled the Rangers even with eight minutes to play in the frame. The sophomore from Florida collected the puck in the slot and beat Michael McNiven with a high shot. Ryan MacInnis and Nick Magyar earned helpers on the play.

MacInnis lifted the Rangers to their first lead of the game with a power play marker seven minutes into the second period. His heavy shot bounced off the shoulder of McNiven and into the net, bringing his season total to nine goals. Brandon Robinson and import rearguard Dmitrii Sergeev picked up assists on the tally.

Captain Zach Nastasiuk pulled the Attack even with a shorthanded goal with six minutes left in the middle frame. Chris Bigras lifted the puck out of the zone, and the Red Wings prospect corralled it and fired a shot high over the glove of Matthew Greenfield.

The Attack outshot the Rangers 11-9 in the second period.

Two quick goals early in the third period put the Rangers ahead 4-2. First Swedish rookie Gustaf Franzen tipped a puck pass McNiven for his tenth of the year, with help from defenceman Frank Hora and Robinson. The Rangers first round pick in the 2014 CHL Import Draft, Franzen has goals in four consecutive games.

Less than two minutes later, veteran winger Darby Llewellyn parked in front of the Attack net and redirected  Curtis Meighan’s pass over the goal line for his seventh of the season. Sergeev picked up his second point of the game with an assist on the play.

Ethan Szypula pulled Owen Sound within one just past the midway point of the period. The sophomore pivot’s career best eighth of the year was assisted by Bigras and Jacob Busch.

With just over a minute to play and the Attack net empty for the extra attacker, Nastasiuk’s second of the game knotted the score at 4-4 and forced the extra frame. Bigras collected his fourth helper of the game on the play, forcing the puck into traffic and setting up the captain in the crease. Waterloo native Kyle Platzer also assisted on the play.

The Rangers led shots on goal 14-9 in the third period, and finished with a 32-28 advantage in regulation.

Neither team could resolve the deadlock in overtime, sending the contest to a shootout. Platzer and Palmu both scored for the Attack to collect the win. Nick Magyar scored the lone shootout goal for Kitchener.

The next Rangers home game is Friday, January 2 when we host the Niagara IceDogs at 7:30pm. Tickets to all Kitchener Rangers home games are now available by phone at 519-578-1570 or 1-800-265-8977, via the internet at www.centre-square.com or in person at the Centre In the Square Box Office or the Kitchener Auditorium Box Office.