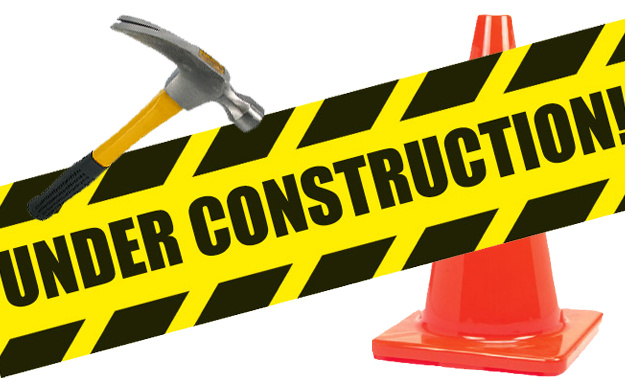 Keep up-to-date on new developments and all activity related to The Aud Expansion Project 2012 right here.

Installation of the underground water pipes started Wednesday, January 11th and is expected to be completed Friday, January 13th in order to avoid any conflict with the Rangers game scheduled for 7:30pm against the Plymouth Whalers. 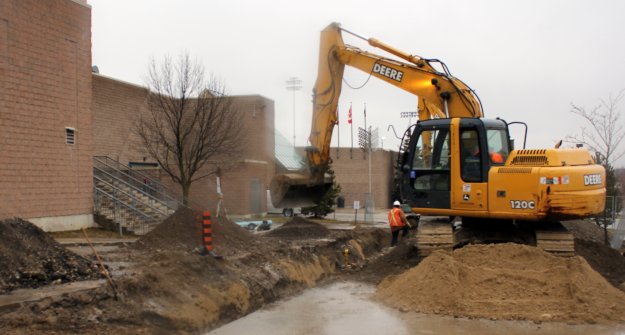 The Rangers office, dressing room and medical facilities have now been re-located to 35 Sportsworld Drive. The Rangers will use Sportsworld as a practice facility and administrative centre until returning to The Aud in September 2012. The team will hold practice sessions on Spectator Rink, media inquires should be directed to Michelle Fortin at 519-576-3700 ext. 23 or mfortin@kitchenerrangers.com.

CLICK HERE For an inside look at what is happening with The Aud Expansion Project 2012, listen to Chief Operating Officer and Governor of the Rangers, Steve Bienkowski provide details on the project. Also included is commentary from the Rangers Head Trainer Dan Lebold and player Tyler Randell.

Demolition of the Rangers office, dressing room and medical facilities advances as well as interior reconstruction of the Don Cameron Room (removal of kitchen and washroom) located beside The Outpost off of the main concourse.

Base work for the new foundation and columns continue to progress. Fans will see the start of exterior steel work in the near future. On the inside of the arena you can see hoarding walls are up along the East side of the bowl in row T that cause a loss of more than 300 seats and the press box area. Removal of the press boxes and prep work for the installation of the structural steel to support the new roof will be ongoing behind the hoarding.

CLICK HERE For an inside look at what is happening with The Aud Expansion Project 2012, listen to Chief Operating Officer and Governor of the Rangers, Steve Bienkowski provide details on the project. (STAGE THREE – UPDATE VIDEO)

Stage four work has commenced at 400 East Avenue in the 2012 Expansion Project. On Wednesday, April 11, cranes that tower The Aud were erected to prepare for the initial raising and installation of steel trusses that are the framework for the expansion. The trusses span the length of the rink and placement commenced on Thursday, April 12. In the coming weeks you will be able to see columns being installed and more steel work completed.

Work continues on the interior of the building where the Rangers office, dressing room and medical facilities were located as well as work on areas behind the current hoarding walls set up along the East side of the bowl.

CLICK HERE to view new video on what is happening with The Aud Expansion Project 2012, listen to Chief Operating Officer and Governor of the Rangers, Steve Bienkowski provide details on the project. (STAGE FOUR – VIDEO)

Work continues in the interior of the building where the Outpost – the official store of the Kitchener Rangers is located. New columns have been placed in the inside of the store and base work for layout changes are happening.

Work is ongoing where the Rangers office, dressing room and medical facilities were located.

You will see changes to the exterior of the building where steel work has been evolving over the past three-weeks. You can now start to see the frame for the three level additions. The first level will house the concourse that supports the new seating area and concessions. The second level will be the Legends level with five private suites, National Hockey League, Canadian Hockey League and Media Lounge and the Rangers executive board room. The third level will feature the home and visiting media boxes.

Further changes to the exterior are the removal of the HVAC system.

The project is on schedule and Stage Five work is slated to begin early June with the installation of pre-cast concrete stairways.

Stage Five of the The Aud Expansion Project includes significant changes to both the seating expansion and the interior dressing room area.

Fans passing by the Kitchener Memorial Auditorium will notice that the exterior framework of the expansion continues to develop. The flooring of the new concourse level has been installed to accommodate the concessions and washrooms for the new seating area. In addition, the pre-cast concrete for the new seats has been added, giving fans an idea of what the stands and stairways will look like when completed.

The second area of improvement is the dressing room area, where the majority of the masonry work has been completed. Additionally, framing is being added where the business offices and team facilities will be located. When completed, the Rangers’ dressing room will be expanded to the benches at ice level and walls have been constructed to accommodate this change.

“It’s exciting to go in and see the rooms forming,” says Chief Operating Officer and Governor of the Rangers, Steve Bienkowski. “It makes the architectural drawings come to life”.

The next step in the project will be the erection of trusses for the new roof over the expansion, which will be visible from the exterior of the building to passers-by. Once the final stages of the building’s skeleton are complete, the focus will turn to the removal of the existing roof lines from inside the building and eventually to the installation of electrical wiring, drywall and other interior fixtures.

The expansion project remains on schedule.

CLICK HERE to view the newest video update on Stage Five of The Aud Expansion Project 2012. Chief Operating Officer and Governor of the Rangers, Steve Bienkowski provides details on the project.

Stage Six of The Aud Expansion Project 2012 includes further progress on both the interior and exterior of the building.

Over the past five weeks, the new roof trusses have been installed and the expansion area has been covered with a new roof. This landmark stage in construction was completed on schedule on July 23rd, 2012 and as a result the Kitchener Memorial Auditorium is now closed to the public, and will remain so until October.

Inside the building, work continues on the business offices, including the installation of drywall. Concrete blocking continues in the area that will house the team dressing room. Fans driving past the building will also notice that the elevator shaft has been completed all the way to the rooflines.

Renovations in The Outpost, the official retail outlet of the Kitchener Rangers continue, including the installation of new windows and the completion of the floors. Soon, passers-by will notice a new exterior wall on the Ottawa Street side of the building.

The new concourse is developing with the addition of concession areas, restrooms and other guest facilities.

The next stage in the expansion project will involve the removal of the old roof over the arena. The concrete walls and roof below the new roof trusses will taken out, and the existing steel beams will be cut and lowered to ice level before being carried out from inside the building.

The Aud Expansion Project 2012 continues towards its completion in October 2012.

Stage Seven of The Aud Expansion Project 2012 involves the final milestone event being achieved – the removal of the old roof that previously covered the east side of the building.

The newly-added expansion is now nearing full enclosure. The exterior of the north end is complete, while the south end facing East Avenue is scheduled for completion in the next week. On the Ottawa Street side, stucco work has already begun.

Inside The Aud, the seating is being prepared for the new sections and the floors have been sealed. Stairs have been poured, and installation of the new seats is scheduled to begin on September 17. Railings have been constructed for the upper levels in accordance with new building codes and are currently being painted.

Looking ahead, the dressing room and business operations areas are nearing completion, with furniture and equipment expected to be installed in the coming weeks. In the arena, cleaning and cooling is scheduled to be completed in early October, at which point ice making will begin.

“We’re very excited and happy with how the entire project has moved forward since we began in February,” says Kitchener Rangers Chief Operating Officer Steve Bienkowski. “A lot of the credit goes to the various tradespeople who have worked diligently to meet the tight timelines.”

The Rangers will play their first game in the renovated Kitchener Memorial Auditorium on Friday, October 19, when they host the Oshawa Generals.