Team morale is a key part to the success of any team. It’s been proven time and again that success rises when individuals play as a group, rather than a group that plays as individuals.

Sure, talent doesn’t hurt, but to win over your brothers in the dressing room it takes more than that. Likability, respect, inspiration, and leading by example – these are just a few of the qualities that have belonged to the Rangers’ Most Popular Player. 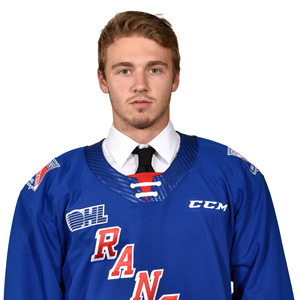 As this year’s co-captain, Greg recorded more than 30 goals for the second straight year.

As a result, he finished his Rangers career by breaking into the top 25 all-time in Rangers regular season scoring.

His leadership ability was often on display in clutch situations, as he tied for the team lead in game-winning goals in 2019/20.

The Jim Malleck Memorial Trophy for Most Valuable Player is named after former Director and Past President through the 1960’s and into the 1970’s, Jim Malleck. Awarded for the first time following the 1985-86 season, the Most Valuable Player award is one of the greatest honours to be bestowed upon a player. It is awarded to the player deemed to have the most profound impact on the team’s success. 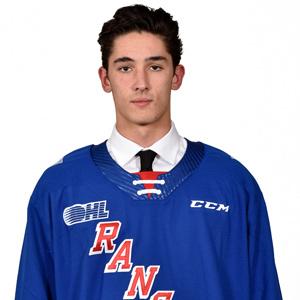 Jacob became the first goaltender since Scott Dickie in 2002/03 to lead the Ontario Hockey League in wins (33). His 1,501 saves were also ranked first and he finished in the top five in goals against average and save percentage

The LA Kings prospect was one of four goaltenders in the league to play more than 2,700 minutes. He is the first goalie in 11 years to receive the award.

The Jim Reilly Award for the team leader in scoring is named after Rangers past director, Jim Reilly. First awarded in the team’s inaugural season in 1963-64, the award has been won by 42 different players. Dwight Foster’s mark of 143 points in the 1976-77 season remains a franchise high for points in a season by a Rangers player. 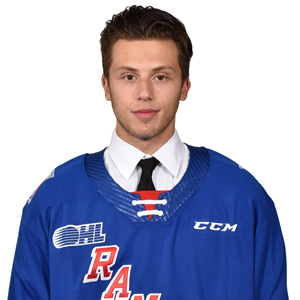 Riley finished the year with 78 points and also led the team in assists and power-play points. He recorded 22 multi-point games on his way to registering at least 50 assists and averaging more than a point per game for a second consecutive season.

A pair of eight-game point streaks also helped him surpass 200 points in his OHL career.

The Ted Scharf Humanitarian Award, sponsored by the Kitchener Sports Association, follows the KSA motto of “TRUE SPORTSMEN MAKE GOOD CITIZENS.” This award is in recognition of the Rangers player who contributed most to our community during the regular season. The award is named after alumnus and former Rangers President Ted Scharf, a leader himself in community efforts and involvement.

This season, Jacob participated in a number of team community initiatives, such as the Kitchener Rangers School Tour, while continuing his Jake Saves partnership with Canadian Blood Services and Hockey Gives Blood.

As an ambassador for blood donation, he also started the 68 Day Blood Drive to encourage blood and stem cell donation.

The Herchenrader Family Trophy for Best Defensive Ability was donated by former Director Alf Herchenrader and his family. As the old saying goes, defence wins championships. Certainly without it, it makes the road to winning a lot more difficult. Whether it be a quarterback on the power play, or a speedy sniper who jumps into the rush, a well-rounded blueliner is a focal point to the success of any club. 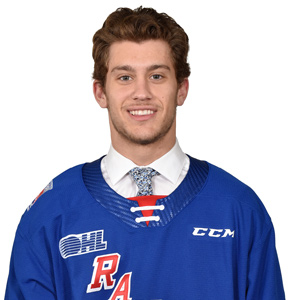 Michael has been a stalwart in the Rangers line-up and continued his iron man streak of appearing in every regular season game again this year.

Michael provided a solid mix of grit and an offensive touch. He was in the top three for scoring by a Rangers defenceman, which included a career-high four point game in December.

The award is named after Rangers’ former longtime assistant trainer Bob ‘Snowy’ Schlieman. An offensive defenceman can be a game changer for a team, providing secondary scoring from the back-end, or seamlessly jumping into the rush and confusing the opposition. Since first presented in 1991-92, 19 Rangers have earned the award. 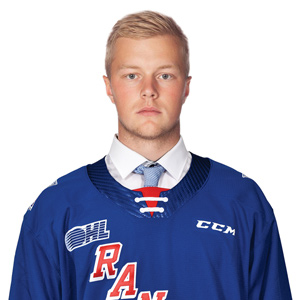 In his first season with the Rangers, Axel finished top five in team scoring and plus/minus while leading all defencemen in goals, assists, and points.

He is the first Rangers defenceman to record at least 40 assists and 50 points in a season since Ryan Murphy in 2011/12 and just the third import player to receive this award.

Rookie of the Year

The adjustment to the Ontario Hockey League from whichever league you played in before coming here is rarely an easy one. The Michael Pappert Memorial Trophy, named after a former Rangers Director from the 1960’s, acknowledges the efforts, accomplishments and great strides made by one of the Rangers rookies during the past season. 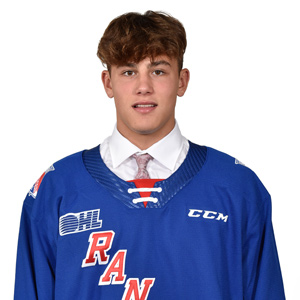 Francesco recorded his first career OHL point on a goal in his very first game and was one of two Rangers rookies to finish with at least 40 points.

He also finished in the team’s top ten for goals and assists during the regular season.

When ranked among OHL rookies, he came in fourth with 41 points.

Each time a Rangers player is chosen as 1st, 2nd or 3rd Star in a game, points are given to the player and accumulated at the end of the regular season; three points for 1st, two for 2nd and one for 3rd. The player with the most points earns the 570 News 3-Star Award.

This season, Jacob accumulated ten first-stars, four second-stars and two third-stars for a total of 40 points.

One of his first-stars this season was awarded after the team’s shutout of the London Knights in the annual Teddy Bear Toss game.

Jacob is the first Rangers goaltender since John Murray in 2006/07 to record at least 33 wins.

The Jim McGeachie Memorial Trophy is named in honour of former left-winger Jim McGeachie, who passed away suddenly in a car accident in the summer of 1980 at the age of 19 while a member of the Rangers.

The winner of this award exhibits outstanding effort, spirit and commitment to being a member of the Rangers. He exhibits competitiveness, as well as dedication to the game and to his teammates. 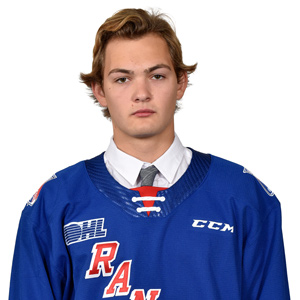 Declan was a model of consistency this season, playing in every regular season game and finishing tied for the fifth-most goals on the team.

He was also regularly involved with a number of community outreach programs.

From a historical perspective, he is the first Rangers rookie since Ben Fanelli in 2009/2010 to receive this award.

Our next award is presented to the player who best embodies sportsmanship and respect for the game in true Rangers fashion.

Axel’s maturity, leadership, and hard-working nature were on full display this season; not only by appearing in 62/63 regular season games but also being heavily involved in team events and appearances.

Of any Rangers player to appear in at least 60 regular season games this year, he recorded the least amount of penalty minutes. 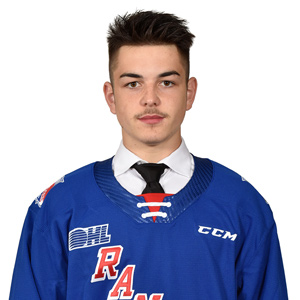 Arber became an even bigger fan favourite this season for his solid defensive play, toughness, and willingness to stand up for his teammates.

Aside from setting career-highs in goals, assists, and points, he led the team in penalty minutes while also finishing second in plus/minus. 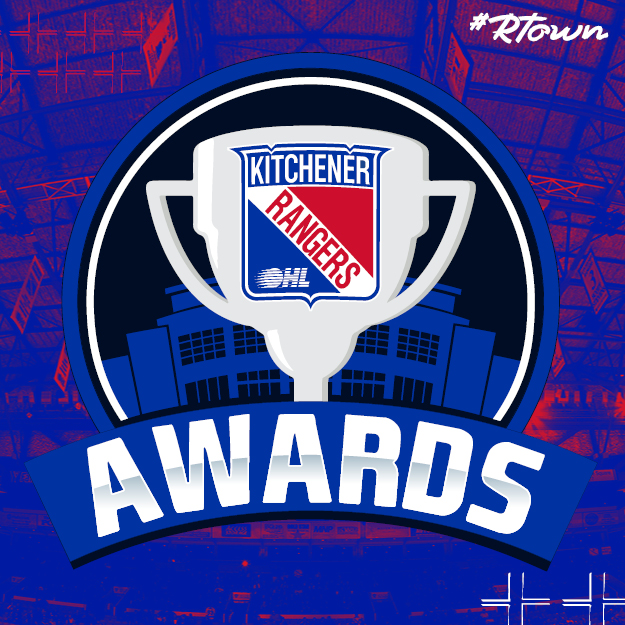 The Don Cameron Award is awarded to a Rangers player who reaches the 50-goal milestone during the regular season. It was presented for the first time in 1975-76, and has been presented 11 times to ten different players. The 50-goal mark was reached four other times, prior to the award coming into existence.

The last time the Don Cameron Award was presented to a Rangers player was to Jeff Skinner (50) in 2009-10.

Four times a season, the Rangers present a deserving player with the Robin’s Goldsmithing Academic Achievement Award. This award acknowledges a players drive to educational betterment and his efforts in the classroom.

Three times a season, the Rangers present a deserving player with the Channer’s Mens Apparel Outstanding Player Award. This award acknowledges a player who encompasses strong play on the ice, gives back to our community, and aims to better himself with education.

KMHA Product with Most Improvement

The Harold Gowing Memorial Award was presented to the Rangers player who previously played as a youth in the Kitchener Minor Hockey Association (KMHA) and showed the most improvement.

It was first awarded in 1967-68 and was earned 33 times. The award is no longer in circulation and was last presented to Jacob Cascagnette following the 2014-15 season.