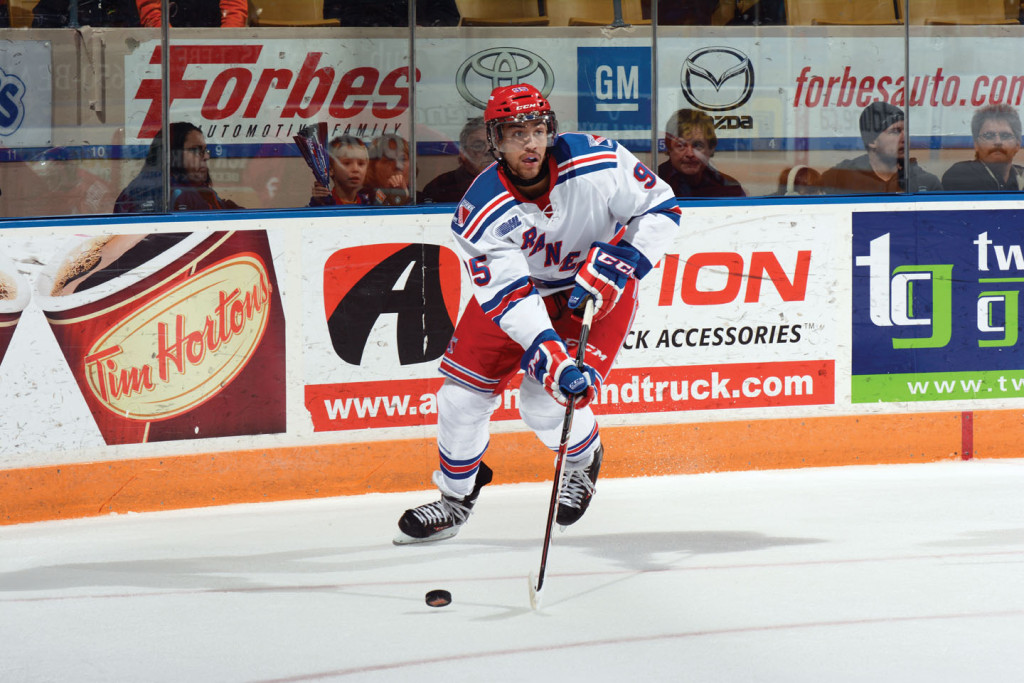 Justin Bailey scored a pair of goals for the Kitchener Rangers in a 6-5 shootout loss to the Niagara IceDogs on Saturday night. Brandon Robinson, Connor Bunnaman and Adam Mascherin also scored for the Rangers in the loss.

Justin Bailey put the Rangers on the board first, scoring less than eight minutes to play in the opening frame. The Buffalo Sabres prospect forced a turnover near the IceDogs blueline and bounced shot off starter Brent Moran, recording his team-leading 21st of the season.

Niagara scored a pair of goals late in the period to take a 2-1 lead. With six minutes remaining, Cody Payne’s shot was blocked by netminder Dawson Carty, but Billy Jenkins drove hard to the net to bury the rebound. His fourth of the year was also assisted by defenceman Ryan Mantha.

A 4-on-3 power play goal pushed the IceDogs their first lead with 2:10 left in the frame. Carter Verhaeghe set sophomore rearguard Blake Siebenaler up at the point. He beat Carty with a low shot to pick up his fifth of the season, with a secondary assist from Graham Knott.

Niagara led shots on goal 10-5 in the opening period.

Brandon Robinson pulled the Rangers even early in middle frame. Just two minutes into the period, the gritty winger picked up a pass from Darby Llewellyn and carried the puck down the wing, firing a long shot that beat Moran blocker-side. Blueliner Thomas Welsh also earned a helper on the play, Robinson’s 11th goal of the season.

Kitchener regained the lead just past the halfway point, jumping ahead 3-2. Bailey set up to play, picking off the puck at the boards and lacing a pass to rookie Connor Bunnaman in the slot. The Guelph, ON native snapped a wrist shot past Moran for the fourth goal of his career.

A similar play pushed the Rangers ahead 4-2 with less than three minutes to play. Import forward Gustaf Franzen forced the turnover, and fellow rookie Adam Mascherin fired a shot past the blocker of Moran to pick up his seventh of the season.

The Rangers led shots on goal 14-6 in the middle frame. Niagara elected to make a goaltending change during the intermission, sending Brandon Hope to the crease for the third period.

Siebenaler scored a pair of quick goals early in the third period, levelling the score at 4-4 and completing his first career OHL hat trick. His second goal of the game was a long shot from the blueline, assisted by Jenkins and Verhaeghe, the second point of the night for each.

Just 25 seconds later, Siebenaler launched another point shot high over Carty’s blocker, with help from veteran Jordan Maletta. The Columbus Blue Jacket prospect set a new career-high benchmark with the tally, his seventh of the season.

Bailey put the Rangers back in front with nine minutes to play, potting his second of the game on the man advantage. Defenceman Frank Hora set up the play with a quick backhand pass, and Bailey fired a heavy shot through Hope to net his 22nd of the year.

The IceDogs responded with a power play marker of their own less than four minutes later. Brandon Perlini netted his second in as many games with a high shot through traffic over the glove of Carty. Draft-eligible rearguard Vince Dunn and Josh Ho-Sang earned the assists on the play.

The third period ended in a 5-5 deadlock, sending the game to an extra frame. The Rangers led shots on goal 9-7 in the frame.

Neither team scored in the overtime period, and the game was decided in a shootout. Jenkins scored the lone goal in the fourth round to secure a 6-5 Niagara win.

The next Rangers home game is Friday, January 9 when we host the Belleville Bulls at 7:30pm. Tickets to all Kitchener Rangers home games are now available by phone at 519-578-1570 or 1-800-265-8977, via the internet at www.centre-square.com or in person at the Centre In the Square Box Office or the Kitchener Auditorium Box Office.