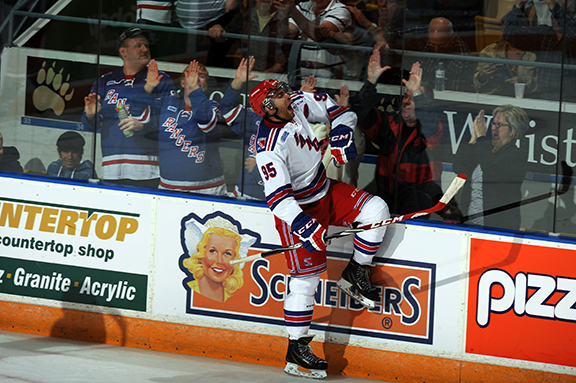 Justin Bailey scored twice for the Kitchener Rangers in a 6-3 loss to the Erie Otters on Sunday afternoon. Gustaf Franzen also recorded a goal for the Rangers, extending his scoring streak to a third game.

The Otters took an early lead, opening the scoring four minutes into the first period. Veteran centre Kyle Pettit picked up a pass from Darren Raddysh in the slot and snapped the puck over the right pad of starter Matthew Greenfield. Kurtis MacDermid also picked up an assist on the power play marker, Pettit’s tenth goal of the season.

Nick Baptiste stretched Erie’s lead to 2-0 near the midway point of the frame. The Buffalo Sabres prospect intercepted the puck inside of the Otters blueline and took off, racing through the neutral zone and beating Greenfield with a low shot. The unassisted tally was his tenth of the year.

The Rangers responded with less than five minutes to play in the period, capitalizing on the man-advantage. Justin Bailey picked off a clearing attempt in the Erie zone, waited for an opportunity and lifted a shot over the defender’s stick and past Daniel Dekoning. The Williamsburg, NY native leads the team with 19 goals this season.

Less than two minutes later, Kitchener added a second power play goal. Import forward Gustaf Franzen extended his scoring streak to a third game, corralling the puck at the Otter net and pushing it past Dekoning. The draft-eligible Swede’s ninth of the year was assisted by Nick Magyar and Dmitrii Sergeev.

Erie would regain its lead with just 30 seconds left in the period, off the stick of team scoring leader Dylan Strome, who broke out on the odd man rush, collected a pass from rookie Alex Debrincat and pitched a quick shot past Greenfield for his 22nd of the season.

The Otters jumped ahead 4-2 early in the middle frame, when Trent Fox’s backhand pass from the side of the net connected with Debrincat. The two-time OHL Rookie of the Month chipped a shot past Greenfield to record his 28th of the year, with a secondary assist from Baptiste.

The tally prompted the Rangers to make a goaltending change, as Dawson Carty was sent to the crease in relief of Greenfield.

Bailey’s second of the game pulled the Rangers within one late in the period. With the teams playing 4-on-4, Kitchener pulled Carty on a delayed penalty call to send out the extra attacker. The Buffalo Sabres prospect settled the puck as it bounced off the end board, burying a shot behind Dekoning for his 20th of the year. Captain Liam Maaskant picked up an assist, his fifth point of the season against his former team. Franzen also recorded a helper, his second point of the afternoon.

The Rangers out-shot the Otters 12-10 in the second period.

Debrincat scored his second of the game on the power play early in the final frame, pushing Erie ahead 5-3. The freshman collected the puck at the side of the net and squeezed it behind Carty’s right pad. Travis Dermott and Baptiste collected helpers on the goal, Debrincat’s league-leading 29th of the year.

Strome added his second of the afternoon with just over six minutes to play, firing a shot over the glove Carty and into the top corner of the Rangers net. Nick Betz earned the lone assist on the play.

Erie led shots on goal 13-11 in the third, however, the Rangers did finish with a 33-32 overall advantage on the shot clock.

The next Rangers home game is Friday, January 2 when we host the Niagara IceDogs at 7:30pm. Tickets to all Kitchener Rangers home games are now available by phone at 519-578-1570 or 1-800-265-8977, via the internet at www.centre-square.com or in person at the Centre In the Square Box Office or the Kitchener Auditorium Box Office.