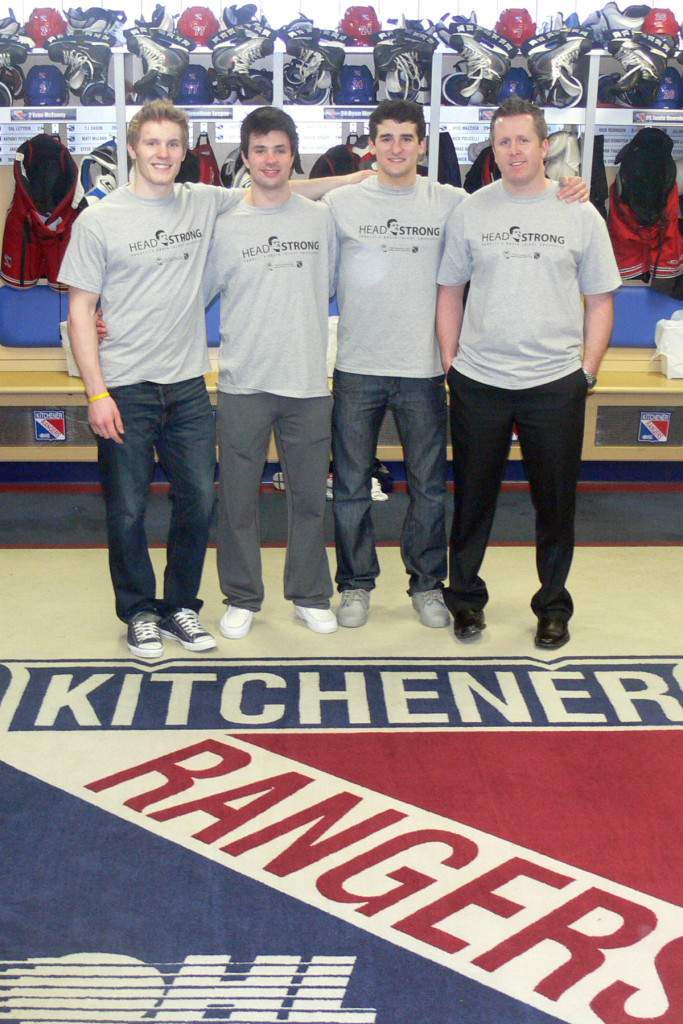 Almost everyone knows about Lance Armstrong’s battle through cancer to prove that nothing can slow him down. His story has become one of inspiration to many around the world, including the Kitchener Rangers’ Ben Fanelli.

That is why Ben in partnership with the Kitchener Rangers has developed HEAD STRONG, Fanelli 4 Brain Injury Awareness: a program designed to raise awareness about brain injuries.

“Lance Armstrong overcame something that no one thought was possible and I want to replicate that in a different way with my injury,” Ben says. “I planned to run this triathlon months ago because I needed another goal. I decided to turn it into something bigger and found an association I could support.”

That would be the Brain Injury Association of Canada (BIAC). Ben will be collecting pledges online (to make a donation, click the link below) and raising funds through the sale of a HEAD STRONG t-shirt, $20 including tax available at the Outpost, with proceeds going to the BIAC.

On June 5, 2011 Fanelli will swim, bike and run his way through the Subaru Triathlon being held in Milton, Ontario. He will participate in a 750m swim, a 30km bike ride and a 7.5km run and is asking for your support in raising funds for the Brain Injury Association of Canada (BIAC). Pledges for his cause can be online by clicking the link below or in person at the Kitchener Rangers office.

“A concussion is a brain injury now.  In my area of life, which is hockey. I want to make it known that there’s a way to help.”

Something that has definitely helped keep Ben motivated with these plans is the support he has had, starting with teammates Gabriel Landeskog and Ryan Murphy. “The three of us talked about it and (Murphy and I) said we can help you out and we can be your trainers,” Landeskog explains. “It’s one of those things we all wanted to do, and it’s really exciting.”

And when it comes to training, the three of them are always at it. “We’re probably the last ones leaving the rink,” Murphy laughs. “I am the vocal guy out there that keeps him going – Gabe is the guy who can work out with him. But we do our part and can’t wait to see him running, swimming and biking.”

Ben participated in his first triathlon a couple weeks ago, and now knows how hard he will need to push. “I know my body isn’t meant for triathlons, I’ve trained for hockey,” he says. “But everything I’ve done in my life I try to come out on top. I’m going to go as hard as I can the whole race.”

Ben also knows he has more than just the support of his family, coaches and teammates as he strives to achieve his goals, but also that of the Kitchener fans.

“It’s absolutely amazing to feel the support. I can’t even find words to describe it because of the respect I feel and the adrenaline it gives me to work harder, it’s amazing. At the same time, I need to show everyone that I will be back.”

So focusing on what he can do now, and helping a cause so close to his heart is what Ben is set on doing. He is proving what determination can do, just like his idol. And like Lance Armstrong, Ben is hoping this leads to something great.