Benefit Game Puts a Smile on Every Face 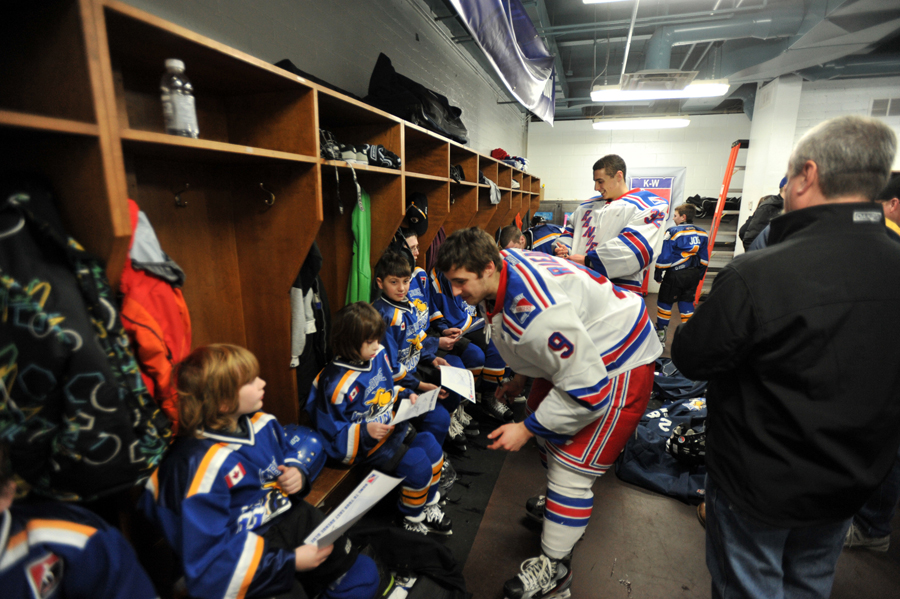 On Monday, January 16, a blockbuster trade was announced on the PA system at the 5th Annual Rangers vs. Cambridge Ice Hounds and Kitchener Ice Pirates Benefit Game, held at the Kitchener Memorial Auditorium.

Don’t be alarmed, Rangers fans – the move was temporary. For one night only, blueliner Ben Fanelli requested a trade to the Ice Hounds.

“Everyone was out there doing something to make the kids laugh and get the fans involved, so of course I wanted to get in on that,” he explained after his new team picked up a commanding win. “I thought I’d ask the coaches if I could join them and when we went in there to tell the team, the whole room lit up and we were all cheering. To bring that energy and emotion to kids that don’t always get to feel like that, it meant a lot to me.”

He wasn’t the only was switching things up. Veteran forward Ben Thomson wanted to try life between the pipes for the first time, so he and freshman goalie John Gibson switched positions and numbers for the special event. Neither excelled in their new position, but it didn’t matter.

The crowd, the players and even the on-ice officials were in on the fun on this special night. The refs repeatedly called the Rangers for too many men on the ice, but the young skaters couldn’t help themselves. Everyone wanted to be out there, making memories with the evening’s special guests.

Tobias Rieder received a two minute penalty “because he asked for it”, giving him a chance to interact with the young fans who crowded around to meet him. Asked how the night was going, he flashed an ear-to-ear grin and claimed to be having the most fun – a bold statement to make in a building filled with excitement.

Ice Hounds Head Coach and Director of Operations Cam Linwood says the Benefit Game is something that the visiting teams look forward to every year. One member of the Ice Pirates coaching staff revealed that his players were so excited that they arrived and were dressed over an hour before game time.

“It’s great to see the way it changes them on the ice,” said Linwood as his players completed a line change. “They play harder after this game – obviously this is a fun night, but this game means everything to them. They get to come out here and play in front of a thousand people. They’ve never played in front of a crowd like this.”

Included in that crowd was the hockey team from Resurrection Catholic Secondary School, who raised $500 dollars to donate to the teams on Monday. The Phoenix were out to support Cody Malone, a member of their organization who plays for the Ice Hounds. Equipped with signs that read “#3 on the ice. #1 in our hearts”, the players were seated at ice level behind the Rangers’ goal and erupted when Malone shoveled one by Thomson. They all agreed that there was nowhere they would rather be than out supporting their friend and enjoying the atmosphere at the rink.

Linwood called Monday’s event the best yet and took a moment to reflect on what it meant not only to his players, but to everyone who participated.

“When I look at the way this event has grown, I also see what the Rangers get out of it. The smiles on the faces out there tell the whole story. It’s an incredible experience for everybody.”

Fanelli echoed that sentiment as he stood surrounded by fans and teammates, unable to wipe the smile off of his face. “I love this. I wish we could do this every day. You feel like a million bucks out there bringing joy to people.”

The joy was contagious. Everyone who left The Aud Monday night had a smile on their face and a wealth of happy memories – including the evening’s improbable goaltender.

“It’s a memorable 19th birthday for Ben” noted Rangers Associate Coach Paul Fixter as Thomson dove for a puck (and missed, to the delight of the kids). Asked if he would be using the power forward between the pipes again, Coach laughed as he shook his head.

“No. Not even in practice.”

For more information on this event or the Cambridge Ice Hounds, please visit: http://www.cambridgeicehounds.com