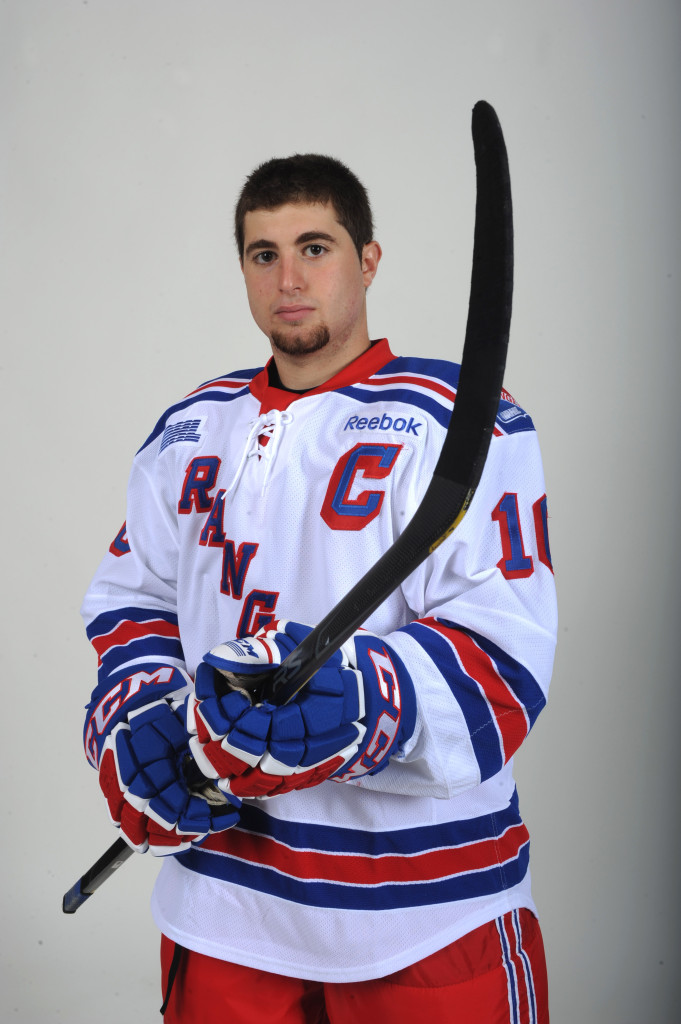 Four point afternoons from Michael Catenacci and Tobias Rieder led the Kitchener Rangers to a 6-1 victory over the Guelph Storm on Sunday. The captain scored twice and added two helpers and was named the game’s first star. Linemates Rieder and Ben Thomson also recorded goals for Kitchener.

The Rangers struck first, lighting the lamp less than five minutes into the opening frame. Michael Catenacci’s pass found Tobias Rieder to the left of Guelph goaltender Garret Sparks. The German import spun around a defender and lifted a backhand shot over the netminder for his 35th of the season. Winger Ben Thomson also assisted on the play.

Kitchener’s top line connected again near the midway point of the first. The Rangers raced in on the odd man rush and Rieder had time to fire a shot that slid under Sparks into the goal crease. Catenacci was on the doorstep to tip the loose puck into the net and collect his 22nd of the year. Thomson was also credited with an assist, his second point of the contest.

The Rangers added a third goal before the end of the period. Sparks made the initial save on Rieder, but the rebound bounced onto the stick of Thomson who snapped it in glove-side. Catenacci picked up a helper on Thomson’s 10th of the year, giving all three top-line forwards three points in the period.

Kitchener out-shot Guelph 15-12 through the opening 20 minutes of play.

Catenacci scored his second of the game four minutes into the middle period, with the Rangers on the man-advantage. Andrew Crescenzi moved the puck to the captain, who was open and waiting beside the Guelph net and he fired a shot over the glove-hand of Sparks. Ryan Murphy also assisted on Catenacci’s career-high 23rd of the year.

That power play marker would lead to a Storm goaltending change. Brandon Foote was sent in relief of Sparks after the Toronto Maple Leafs prospect allowed four goals on 17 shots.

The remainder of the second period was quiet until the final minute. With 14 seconds left on the clock Crescenzi was on the receiving end of a centering pass from Rieder and potted the puck into the open side of the cage. The goal was his sixth in four games and 21st of the season. Also assisting on the play was overage rearguard Cody Sol.

The Storm led shots on goal 18-5 in the second period.

Guelph would finally get on the board six minutes into the final frame on an individual effort from Jason Dickinson. He picked up loose puck inside Rangers’ blueline and unleashed a shot from the high slot that soared over the glove hand of Kitchener netminder Franky Palazzese for his eighth of the season.

Kitchener would re-establish a five-goal cushion near the halfway mark of the period. Radek Faksa’s cross-ice pass slid by Eric Ming, but the sophomore winger tracked it down, spun and fired a low, fast shot that bounced by Foote. Ming’s ninth of the year was also assisted by freshman blueliner Jared Gilbert. Faksa continues to lead OHL rookie scoring with 52 points this season.

The Storm continued to out-shoot the Rangers by a 14-10 margin in the final period of play and finished with a 44-30 overall advantage.

Palazzese made 43 saves in his 19th win of the season and was named the game’s third star. Foote stopped 11-of-13 in relief of Sparks.

The Rangers have won all six of their meetings with Guelph this season and sit in third place in the Western Conference with a 37-17-1-1 record. The loss drops the Storm to 23-27-2-3.