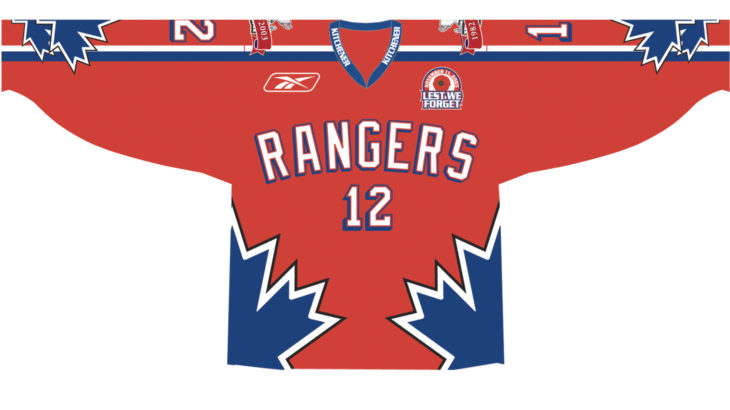 The first-ever Commemorative Remembrance Day jersey design represents Canada with its maple leaf imprints, while paying tribute to those who fought for us in battle with a special logo over the left chest. The jersey also recognizes the Rangers’ two Memorial Cup Championship teams with an emblem on both shoulders. 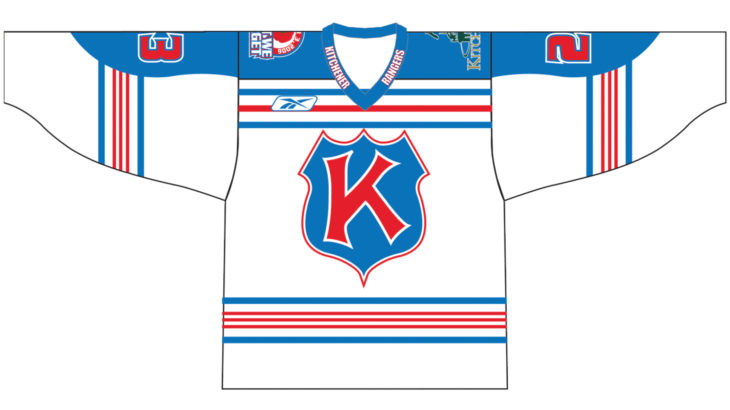 Based on the 1936 Kitchener Greenshirts jersey, our 2006-07 Commemorative Remembrance Day jersey represents our local hockey history, including Royal Canadian Air Force veterans Bobby Bauer, Milt Schmidt and Woody Dumart. The design also commemorates those that fought battle throughout the years and still fight today for our freedoms. 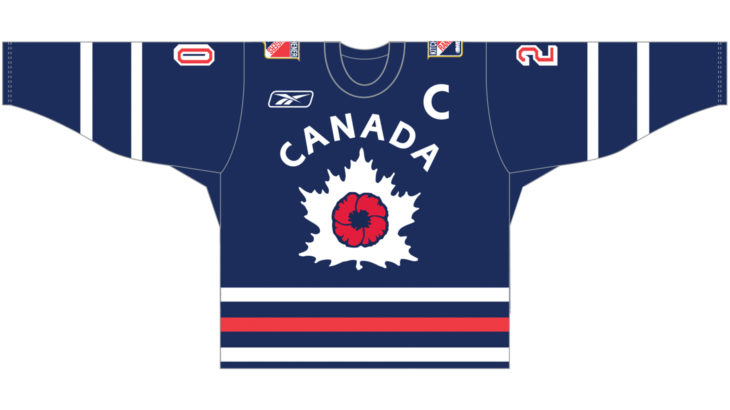 This special jersey displays the Remembrance Day theme and honours the 1956 K-W Dutchmen Canadian Olympic Hockey Team. The jersey was designed to be fully crested, with Rangers shields on the shoulders and the maple leaf with a poppy centered on the chest.

As well, in 2008 the Kitchener Rangers hosted the Mastercard Memorial Cup. As part of that event, the Rangers created a commemorative jersey that would be worn for the opening game and benefit local charities. The jersey featured a crest inspired by Lord Kitchener which was eventually used as the front crest of the Rangers third jersey. Following the 2008 Memorial Cup in Kitchener, a commemorative jersey has been created and used for all opening games in the tournament. Now a tradition in the CHL. 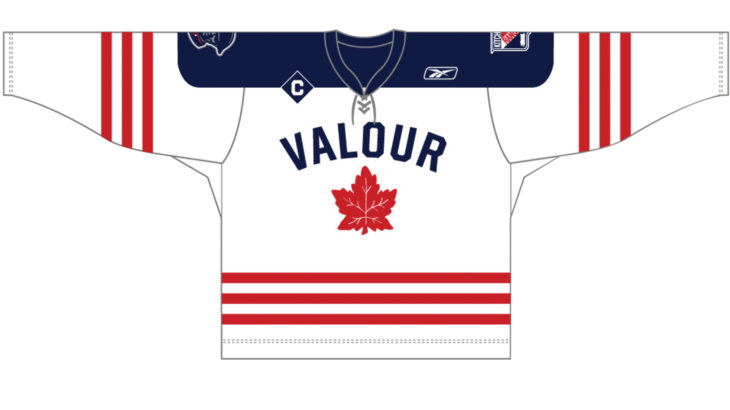 This design was based on the jersey that armed forces personnel wore in Europe during and after WWII. The three stripes replicate the stripes on the ribbon of the Medal of Military Valour, awarded to members of the Canadian Forces or allied forces serving with Canadian Forces for “an act of valour or devotion to duty in the presence of the enemy”. 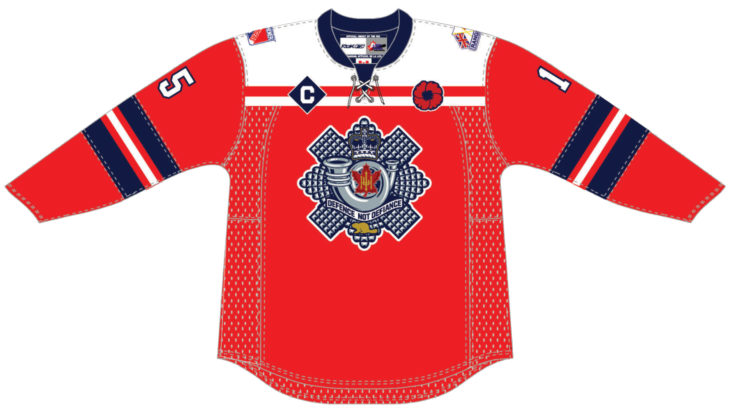 The Highland Light Infantry of Canada had its headquarters in Galt and mobilized in the 1940’s. Their motto, Defence not Defiance, is proudly displayed on their badge, which is featured on the front of the 2009 Remembrance Day jerseys. 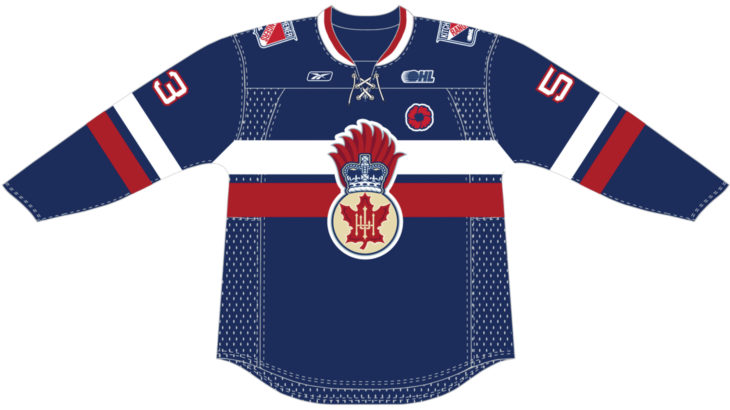 The 2010 commemorative jersey paid tribute to the Royal Highland Fusiliers of Canada, a reserve regiment that has two armouries, one in Cambridge and one located beside the Kitchener Memorial Auditorium. The crest featured on the front is the regiment’s cap badge. 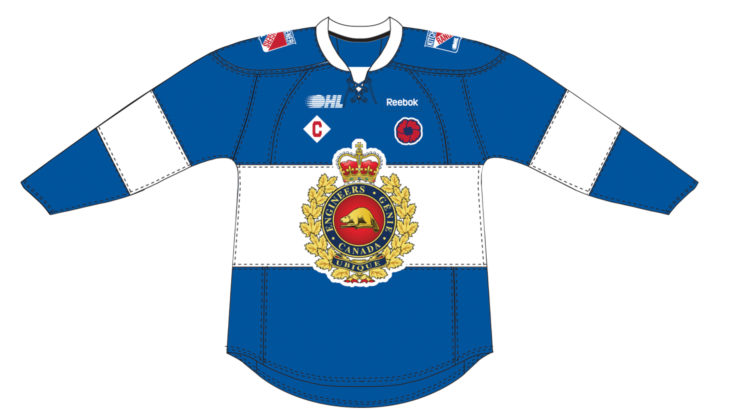 The 2011 commemorative jersey pays tribute to the 31 Combat Engineer Regiment (The Elgins), and the 48 Engineer Squadron of Waterloo, active from World War II until 1965. In 2004, the army reactivated the Squadron and many of its members completed overseas tours of duty with Canada’s Regular Force. The crest featured on the front of the jersey is the Canadian Military Engineers’ Branch Crest. 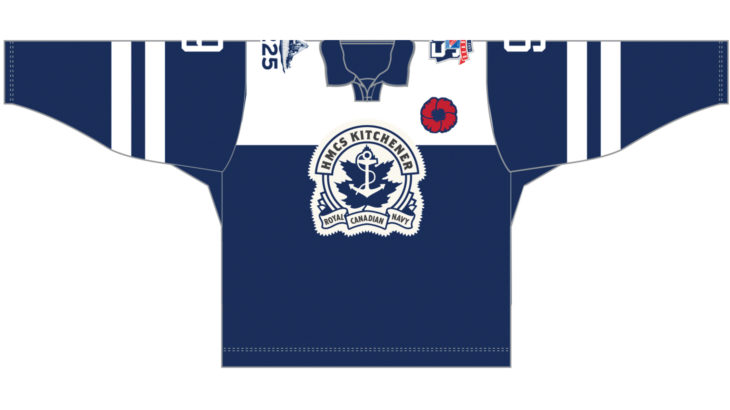 The Waterloo Region boasts a proud naval tradition: nearly 7,000 members of the Women’s Royal Canadian Naval Service trained at HMCS Conestoga in Galt during World War II, and four World War II naval vessels were named after communities in our region. The 2012 Remembrance Day jersey features an image of the HMCS Kitchener, the only Canadian corvette to participate in the D-Day invasion of Normany. 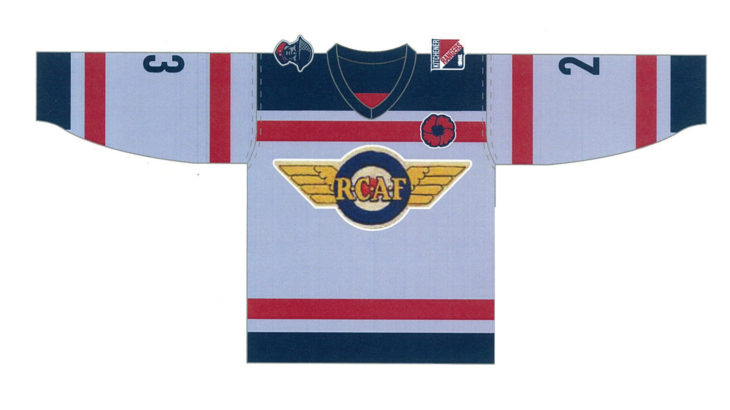 The 2013 Remembrance Day Commemorative Jersey pays homage to the Royal Canadian Air Force, its service men and women, and its tremendous hockey legacy. The sweater colours are inspired by the jerseys worn by athletes like Bauer, Schmidt and Dumart and the numbers and font are replicas of those found on RCAF aircrafts and ships. 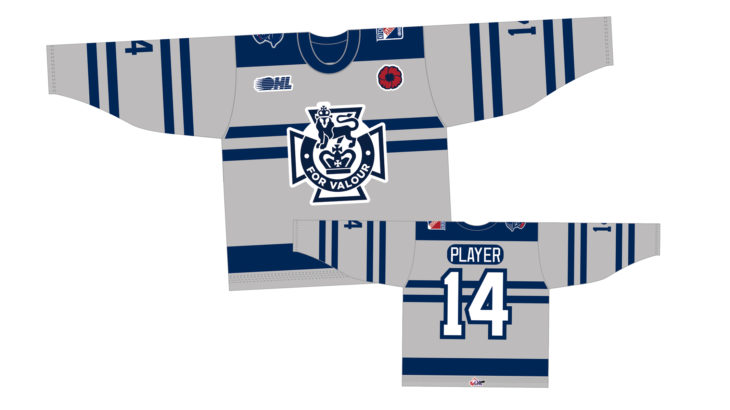 The 2014-15 sweater was inspired by the Victoria Cross, the British Commonwealth’s highest honour for conspicuous bravery, valour or sacrifice in the face of the enemy. This most famous British military valour decoration was introduced in 1856, and was awarded to 64 Canadians for actions during World War I. 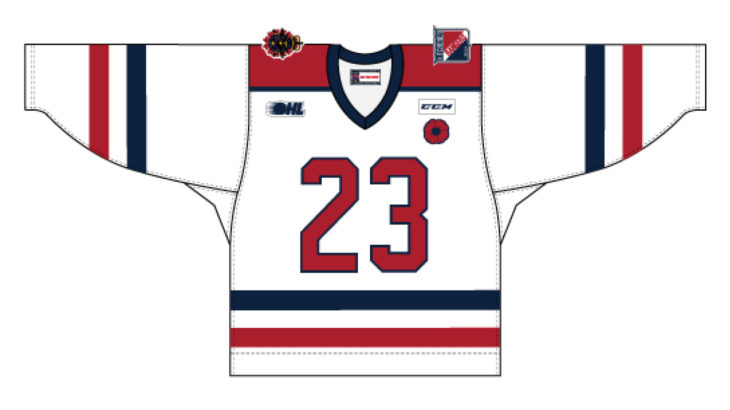 The 2015 Remembrance Day Commemorative Jersey is inspired by the jerseys worn by the Kitchener-Waterloo Dutchmen in the 40’s and 50’s. The sweater pays tribute to all of the service men and women who have been a part of the Canadian Forces. 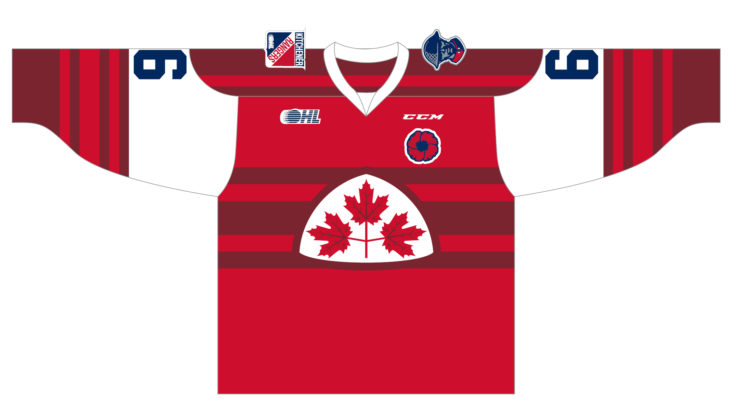 The 2016 Commemorative Remembrance Day Jersey Crest is inspired by the Canadian Women’s Army Corps.
The sweater pays tribute to all of the service women and men who have been a part of the Canadian Forces. 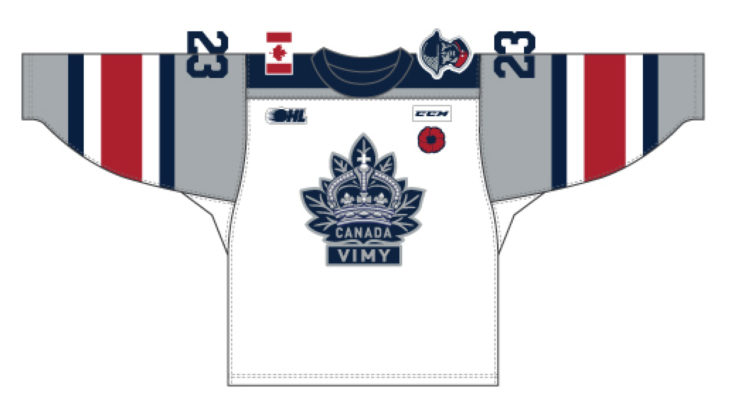 The 2017 Commemorative Remembrance Day Jersey Crest is inspired by the 100th Anniversary of the Battle of Vimy Ridge. Modeled after a badge that was given out at a ceremony to honour veterans of the battle at the openeing of the Vimy Ridge Memorial.

The 2018 Commemorative Remembrance Day Jersey is inspired by the 100th anniversary of the armistice ending World War I. On November 11, 1918, the ringing of church bells erupted spontaneously as an outpouring of relief that the war had come to an end. The front crest features the Dove, a symbol of peace, with a bell adorning the right shoulder of the jersey. 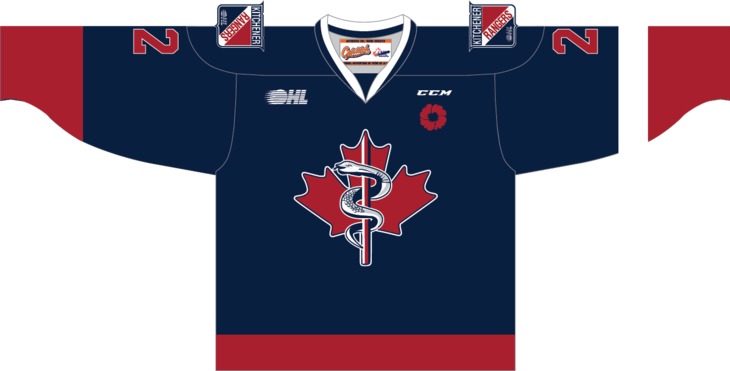 The 2019 Commemorative Remembrance Day Jersey was inspired by 16-year-old Daniel Kreller. He wrote us with his idea to pay tribute to his great grandfather:

The front crest of the 2019 jersey features the rod of Asclepius over a maple leaf, while the left arm has a white stripe simulating a Red Cross armband.

The colours used are close to those worn on the berets of the CAMC following the Second World War. As always, a poppy is positioned over the left chest.