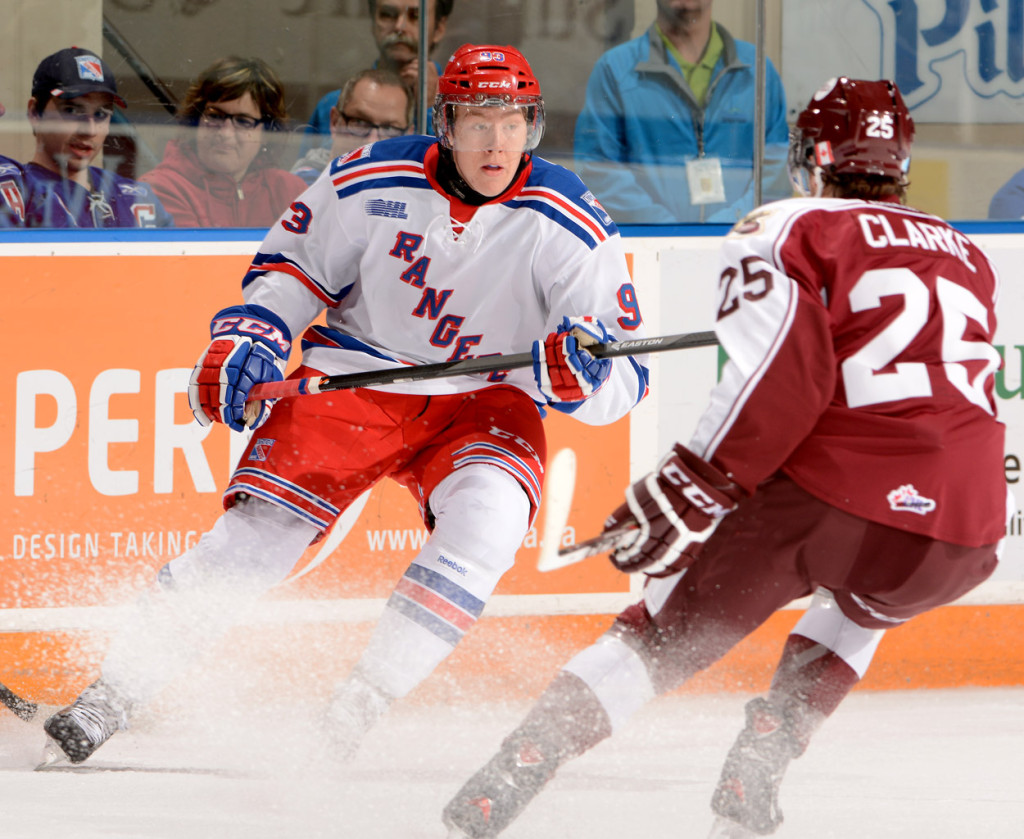 Mike Davies and Mason Kohn each scored their first Ontario Hockey League goals for the Kitchener Rangers in a 6-3 loss to the Guelph Storm on Tuesday. Radek Faksa also scored for the Rangers in the loss, extending his recent scoring streak to three games.

The Rangers jumped to an early lead, scoring just 23 seconds into the opening period. Radek Faksa snapped a quick shot under Storm goaltender Justin Nichols to record his eighth goal of the season. The Czech-born centre now has points in three consecutive contests, and continues his point-per-game pace in his career versus Guelph (16 points in 16 career regular and postseason games). Ben Thomson was credited with an assist on the play.

Guelph evened the score before the five minute mark of the frame. Brock McGinn jumped on a rebound in front of new Rangers netminder Jordan DeKort, sliding it behind his paddle to tally his 11th of the season. Robby Fabri and Jason Dickinson picked up the helpers on the goal, which extended the Carolina Hurricanes prospect’s scoring streak to 11 games.
Veteran Scott Kosmachuk notched his team-leading 13th goal of the season when Ben Harpur’s shot bounced off his shoulder in front of the net and redirected past DeKort. The Winnipeg Jets prospect’s fifth goal in two games was also assisted by Phil Baltisberger at 6:55.

The Storm led shots on goal 16-9 through the first 20 minutes.

McGinn’s second of the night pushed the Storm to a two-goal lead early in the second period. After rearguard Matt Finn’s shot bounced wide, McGinn collected it in his skates and chipped into the top corner of the net for his 12th of the year. Fabbri earned his second point of the night with a helper on the play.

Mike Davies’ first career Ontario Hockey League goal pulled Kitchener within one with seven and a half minutes remaining before the intermission. The Rangers’ first-round pick in the 2013 Priority Selection, Davies picked up a crisp pass from Matia Marcantuoni in front of the Storm net, shovelling it past Nichols to earn the important marker. Brent Pedersen also picked up a point on the goal.

Overage forward Zack Mitchell quickly restored Guelph’s two-goal cushion with an unassisted shorthanded tally at 15:40. The veteran winger jumped on a turnover in the Rangers zone, racing it behind the defence and slipping a shot between the pads of DeKort for his sixth of the year.

The Storm continued to out-shoot the Rangers in the second period by a 17-13 margin.

McGinn completed the hat trick near the midway point of the final period to give Guelph a 5-2 lead. Fabbri set up the tally with a long pass from the circle across the front of the crease, where the Fergus, ON native was waiting to chip it past DeKort. Dickinson collected his second assist of the night on the goal.

A second Rangers rookie hit the scoresheet in the third period, cutting the Storm’s lead to two. Mason Kohn scored his first career goal with a quick, long shot that sailed past Nichols. The Davie, FL native committed to Kitchener in the offseason after the Rangers selected him in the 10th round of the 2013 OHL draft.

A late goal from defenceman Ben Harpur sealed a 6-3 Guelph victory. Hunter Garlent and Nichols each earned an assist on the veteran blueliner’s first of the season.

The Rangers led shots on goal 13-9 in the final period of play, but the Storm did finish with a 42-35 overall advantage. DeKort made 29 saves in his first start since joining the Rangers in a trade with Windsor last week.

The Rangers hit the road Thursday for a 7:00pm meeting with the London Knights. The team returns to the Kitchener Memorial Auditorium on Friday, October 25 for their annual Remembrance Day Game at 7:30pm against the Windsor Spitfires. The game-worn jerseys will only be available for fans to own through silent auction during the game in the Subscribers Lounge. Tickets to Rangers home games are available by phone at 519-578-1570 or 1-800-265-8977, via the internet at www.centre-square.com or in person at the Centre In the Square Box Office or the Kitchener Auditorium Box Office.