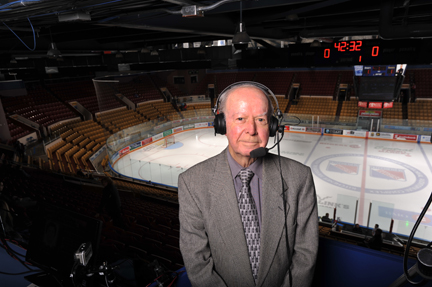 The Kitchener Rangers Hockey Club congratulates Don Cameron, the long-time radio voice of the Rangers, on being named a 2013 recipient of the Radio-Television News Directors Association Lifetime Achievement Award.

Cameron has been bringing Kitchener Rangers hockey into local homes for 50 seasons and continues to serve as the play-by-play voice of the team for 570 News. He is also the face of one of the organization’s yearly community initiatives: the 16th Annual Don Cameron Potato Night was held in February, with the Prince Edward Island native encouraging fans to donate to the House of Friendship.

The RTDNA’s Lifetime Achievement Award was created in 2002, and is one of the most prestigious honours conferred by RTDNA Canada. Recipients are individuals who have set themselves apart through ‘outstanding service and continued excellence during the course of their career in broadcast journalism’ and recognizes those with decades of distinguished service.

Cameron and his fellow recipients will be recognized at the RTDNA National Awards Gala, to be held in Toronto on Saturday, June 15.

Congratulations Don and thank you for your contributions to the Kitchener Rangers and to our community.