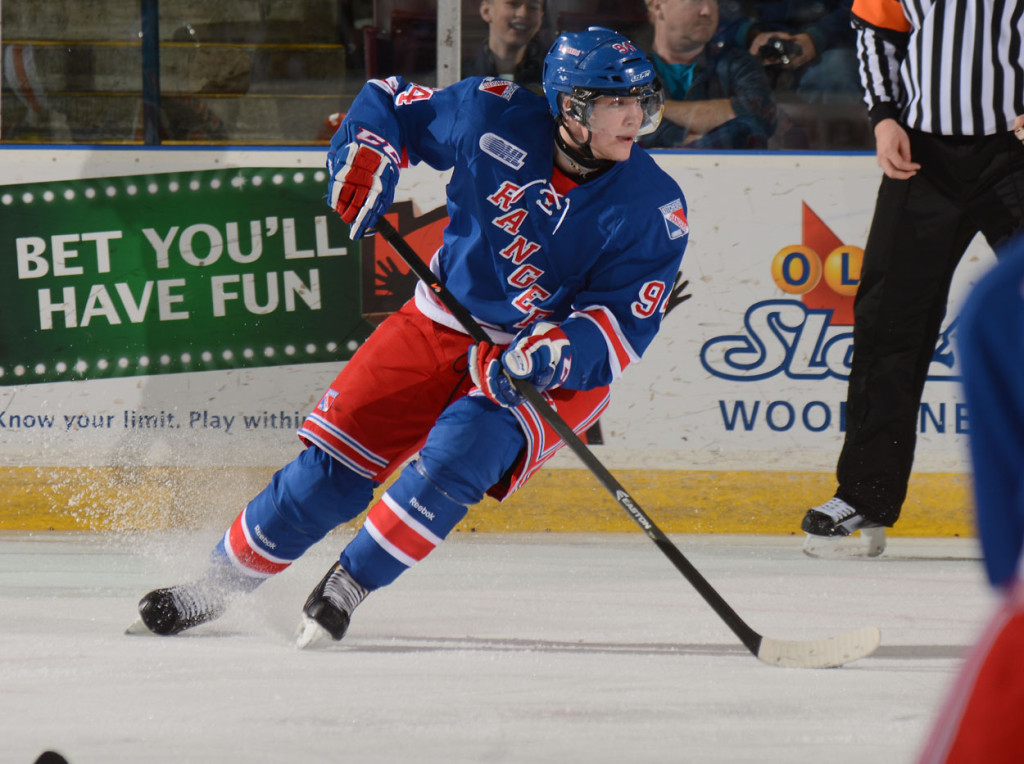 Radek Faksa scored twice to lead the Kitchener Rangers to a 6-2 road victory over the Belleville Bulls on Wednesday night. Justin Bailey and Nick Magyar each picked up a pair of assists and Jordan DeKort made 35 saves for the Rangers in the win.

The Bulls took a quick lead, scoring 38 seconds into the opening frame. Sophomore winger Michael Cramarossa picked up a rebound beside the Kitchener net, burying a wraparound shot behind the left skate of goaltender Jordan DeKort. The Markham, ON native’s fifth goal of the season was assisted by Adam Bignell.

Third year winger Brent Pedersen tied the game at one goal apiece with his 11th of the season. Nick Magyar wired a crisp pass from the corner onto the stick of the Carolina Hurricanes prospect, and he quickly unloaded a shot that soared past the glove of Charlie Graham. Magyar’s assist was also his team-leading 30th point of the year.

Belleville led shots on goal 12-6 in the opening 20 minutes.

The 1-1 deadlock endured late into the second period, until veteran centre Radek Faksa scored to put the Rangers ahead. Curtis Meighan set up the Czech-born pivot, carrying the puck behind the net before switching directions and moving a short backhand to Faksa. He chipped a shot over the pad of Graham for his 15th of the year and first since returning from the IIHF World Junior Championship.  Meighan’s assist was his third point in his last two games. Justin Bailey also assisted on the goal at 18:45.

The Bulls continued to out-shoot the Rangers in the second with a 14-12 advantage.

Defenceman Max Iafrate pushed Kitchener’s lead to 3-1 two minutes in the third period. Ryan MacInnis fed the puck to the four-year veteran at the slot, and he snapped a shot past traffic, through the five-hole of Graham. Magyar picked up his second helper of the game on Iafrate’s fifth of the season.

A Bulls turnover allowed the Rangers to jump ahead by three goals just 69 seconds later. Pittsburgh Penguins prospect Matia Marcantuoni found second year winger Darby Llewellyn all alone in front of the net and he lifted the puck high over Graham for his team-leading 20th of the year.

Faksa scored his second of the game on the power play to give Kitchener a 5-1 lead. The Dallas Stars’ prospect found space on the short side, under the elbow of Graham to pick up his 16th of the year. Captain Ben Fanelli and Bailey assisted on the play.

Rookie Mike Davies scored his second career OHL goal midway through the frame, giving the Rangers a 6-1 advantage. The Rangers’ first round pick in the 2013 Priority Selection walked in from the blueline and found the top corner of the net over the blocker-side shoulder of Graham.

The tally prompted a goaltending change as Belleville sent Jason Da Silva to the crease in relief of Graham, who allowed six goals on 24 shots.

The Bulls added a second goal late in the frame. Justin Bean recorded his first career Ontario Hockey League goal with a long shot from the point that dribbled between the pads of DeKort. Jake Marchment and Aaron Berisha picked up the helpers on the goal at 17:41.

The Bulls out-shot the Rangers 11-10 in the third and finished with a 37-28 overall advantage, but DeKort stopped 35 shots to secure his sixth win of the season.

The Rangers return to the Kitchener Memorial Auditorium on Friday, January 10 to host the Niagara IceDogs at 7:30pm. Tickets to Rangers home games are available by phone at 519-578-1570 or 1-800-265-8977, via the internet at www.centre-square.com or in person at the Centre In the Square Box Office or the Kitchener Auditorium Box Office.