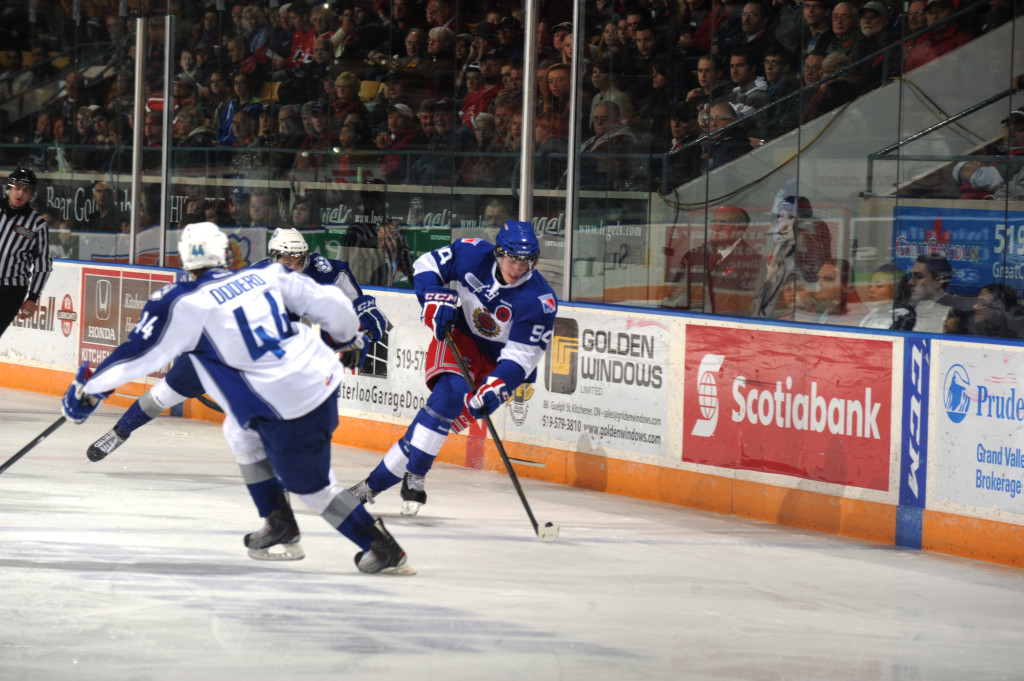 The Kitchener Rangers defeated the Sudbury Wolves 4-3 at the Kitchener Memorial Auditorium on Friday night. Radek Faksa scored the game winner, while Franky Palazzese picked up his first home win between the pipes for the Rangers.

Prior to the game, the Rangers paid tribute to the brave men and women of the military in a Remembrance Day ceremony and donned special commemorative jerseys in honour of our veterans. 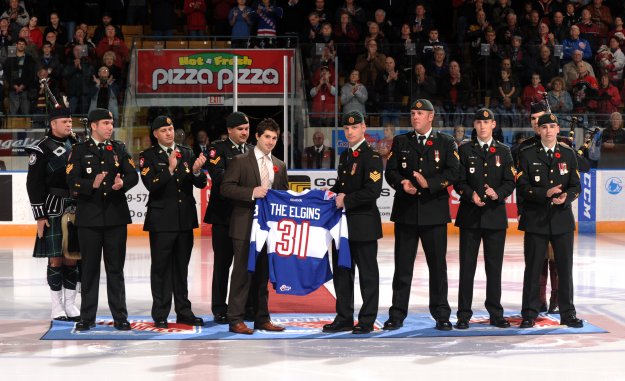 Kitchener opened the scoring with a power play goal at 12:19 of the first period. Matia Marcantuoni collected a rebound in front and lifted it high blocker-side over Joel Vienneau. The sophomore centre’s fifth of the year was assisted by Cody Sol and Tobias Rieder.

Sudbury would pull ahead with two goals less than two minutes apart. Sergey Kuchin capitalized on the man-advantage, firing the puck over the glove hand of Kitchener netminder Franky Palazzese to even the score at 17:27. Michael Sgarbossa and Vienneau assisted on the play.

Sgarbossa added a goal of his own with under a minute to play in the period. The solo effort was his seventh goal of the year and gave Sudbury a 2-1 lead.

The Wolves out-shot the Rangers 15-14 in the opening frame.

Ben Thomson evened the score midway through the second period, streaking in and beating Vienneau with a hard, low shot. The third-year winger has four goals this season. Marcantuoni was credited with an assist and picked up his second point of the night.

Kitchener took a 3-2 lead with just over five minutes to play in the frame. Tobias Rieder scored his team-leading eleventh of the season on the power play, assisted by Julian Melchiori and Radek Faksa. The German forward’s second goal in as many games brings his season point total to 21. 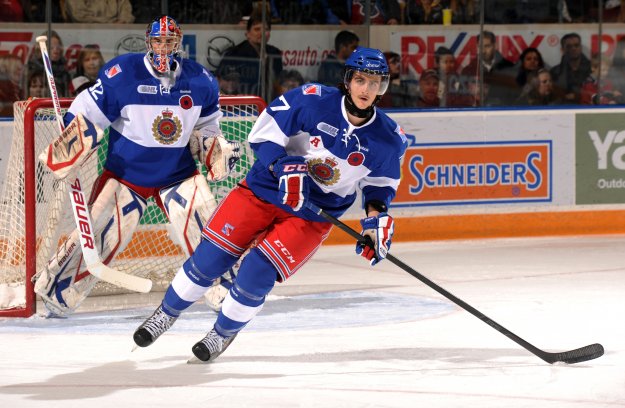 The Rangers held a slight advantage in shots on goal in the second, out shooting Sudbury 13-12.

Kuchin notched his second goal of the game just over a minute into the third, going low, blocker-side to tie the score at three-all. Assisting on the goal were Brody Silk and Frank Corrado.

Kitchener regained the lead on a power play marker from Faksa, who has six goals in his last eight games. The Czech import’s ninth of the year was assisted by Melchiori and Andrew Crescenzi, who extended his point-scoring streak to eight games.

The Wolves out-shot Kitchener 12-5 in the final period of play, but Palazzese stood strong, stopping 37 of 40 shots and picking up his first home win as a Ranger.

Kitchener’s weekend home stand continues when they host the Guelph Storm this Sunday, November 13 at 2pm. Tickets may be purchased by phone at 519-578-1570 or 1-800-265-8977, via the internet or in person at The Aud Box Office or Centre in the Square Box Office.