Faksa Scores a Pair to Lead Rangers Past IceDogs 4-3 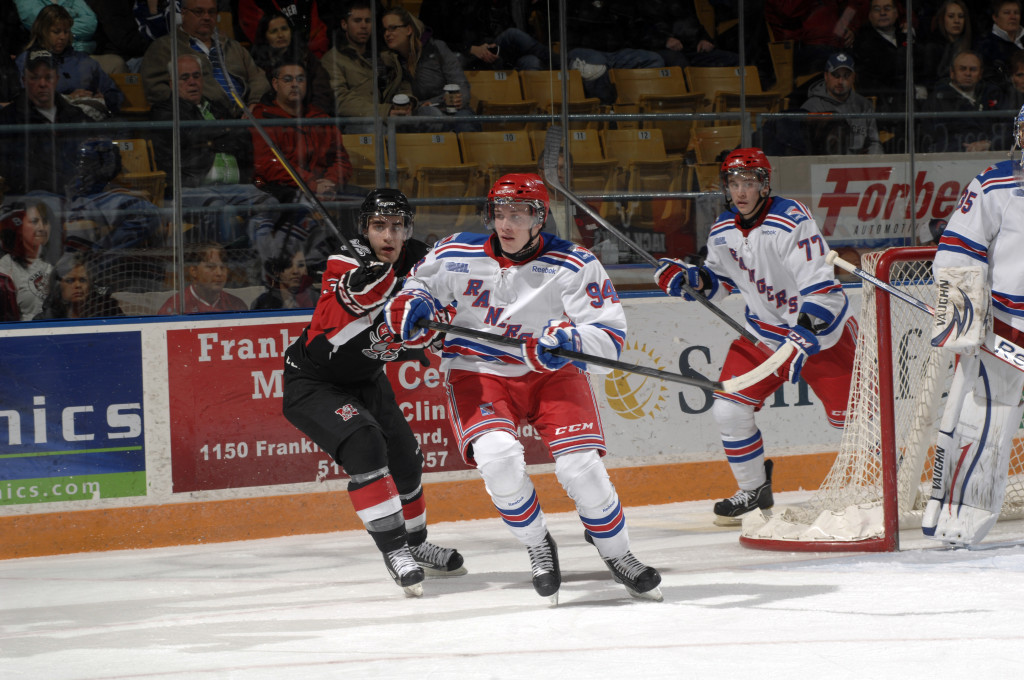 The Kitchener Rangers defeated the Niagara IceDogs 4-3 at the Aud on Friday night. Radek Faksa scored twice and extended his point streak to five games.

The Rangers got off to a fast start, when Brandon Francisco found Andrew Crescenzi racing in alone to the right of IceDogs netminder Mark Visentin. Crescenzi’s eighth goal of the season came just 56 seconds in to the first period. Team scoring leader Tobias Rieder also assisted on the play.

Shots on goal were even at nine through one period of play.

Kitchener capitalized on a lengthy five-on-three power play early in the second period. Vistenin stopped Ryan Murphy’s shot, but Tobias Rieder picked up the rebound, carried it behind the net and fed it to a waiting Matia Marcantuoni, who buried blocker-side. The goal was the second-year centre’s fourth of the season.

The IceDogs got one back with less than eight minutes to play in the frame. Alex Friesen fired the puck high past goalie John Gibson to cut the Rangers’ lead to one. David Pacan was credited with a helper on Friesen’s fourth tally of the year.

The Rangers out-shot the Rangers 16-8 in the second period.

Kitchener pushed their lead to 4-1 with a short-handed goal at 4:20. Ben Thomson’s shot was stopped by Visentin, but Faksa was on the doorstep to bang in the rebound.  The first-year winger has recorded five goals and four assists in his last five games.

Friesen added a second goal for the IceDogs midway through the period to cut the Rangers’ lead to two. His fifth of the season was assisted by Shayne Rover.

Niagara forward Ryan Strome continued his strong play, adding an unassisted goal with just over five minutes remaining. The New York Islanders prospect has recorded at least one point in every game he has played since being returned to the IceDogs in October. He’s recorded eight goals and five assists in ten games this season.

The IceDogs led shots on goal in the third 16-7, and finished with a 33-32 overall advantage.

This home-and-home series continues Saturday, November 5th when Kitchener travels to Niagara for a 7pm start. The weekend road trip also takes the team to Oshawa on Sunday, November 6th for a 6pm meeting with the Generals. The Rangers return to home ice on Friday, November 11th when the Sudbury Wolves visit the Aud for the Rangers 7th Annual Commemorative Jersey Auction. Game time is 7:30 pm. Tickets may be purchased by phone at 519-578-1570 or 1-800-265-8977, via the internet or in person at The Aud Box Office or Centre in the Square Box Office.