Fun is the Word on Hockey Day in Rangers Nation 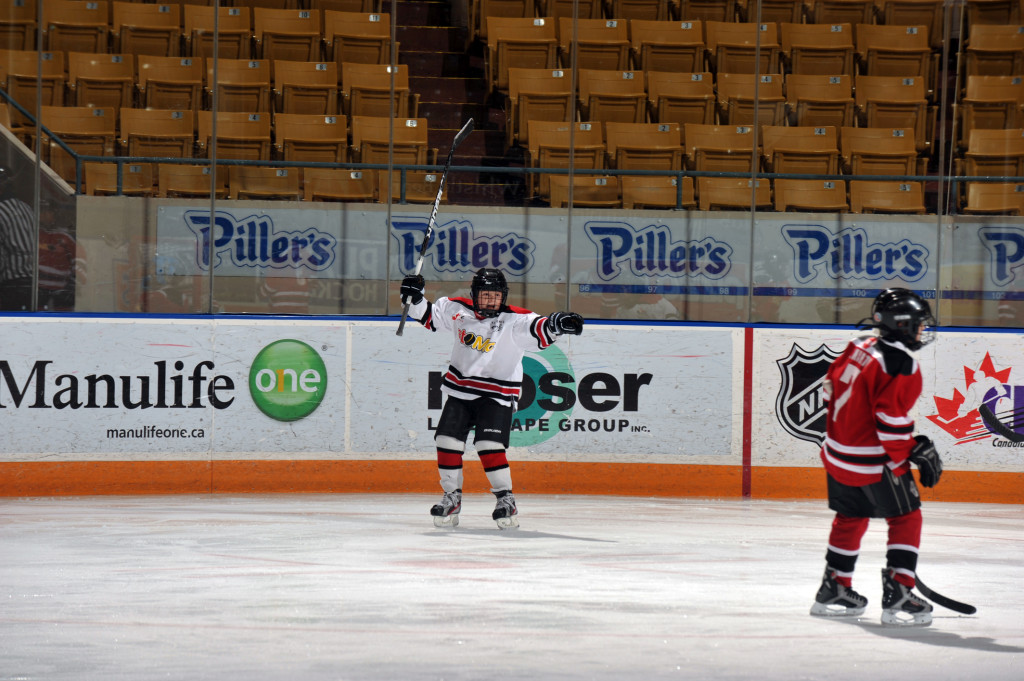 The crowd wasn’t quite as big. The players were a little shorter. But the excitement level at the Kitchener Memorial Auditorium was high!

Fourteen Major Atom House League teams from around Waterloo Region arrived at the rink ready to take the ice for the second annual Hockey Day in Rangers Nation – an event that gives them the opportunity to play like their favourite players for a day. After dragging in bags that were as big as the players (and some cases bigger!), each team settled in their own dressing room and everyone found their names on their own stall, just like the pros.

After each game, the tunnels were filled with the red toques that the kids found waiting for them in their event gift bag. It seemed the only way to tell everyone apart was to check the nameplate from their lockers, which players excitedly stuck to their foreheads before heading to the post-game meal. Platefuls of pancakes and bacon were devoured by the dozens as they recounted every moment, from the pre-game introductions by 570 News Rangers colour commentator Mike Farwell to the anthems, and from the goals to the penalty announcements.

Many commented that it was ‘really cool’ to see themselves on the centre ice video board. For the Waterloo Wolverines’ girls’ squad, the best part was the chance to skate the big ice at The Aud.

“It made me feel so special”, one exclaimed loudly as her teammates cheered in agreement.

The goalies all seemed impressed with the quality of the music played during stoppages: there were a lot of dance moves being busted out in the crease, getting laughs from teammates, parents and volunteers.
President of the Board of Directors Craig Campbell was pleased by the continued success of the event. There has been enough interest from teams that the participants are selected by random lottery and the response from the players and families has been very positive.
“I think it was evident before the first Hockey Day was even over that we had to do it again this year: the success was there on the faces of the kids and their excitement levels showed how much the experience meant to them.”
One coach noted that the experienced instilled a confidence and excitement in his players that he was hoping to carry through to the following weekend’s tournament, adding that for many, it was the biggest moment of their young career.

“For the house league players it’s a chance to come an play on the big ice in front of all the spectators and have a wonderful time,” he said with a grin. “For a 7:30 game this morning, they were more ready than I’ve ever seen them.”

That group of onlookers included Rangers’ rearguard Cody Sol, who popped his head between the benches during one early morning match-up. The 6-foot-6 veteran is pretty hard to miss in a group of ten-year-olds, but the players were so focused on the game, they failed to notice he was there! Sol doesn’t remember being as small as some of the day’s participants – “I think I was born over two feet tall” he chuckled – but he did enjoy watching the players following in his sizeable footsteps.

“This organization does so much for the community and this is a great event. It was so much fun to watch, because those kids looked like they were having a really great time out there.”

If you wanted to know who won and who lost, you’d have to check the score sheets and compare it to the team jackets, because you wouldn’t find it on the faces of the players. The name of the game was fun and there was more than enough to go around.

Just ask Casey Hicknell, got two in the penalty box for slashing in the second contest of the day. There was no anger at the call, no disappointment to be off the ice – just a huge smile when he heard his name over The Aud loudspeakers. As he sat beaming in the box, he noticed a bottle of Gatorade and towel waiting and he was floored to learn they were for his team. Asked if he was having fun, he nodded, but before he could speak, his teammates broke out short-handed and scored, leaving Casey in the box, tapping his stick on the bench in approval and looking up at the video board, checking out his squad on the big screen for the first time.

Thank you to all of the players, parents and volunteers that made the second Annual Hockey Day in Rangers Nation a huge success. We hope you had as much fun as we did, and we look forward to meeting a new generation of hockey fanatics at next year’s event!