Kadri Making an Impact in Toronto 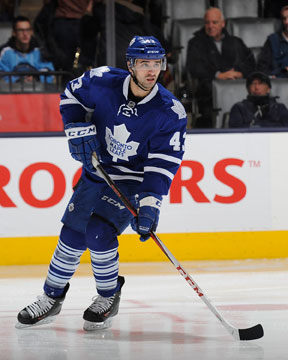 When the Toronto Maple Leafs take the ice tonight at the TD Gardens in Boston, Rangers fans will spot a familiar face in blue and white. Forward Nazem Kadri spent two seasons at The Aud, including the 2007-08 OHL Championship year before moving on to the London Knights and then to the professional ranks. Selected in the first round of the 2009 NHL Draft by Toronto, Kadri bounced between the Leafs and their American Hockey League affiliate, the Toronto Marlies, for two seasons before finding a permanent home in the NHL in 2012-13. And so far, the reviews of the centreman and his play have been good.

Kadri recorded 44 points in 48 games with the Buds in the regular season, trailing only star winger Phil Kessel. And late in the season, as the Leafs barrelled towards the playoffs, the two offensively talented forwards were given the opportunity to play together, as the former Rangers standout earned a spot on the club’s top line.

With Kadri helping to propel the offense and former Rangers captain Mark Fraser providing grit on the back end, the Leafs earned their first playoff berth in nearly a decade in 2013 and were pitted against the Bruins in the opening round. And while the London, ON native has plenty of big game experience, including an appearance with Team Canada at the World Junior Championships in 2010, the first game of the series marked Kadri’s first foray into the NHL postseason. With almost 100 games under his belt with the Leafs, he told the Toronto Sun there was still plenty to learn about spring hockey.

“[You see] how hard it is to generate chances, and if chances do come, bear down on your stick and be ready to bury them,” he explained. But despite finishing second on the team with 18 goals in the regular season, he has yet to find the back of the net in the playoffs.  Kadri knows that expectations are high in Toronto, which is suffering through a Stanley Cup drought that dates back to 1967, and he’s learning to adjust to the intense spotlight.

“It’s the same game, the same concept, but everything’s just so much more at stake, so you have to pay attention on every single shift, every single opportunity you have with the puck you have to be smart with it,” he explained to the National Post.

Kadri went on record early in the series as confident in the Leafs chances, telling the media that the Boston series was ‘very, very winnable’. Tonight, he’ll try to get the puck in the net and help Toronto preserve their playoff hopes for at least one more game. The Leafs are on the ropes headed into Game 5, down three games to one and without the services of Fraser, absent with an injury sustained on Wednesday.

Regardless of the result of this season, Nazem Kadri has proven that his success in the junior ranks was no fluke. From OHL Champion to the AHL Calder Cup Finals and now the National Hockey League, the confident youngster with the scoring touch has put himself on the hockey map.