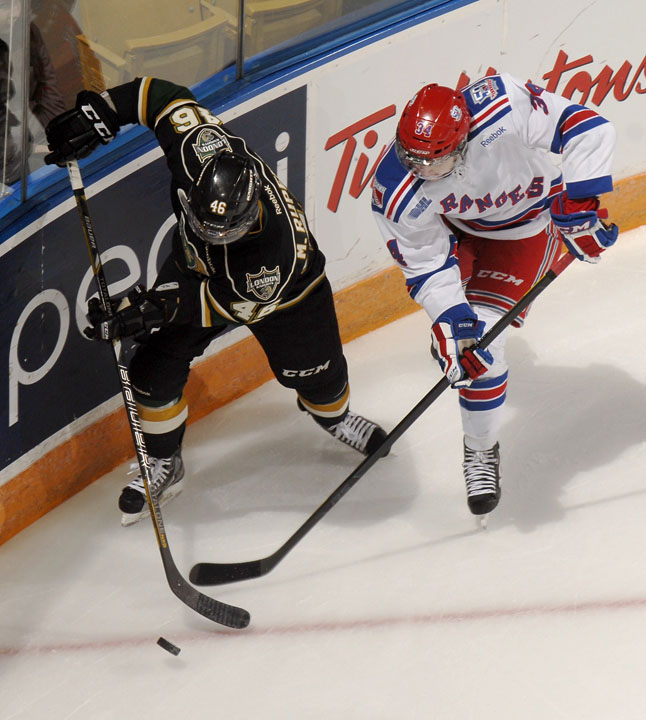 The Kitchener Rangers fell 6-2 on the road to the London Knights on Thursday night. Justin Bailey and Mike Davies each scored for the Rangers in the loss.

Teams skated through a scoreless first period. Matthew Greenfield stopped all 14 shots he faced, while the Rangers fired 18 at London starter Anthony Stolarz.

Kitchener broke the deadlock early in the middle frame, with sophomore Justin Bailey recording his 18th of the year to give his team a 1-0 lead. Curtis Meighan fed the puck to the Buffalo Sabres pick in front of the net and his initial shot on goal was blocked by Stolarz, but Bailey jumped on his own rebound, popping it over the netminder’s right pad. Mason Kohn also picked up an assist on the goal, scored less than a minute into the second period.

The Knights took full advantage of a double minor penalty assessed to the Rangers, scoring twice on the four-minute advantage. Veteran Brett Welychka put London on the board, beating Greenfield five hole with his 13th of the season. Defenceman Alex Basso and new Knights forward Gemel Smith were credited with the helpers.

London added a second goal on the latter half of the power play, with Max Domi moving a pass across the front of the Kitchener net for Ryan Rupert. The Toronto Maple Leafs lifted a shot high over the blocker of Greenfield to record his 14th of the year with a secondary assist from Nikita Zadarov.

The Rangers tied up the score at 2-2 midway through the frame, breaking into the Knights zone on a 3-on-2 odd man rush. Scott Teskey’s shot was turned aside by Stolarz, but he could not control the rebound, allowing rookie Mike Davies to chip in the rebound for his fourth of the season.

Just over three minutes later, Chris Tierney put London back in front, tracking a rebound in the blue paint behind Greenfield and tapping it in. Rupert and Zach Bell picked up assists on the fourth-year centre’s 25th of the year.

A short-handed marker by Josh Anderson extended the Knights’ lead to 4-2 with less than five minutes to play in the middle frame. The third-year winger forced a turnover at the Kitchener blueline, racing the length of the ice and pushing the puck between the pads of Greenfield for his 17th goal of the season.

The Knights continued to lead shots on goal with a 24-21 advantage in the second period.

London added to its lead early in the third, jumping ahead 5-2. Zadorov’s shot was blocked by Greenfield, but the rebound bounced off his shoulder and on to the stick of Matt Rupert, who fired a backhand shot into the open net for his 18th of the season.

Tierney’s second of the game pushed the Knights to a four goal advantage near the halfway point of the period. The San Jose Sharks prospect emerged from behind the net, collecting Matt Rupert’s pass beside the goal post and lifting a shot just under crossbar. The goal tied him for the Knights’ team lead with 26. Ryan Rupert picked up his second point of the night with an assist on the play.

London out-shot Kitchener 10-6 in the final frame, finishing with a 52-41 overall advantage. Greenfield made 46 saves for the Rangers in the loss and was named as the contest’s third star.

The Rangers return to the Kitchener Memorial Auditorium on Friday, January 17 to host the Guelph Storm at 7:30pm. Tickets to Rangers home games are available by phone at 519-578-1570 or 1-800-265-8977, via the internet at www.centre-square.com or in person at the Centre In the Square Box Office or the Kitchener Auditorium Box Office.