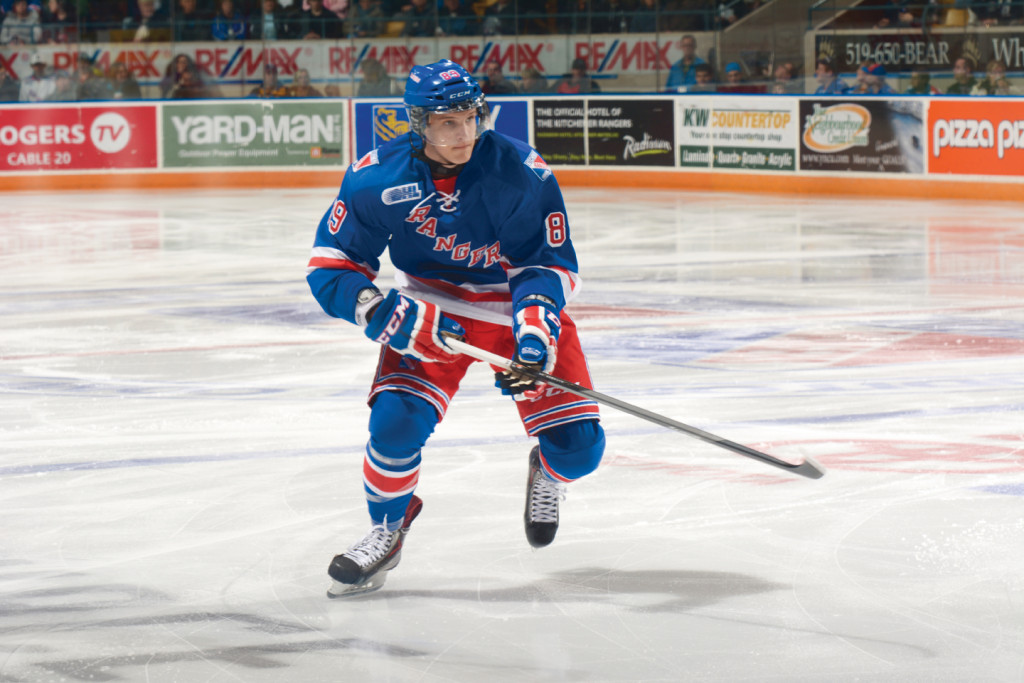 The Storm opened the scoring midway through the first period, converting a turnover into a short-handed tally. Brock McGinn’s first shot was blocked by defenceman Dmitrii Sergeev, but the Carolina Hurricanes prospect recovered the puck and lifted a shot high over the right shoulder of goaltender Matthew Greenfield. His 40th of the season was assisted by Jason Dickinson.

The Rangers responded just over two minutes later, tying the score at one goal apiece. Waterloo native Jimmy Soper snapped a wrist shot past the blocker of Matt Mancina to record his first career Ontario Hockey League goal. Sergeev and Scott Teskey were credited with the helpers.

A pair of quick goals put the Storm back in front with just over four minutes to play. Dickinson picked up his second assist of the night at 14:45, sliding a pass through the crease to veteran Scott Kosmachuk who tapped the puck by Greenfield, tying him for the team lead with 44 goals this season.

Less than a minute later, Guelph jumped ahead 3-1, off the stick of Kerby Rychel. Captain Matt Finn led the rush into the Rangers’ zone, dropping a pass for the former Windsor Spitfires forward. Rychel fired a quick shot past Greenfield for his 32nd of the campaign, with a secondary assist from Robby Fabbri.

Fabbri potted his 44th of the year on a late period power play, sending the Storm into the first intermission with a three-goal lead. The draft-eligible sophomore lifted a shot over the blocker-side shoulder of Greenfield, with help from Rychel and Nick Ebert.

The Storm out-shot the Rangers 19-10 in the opening 20 minutes of play.

Dominik Kubalik cut into the Storm lead early in the second period, snapping a shot high over the glove of Mancina, bringing his season total to 16 goals. Matia Marcantuoni earned the lone assist on the play.

Two power play goals late in the period put Guelph up 6-2 after 40 minutes of play. Kosmachuk set up the first tally, moving the puck to McGinn in the slot. He launched a shot past Greenfield, recording his second of the game. Mancina also picked up an assist on the play.

Dickinson earned his third point of the night 1:25 seconds later, burying a shot to put the Storm ahead by four goals. Rychel and Finn earned the assist on the power play marker, Dickinson’s 25th goal of the season.

Guelph continued to lead shots on goal 18-5 in the second period.

The teams traded goals midway through the third. The Storm struck first and extended their lead as McGinn completed the hat trick. Dickinson moved the puck from the boards to the veteran forward in front of the net, and he shoveled by Greenfield, putting Guelph up 7-2. Kosmachuk earned his third point of the game with a helper on the play.

The Rangers responded quickly, scoring just 13 seconds later.  Marcantuoni collected the puck behind the Guelph net, and connected a centring pass with Kubalik. The Czech-born forward wired a shot past Mancina to pick up his second goal of the night.

The Storm out-shot Kitchener 16-7 in the final period of play, finishing with a 53-22 overall advantage.

With the victory, Guelph sweeps the eight-game season series with the Rangers.

The Rangers hit the road on Thursday, March 13 for a 7:00pm meeting with the Sarnia Sting. The team returns home to welcome the Windsor Spitfires for Fan Appreciation Day on Friday, March 14 at 7:30pm. Tickets to Rangers home games are available by phone at 519-578-1570 or 1-800-265-8977, via the internet at www.centre-square.com or in person at the Centre In the Square Box Office or the Kitchener Auditorium Box Office.