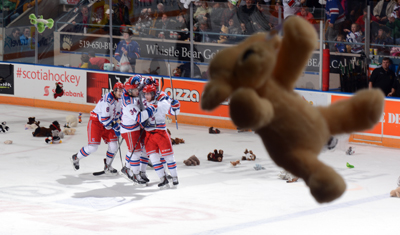 The Rangers opened the scoring at the 12:28 mark of the first period, sending a record 9,465 stuffed toys soaring to the ice. Rookie Nick Magyar picked up the celebratory tally with a sharp angle shot that rattled off netminder Anthony Stolarz and into the net, sending the bears cascading to the ice. The Mentor, OH native has points in four straight games and sits in third in OHL rookie scoring with 20 points. Brent Pedersen was credited with the lone assist on the play, his third point in as many games.

Kitchener starter Matthew Greenfield stopped all 13 shots he faced in the opening frame. The Rangers recorded 10 shots through 20 minutes.

Vancouver Canucks prospect Bo Horvat pulled the Knights even on an early second period power play opportunity, collecting a pass from Ryan Rupert beside the net and sliding by the left pad of Greenfield. The team scoring leader’s 14th of the season was also assisted by Max Domi.

Less than four minutes later, Horvat scored his second of the game to put London ahead 2-1. The third-year winger pushed past the Rangers blueliners and backhanded a shot behind Greenfield, with assists from Domi and Zach Bell.

Late in the frame, Radek Faksa’s 13th goal of the season leveled the score at two goals apiece. The Czech-born pivot deflected Logan Schmidt’s shot over the pad of Stolarz and the puck slowly tricked over the goal line. Faksa leads the team with 24 points this season, and departs later this week to compete in the World Junior Hockey Championship.

The Rangers dominated shots on goal by a 17-9 margin in the second period.

London took a one goal lead early in the third period when a puck bounced off the glass behind the Rangers net and onto the stick of Chris Tierney. His 16th of the year was assisted by Aiden Jamieson and Rupert.

Scott Teskey’s first goal as a Ranger pulled the team even with 8:28 left to play. With the clubs playing 4-on-4, the former Mississauga Steelheads winger pounced on a rebound and banged it past Stolarz. Veteran centre Curtis Meighan was credited with the lone helper on Teskey’s first of the year.

Fourth year rearguard Max Iafrate put Kitchener ahead 4-3 with a power play marker late in the period. The Michigan native picked up the puck in the Rangers zone, rushing end-to-end and ricocheting a shot off the goal post and into the net. The unassisted tally was Iafrate’s third of the season; he leads all Kitchener defenceman in scoring with 14 points this season.

Two quick goals from the Knights pushed them back in front in the final minutes. Domi’s high shot beat Greenfield high glove-side with 1:47 to play, bringing his goal total to 12 on the year. Rupert earned his third point of the game with an assist on the play.

Rupert added a goal 33 seconds later to put London up 5-4 with 1:14 remaining in the game. The Toronto Maple Leafs prospect drove hard to the net, picking up a cross-ice pass from Dakota Mermis and hammering it by the netminder for his 9th of the season. Tierney also assisted on the goal, his second point of the night.

Domi potted an empty net goal with 15 seconds left on the clock to seal a 6-4 Knights win. Brady Austin picked up a helper on the third year forward’s second of the game.

London out-shot the Rangers 13-11 in the final frame, but Kitchener finished with a 38-35 overall advantage on the shot clock.

The Rangers return to the Kitchener Memorial Auditorium on Friday, December 13 to host the Owen Sound Attack at 7:30pm. Tickets to Rangers home games are available by phone at 519-578-1570 or 1-800-265-8977, via the internet at www.centre-square.com or in person at the Centre In the Square Box Office or the Kitchener Auditorium Box Office.