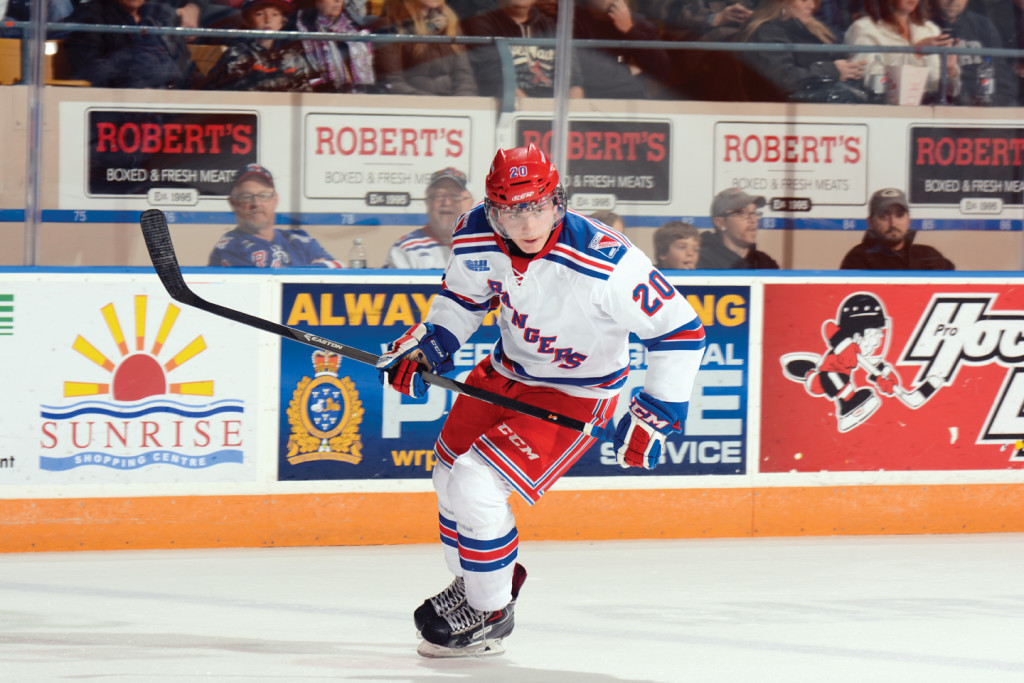 Nick Magyar scored a pair of goals for the Kitchener Rangers in a 5-2 loss to the Owen Sound Attack on Saturday night.

The Rangers took an early lead, opening the scoring 65 seconds into the first period. Owen Sound netminder Michael McNiven mishandled the puck as it bounced off the end board, and it landed on the stick of a charging Nick Magyar. The Colorado Avalanche prospect chipped it into an open net to earn his seventh of the year, with assists from Curtis Meighan and Frank Hora.

Less than two minutes later, captain Zach Nastasiuk pulled the Attack even, picking up a cross ice pass from Chris Bigras and snapping it past Rangers starter Matthew Greenfield. Import forward Petrus Palmu also picked up a helper on the goal, Nastasiuk’s 15th of the year and second in as many games.

Two quick goals on a two-man power play lifted Owen Sound to a 3-1 lead late in the frame. With his team on a 5-on-3 advantage, Bigras lifted a long, high shot into the top corner of the net for his tenth of the season. Rearguard Thomas Schemitsch and team scoring leader Kyle Platzer assisted on the play.

Seventeen seconds later, Bigras and Platzer connected again on the power play. The Waterloo native picked up the pass in the slot and fired a quick shot past Greenfield for his second goal of the weekend. Nastasiuk also earned an assist on the late period goal, his second point of the game.

Kitchener led shots on goal 9-8 after 20 minutes of play. The Rangers elected to make a goaltending change during the intermission, sending Dawson Carty to the crease for the second period.

Platzer scored his second of the game late in the middle frame, extending Owen Sound’s lead to 4-1. The veteran pivot collected the pass from Nastasiuk and snuck it under the elbow of Carty. Schemitsch earned his second helper of the game on the play.

Kitchener led shots on goal 12-8 in the second period.

Magyar scored his second of the game on the power play with 2:16 left to play, cutting the Rangers’ deficit to two goals. Adam Mascherin set up the sophomore winger, finding him open at the side of the net, and the Mentor, OH native buried the puck in the open side of the net.

Platzer completed the hat trick in the dying seconds of the game, firing into an empty Kitchener net. Nastasiuk earned the lone assist on the play, giving both Owen Sound forwards four points on the night.

The Attack out-shot the Rangers 10-8 in the third, though Kitchener did finish with a 29-26 advantage on the shot clock.

The next Rangers home game is our 20th Annual Teddy Bear Toss on Tuesday, December 9 when we host the Erie Otters at 7:00pm. Tickets to all Kitchener Rangers home games are now available by phone at 519-578-1570 or 1-800-265-8977, via the internet at www.centre-square.com or in person at the Centre In the Square Box Office or the Kitchener Auditorium Box Office.