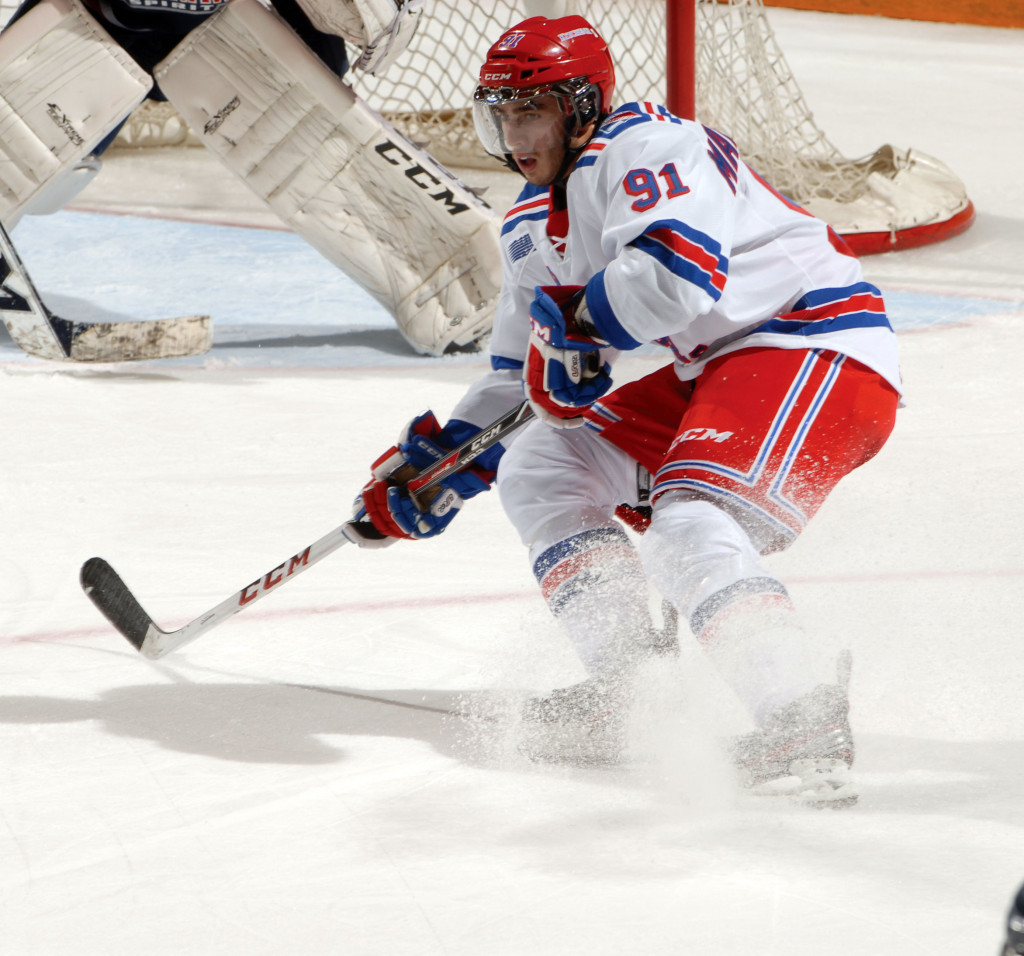 Matia Marcantuoni scored his sixth of the season Friday night, helping the Rangers to a 2-1 shootout victory over the Owen Sound Attack. Radek Faksa and Darby Llewellyn tallied goals in the shootout, and goaltender Jordan DeKort made 20 saves and stopped two Attack shooters to earn his first win with the Rangers.

The Attack jumped first with the man advantage, opening the scoring at the 6:37 mark of the first period. Brett Hargrave’s power play marker was his first goal since joining the Attack in a trade with the Sarnia Sting late last month. Kurtis Gabriel and Brayden Rose earned assists on the former first-round pick’s second of the year.

The Rangers responded before the end of the frame, as fourth year centre Matia Marcantuoni buried his sixth of the year. Brent Pedersen set up the play, finding the Pittsburgh Penguins prospect at front of the net, and Marcantuoni dove forward, stabbing the puck past netminder Jack Flinn. Defenceman Evan McEneny also earned an assist on the play at 16:42.

Kitchener led shots on goal 7-6 through the opening 20 minutes.

The teams skated through a scoreless middle frame and headed into the dressing room knotted at 1-1. The Attack out-shot the Rangers 7-6 in the period.

Neither team could break the deadlock in the third, sending the contest into overtime. The Rangers finished the period with an 11-4 advantage on the shot clock and led shots on goal 24-17 after regulation.

The Attack out-shot the Rangers 4-3 in a scoreless extra frame. Kitchener starter Jordan DeKort stopped 20 of 21 shots through 65 minutes of play.

Radek Faksa and Darby Llewellyn each scored in the shootout, and DeKort stopped a pair of shooters to secure a 2-1 Rangers win.

With the victory, Kitchener evens the eight game season series at one win apiece.

The Rangers return to the Kitchener Memorial Auditorium on Sunday, November 17 for a 2:00 pm meeting with the Sault Ste. Marie Greyhounds. Tickets to Rangers home games are available by phone at 519-578-1570 or 1-800-265-8977, via the internet at www.centre-square.com or in person at the Centre In the Square Box Office or the Kitchener Auditorium Box Office.