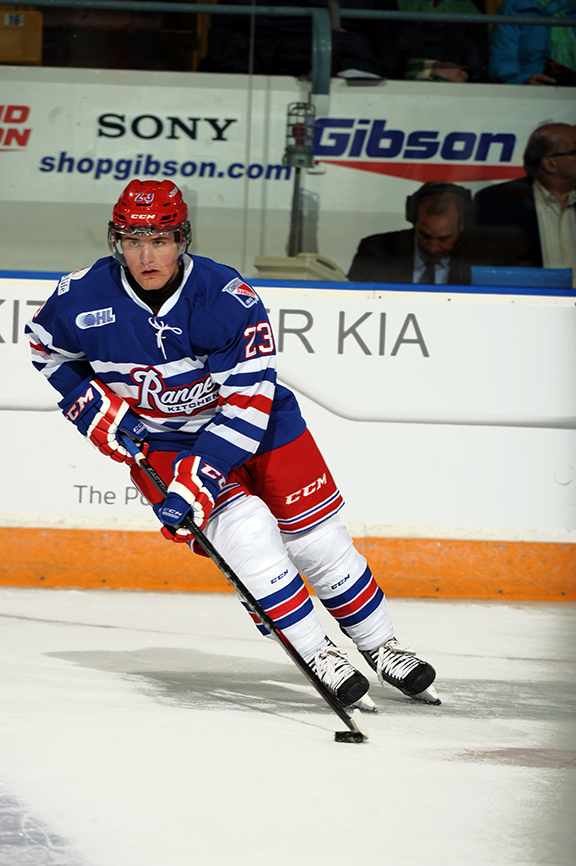 Adam Mascherin scored and added a pair of assists to lead the Rangers to a 5-1 win over the Sault Ste. Marie Greyhounds on Friday night. Curtis Meighan, Justin Bailey, Mike Davies and Gustaf Franzen also scored for the Rangers in the final game before the holiday break.

Curtis Meighan opened the scoring late in the first period, putting the Rangers ahead 1-0. Rookie Adam Mascherin set up the play, digging the puck out from behind the Greyhounds net and finding the overage centre in the faceoff circle. The overage pivot leaned into a shot that bounced past Soo netminder Joesph Raaymakers, netting him his second goal of the season. Thomas Welsh also picked up an assist on the lone tally of the first frame; the newest Rangers defenceman has points in back to back contests.

The Greyhounds led shots on goal 13-11 after the opening 20 minutes of play.

Kitchener extended its lead to 2-0 early in the second period. Mascherin fired a long shot from just inside the blueline that soared past Raaymaker, bringing his season total to six. The Rangers first round pick in 2014, Macherin’s goal was his second in as many contests.

Team scoring leader Justin Bailey pushed the Rangers ahead by three goals at the 7:40 mark of the middle frame. With the teams playing 4-on-4, the Buffalo Sabres intercepted the puck inside the Greyhounds blueline, and slid a shot between Raaymakers’ pads. The unassisted marker was Bailey’s 18th of the season.

Blake Speers put Sault Ste. Marie on the board just past the midway point, capitalizing on the power play. The sophomore fired a shot through traffic that beat Rangers starter Matthew Greenfield, with assists from Gustav Bouramman and Zachary Senyshyn. A Soo native, Speers sits two goals shy of his previous career best with 17 on the year.

The Rangers responded with a power play tally of their own with less than four minutes to play, restoring their three goal advantage. Sophomore Mike Davies launched a quick, low shot past Raaymakers for his eighth of the season, a new career high for the former first round pick. Import rearguard Dmitrii Sergeev and centre Ryan MacInnis earned the helpers on the play.

Kitchener outshot the Greyhounds 14-12 in the middle frame.

Swedish forward Gustaf Franzen scored his second goal in as many games to seal a 5-1 Rangers victory. With the Rangers on the power play, Mascherin moved the puck across the front of the Greyhounds net, finding his fellow freshman open to the right of Raaymakers. Franzen’s shot ricocheted over the goal line, giving him eight goals this season. The second assist was credited to captain Liam Maaskant.

The Rangers led shots on goal 9-4 in the third, and finished with a 34-29 overall advantage. Greenfield made 28 saves for Kitchener and was named the contest’s second star.

The next Rangers home game is Sunday, December 28 when we host the Erie Otters at 2:00pm. Tickets to all Kitchener Rangers home games are now available by phone at 519-578-1570 or 1-800-265-8977, via the internet at www.centre-square.com or in person at the Centre In the Square Box Office or the Kitchener Auditorium Box Office.