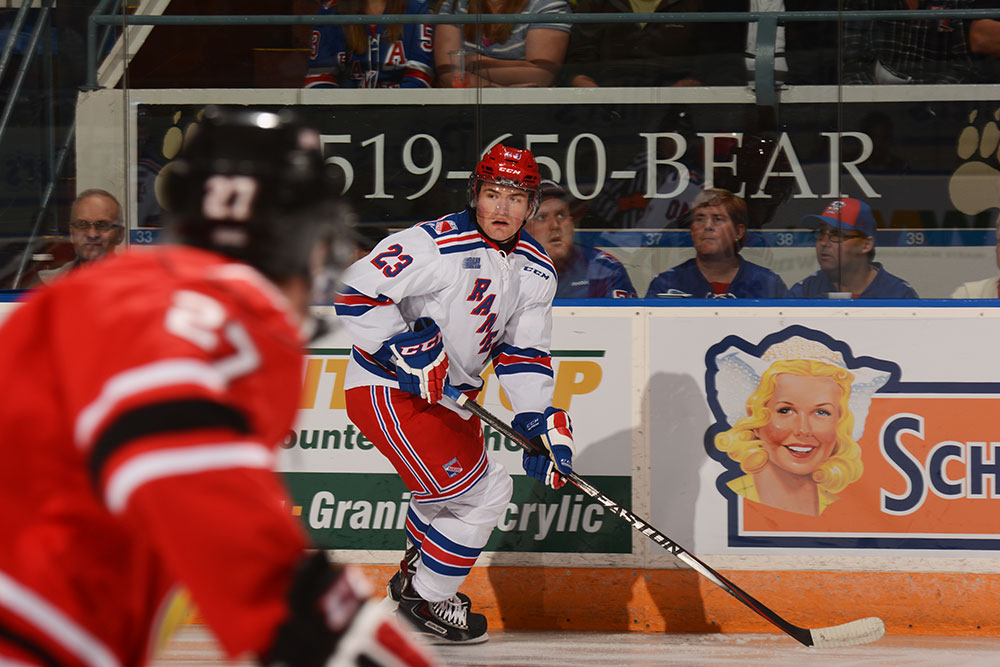 First-round pick Adam Mascherin scored the first two goals of his Ontario Hockey League career in the Kitchener Rangers’ 4-3 loss to the Oshawa Generals on Sunday night. Ryan MacInnis also scored for the Rangers, his first goal of the season and fifth point in three games.

The Rangers struck first, when Justin Bailey and Ryan MacInnis took off on the odd-man rush near the 11 minute mark of the first period. MacInnis collected a pass and carried the puck across the front of the net, shovelling a backhand shot past the left skate of Ken Appleby. The Arizona Coyotes prospect’s goal was his first of the season and his fifth point in three games. Bailey’s assist puts him in the team lead with six points in three games this season.

The Generals took advantage of a power play opportunity early in the middle frame to level the score at 1-1. Captain Cole Cassels scored his second of the season, jumping on a rebound in front of the Rangers’ net and lifting a shot over starter Matthew Greenfield. The power play goal was assisted by Tobias Lindberg and Michael Dal Colle.

Kitchener re-established its one-goal lead near the midway point of the game, scoring with the man-advantage. Russian rearguard Dmitrii Sergeev fired a shot on goal that was turned aside by Appelby, but Brandon Robinson corralled the puck and moved it quickly to Adam Mascherin in the slot. The second overall pick in the 2014 Priority Selection snapped it past the netminder to record his first career OHL goal and put the Rangers ahead 2-1.

The rookie added another before the end of the second period, scoring back-to-back power play goals to put the Rangers up by two goals.  Curtis Meighan set up the play with a pass from the boards, and Mascherin leaned into the shot, firing from one knee and sending the puck soaring over the shoulder of Appleby. Sophomore Nick Magyar also earned a helper on the play at 16:54.

Kitchener continued to lead shots on goal in the second by a 16-5 margin.

Chris Carlisle pulled the Generals within one, converting on a penalty shot awarded early in the third period. The veteran defenceman beat Greenfield blocker side to record his second goal of the season.

Oshawa pulled even just over a minute later, jumping on the power play to settle the score at 3-3. Michael Dal Colle launched a heavy shot through Greenfield, recording his first of the season after being returned to the club by the New York Islanders for Sunday’s contest. Lindberg and Cassels each picked up their second point of the night with assists on the play.

Carlisle’s second of the game gave the Generals their first lead of the night with less than a minute to play. The overage rearguard carried the puck down the left wing and fired a shot that passed between the pads of Greenfield. His third of the year was assisted by Cassels and Hunter Smith.

The Rangers led shots on goal 15-6 in the final frame, and finished with a 42-21 overall advantage on the shot clock.

The Rangers return to the Kitchener Memorial Auditorium on Friday, October 10 to host the Erie Otters at 7:30pm. Tickets to all Kitchener Rangers home games are now available by phone at 519-578-1570 or 1-800-265-8977, via the internet at www.centre-square.com or in person at the Centre In the Square Box Office or the Kitchener Auditorium Box Office.