This season, Sun Life Financial and the Kitchener Rangers are again working with artist David Arrigo to bring the Kids in Gear program to life through the 5th Annual Kids In Gear Mask Design contest for children 14 years old and under, with David painting the winning design. David is a renowned artist known for his artwork across the sports world including helmets, motor vehicles, murals, etc.). THE CONTEST IS NOW CLOSED! 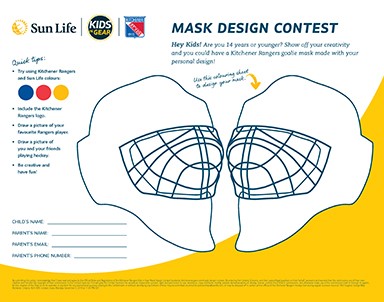 There will be one (1) grand prize (the “Prize”) available to be won consisting of:

The approximate retail value of the Grand Prize is $2,500 CAD.

For the Grand Prize selection, on Friday, December 6, 2019 at the Sun Life Financial office located at 1 York St., Toronto Ontario, M5J 0B6 at approximately 12:00 pm (EST), one (1) Entrant will be selected by representatives of the Contest Sponsor and the Kitchener Rangers (the “Judging Panel”), among all Entries received during the Contest Period by the Contest Sponsor as the potential Prize winner.

The potential Prize winner will be contacted by the Contest Sponsor or their agent or representative by telephone and/or email within two (2) days of being selected.

For complete details and draw dates, see rules and regulations below.