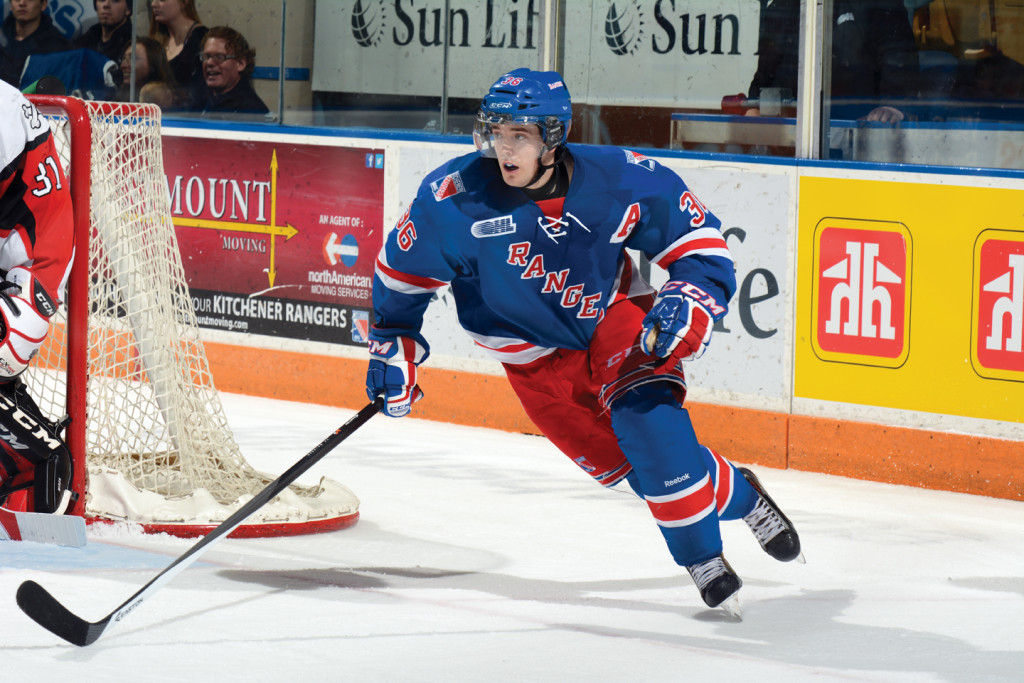 Curtis Meighan scored twice to lead the Kitchener Rangers to a 4-3 victory over the Windsor Spitfires on Thursday night. Dominik Kubalik and Matia Marcantuoni also scored in the win, the Rangers’ fifth in six games.

The Spitfires opened the scoring early in the first period, taking advantage on the power play. Slater Koekkoek fired a shot that redirected off the skate of Cristiano DiGicianto, past Rangers’ starter Jordan DeKort. DiGicianto’s 16th of the season was also assisted by former Kingston Frontenacs winger Sam Povorozniouk.

The Rangers responded on the man-advantage, tying the game at one goal apiece. Rookie rearguard Frank Hora launched a shot from the blueline that was tipped in front by veteran centre Curtis Meighan. The power play marker was his eighth of the season.

The Rangers led shots on goal 5-4 after 20 minutes.

Meighan’s second of the game lifted the Rangers to a 2-1 lead early in the second period. The Ottawa native applied pressure at the top of the crease, eventually banging a shot by Windsor starter Dalen Kuchmey. His career-best ninth of the year was assisted by import defenceman Dmitrii Sergeev, his third point in as many games.

Two quick goals put the Spitfires in the lead just past the 14 minute mark of the frame. First, Josh Ho-Sang snapped a shot off the goal post that bounced behind DeKort, knotting the score at 2-2. His 28th of the year was assisted by Ryan Foss.

Just 21 seconds later, Windsor regained the lead when Ben Johnson unleashed a slapshot through traffic in front of the net, picking up his 23rd goal of the season. Brady Vail and Foss picked up the helpers on the goal.

With less than three minutes remaining before the second intermission, Dominik Kubalik pulled the Rangers level at 3-3. The import winger picked the puck off at the blue line and raced it through the neutral zone lifting a backhand shot over Kuchmey for his 15th of the year. The unassisted goal was the Czech’s first since returning to the lineup from injury.

The Spitfires led shots on goal 13-12 in the middle frame.

Matia Marcantuoni put the Rangers ahead with 14 minutes to play, jumping on a turnover at the Windsor blueline and sliding a shot between the pads of Kuchmey. The unassisted tally was the Pittsburgh Penguins prospect’s 13th of the season.

The Spitfires out-shot Kitchener 15-7 in the final frame, but DeKort made 29 saves to earn the win over this former team.

With the victory, the Rangers move within three points of Plymouth Whalers for the final playoff spot in the Western Conference.

The Rangers return home to welcome the Owen Sound Attack to the Kitchener Memorial Auditorium on Friday, February 21 at 2:00pm. Tickets to Rangers home games are available by phone at 519-578-1570 or 1-800-265-8977, via the internet at www.centre-square.com or in person at the Centre In the Square Box Office or the Kitchener Auditorium Box Office.