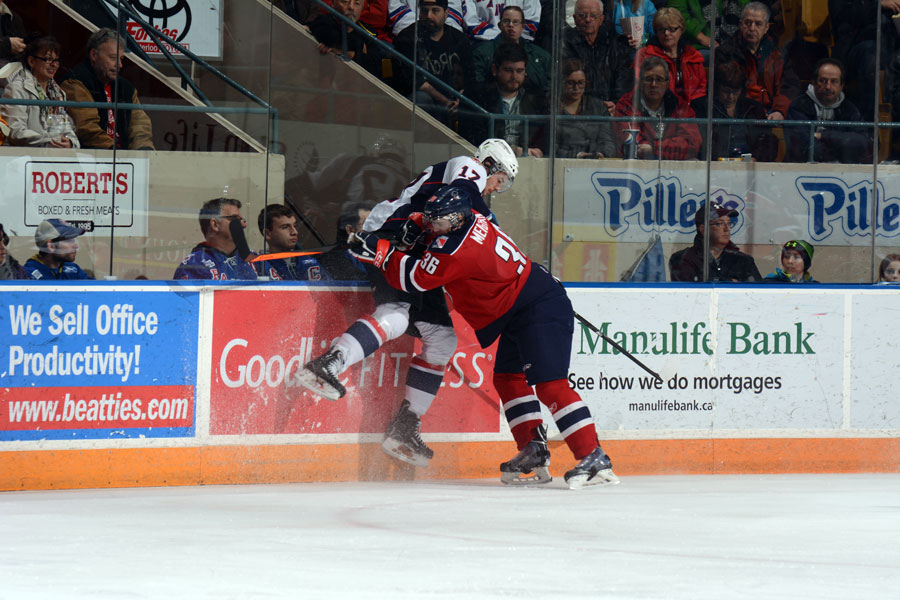 Curtis Meighan and Dmitrii Sergeev scored for the Kitchener Rangers in a 3-2 shootout loss to the Windsor Spitfires on Friday night.

The Rangers opened the scoring on the power play early in the first period. Windsor netminder Alex Fotinos made the initial save on Matia Marcantuoni, but veteran pivot Curtis Meighan picked up the rebound in front of the net and buried it for his 11th of the season and third point in two games. Max Iafrate also picked up an assist on the play and leads all defencemen with 30 points in 2013-14.

The Rangers led shots on goal 17-10 in the opening frame.

The two teams skated through a scoreless second period, with Matthew Greenfield making nine saves for the Rangers and Fotinos responding with 15 saves in the Windsor net.

Kitchener took a 2-0 lead seven minutes into the final frame, striking again with the man advantage. Logan Schmidt calmed the puck near the blueline and moved it to fellow blueliner Dmitrii Sergeev, who unleashed a slap shot that soared by Fotinos. Mason Kohn picked up his second point in as many nights with an assist on the play. Schmidt’s helper was his fifth in two games.

Windsor’s special teams pulled them even before the end of the frame. Brady Vail picked up a pass in stride behind the Rangers defenders, finding himself on a shorthanded breakaway. He snapped a shot past Greenfield for his 32nd of the year, with assists from Adam Bateman and Fotinos.

A power play goal with less than 90 seconds to play tied the score at 2-2. Vail’s shot on net was blocked and trickled to the side of the net, where it was pushed over the line by Ben Johnson. His 27th of the season was also assisted by Steven Janes.

The Rangers led shots on goal 13-10 in the third period, finishing regulation with a 45-29 advantage on the shot clock.

Neither team scored in the overtime period, sending the Rangers to their second consecutive shootout.  Ryan Foss and Vail recorded goals for the Spitfires, lifting them to a 3-2 win.