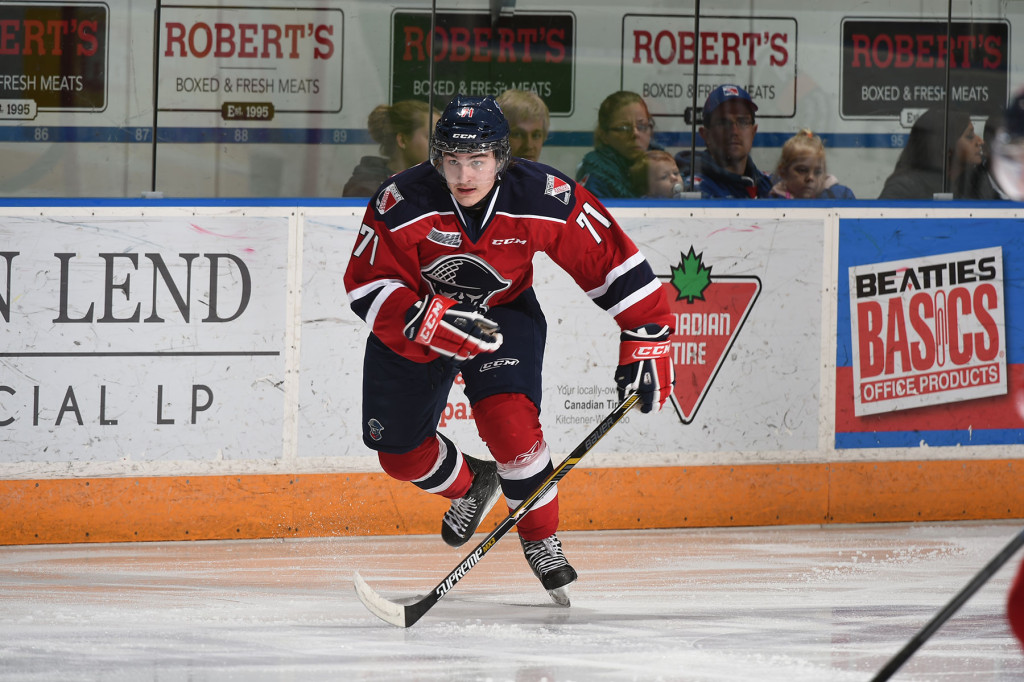 David Miller scored a pair of goals and added two helpers in the Kitchener Rangers’ 10-6 loss to the London Knights on Tuesday night. London leads the Western Conference Quarterfinal series 3-0.

Rangers captain Liam Maaskant put his club on the scoreboard first, opening the scoring four minutes into the opening frame. David Miller gained the puck off the faceoff inside the Knights blueline and moved it back to the overage rearguard, who bounced a shot past Tyler Parsons for his first of the playoffs.

London countered near the midway point of the period. Jack Hidi chipped the puck forward to Owen MacDonald from his own blueline, and the veteran pivot fired a quick shot from the slot past Rangers starter Jake Paterson. Brandon Crawley also picked up an assist on MacDonald’s first of the postseason.

The Knights capitalized on a 4-on-3 power play opportunity with less than five minutes to play in the frame to take their first lead of the night. Arizona Coyotes prospect Christian Dvorak batted the puck out of the air, over Paterson to record his first of the series. Scoring leader Mitchell Marner and rookie Victor Mete earned helpers on the marker.

The lead was short-lived: Miller pulled the Rangers level 32 seconds later with his first goal of the postseason and his second point of the game. Mason Kohn was blocked by Parsons, but Miller corralled the rebound, turned and lifted it over the netminder. Ryan MacInnis also assisted on the play, giving him points in seven of eight meetings with the Knights this year.

Nick Magyar scored his first career OHL playoff goal with 44 seconds left in the first, lifting the Rangers to a 3-2 lead after 20 minutes. The Colorado Avalanche prospect picked up the puck beside the London net, and pitched a sharp angle shot past Parsons. Miller recorded his third point of the night with an assist on the power play marker. The second helper was credited to rearguard Max Iafrate.

The Rangers out-shot the Knights 18-10 in the opening period.

Darby Llewellyn’s second goal of the series extended the Rangers’ lead to 4-2 just 28 seconds into the middle frame. Rookie Adam Mascherin’s shot was stopped by Parsons, but the puck bounced onto the stick of Llewellyn and the Ann Arbor, MI native swept a high shot into the net. Import defenceman Dmitrii Sergeev also assisted on the play.

Two quick goals from the Knights knotted the score a 4-4 before the halfway mark. Matt Rupert scored his second of the playoffs at 6:51, collecting a pass from Marner after a flurry of activity at the Rangers net and pushing it in for the tally. Mete earned his second point of the night with an assist, after lunging to keep the puck in at his own blueline.

The Rangers restored their lead with three minutes to play in the middle frame. MacInnis moved the puck to Miller, who snuck a shot past the left pad of Parsons for his second goal of the night. Maaskant earned an assist on the play, giving him two points in the game.

Rupert would add one more Knights goal before the intermission, levelling the score at five goals apiece. Bergman threaded a pass to the Toronto Maple Leafs prospect to the right of Paterson, and Rupert released a quick shot for his second of the game. Marner also picked up a helper on the goal at 18:07.

The Knights led shots on goal 16-9 in the second period.

Marner netted his sixth goal of the series early in the third period, when he carried the puck out from behind the Rangers net and buried the wraparound shot between Paterson’s pads. The goal was his fourth point of the night, assisted by Mete and Aiden Jamieson.

London extended its lead to 7-5 with less than 14 minutes to play, after captain Max Domi rattled a shot off the crossbar behind Paterson for his second of the postseason, with assists from Jamieson and Mete.

Maaskant’s second goal of the game pulled Rangers within one with 8:50 left to play in the third period, firing a hard shot from just inside the blueline that soared past Parsons. Mason Kohn was credited with the lone assist on the play.

A pair of quick goals extended London’s lead to 9-6: first Marner dug the puck out in the corner and passed it to Dvorak in front. He beat Paterson for his second of the game, scored at 12:08. A minute and a half later, it was Marner’s turn to pot his second, with assists from Aaron Berisha and Mete.

Hidi scored an empty net goal with less than a minute to play to seal a 10-6 Knights win. MacDonald was credited with the lone assist on the play.