More than just a feel-good story  this is our community at its best! 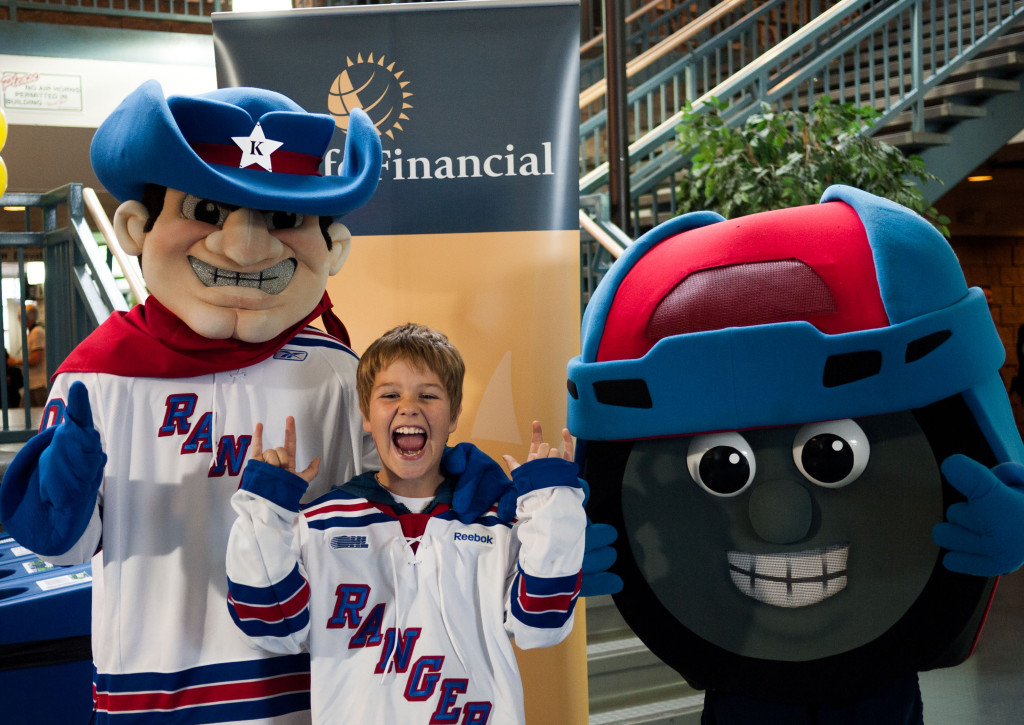 Bishop Snow’s story is a great example of the Sun Life Financial Kids In Gear program in action. It’s also a story about our community at its best, involving the Kitchener Rangers, Big Brothers, Big Sisters Waterloo Region, and United Way KW.

When we approached Bishop’s mother, Corrie-ann, to see if they were willing to share their story with us, anonymously if she liked, she said: “If I can give back by sharing our story, that’s great! It’s my way to thank and recognize everyone who helped. I’ve received support and now I’m giving back.” She also said they’d be pleased if we used their real names.

Corrie-ann is happy to let others know how great the Kids In Gear (KIG) program is and how it has helped her son, not only to play hockey but in other ways too! As for Bishop, he said he’s really proud to be a KIG kid.

About Kids In Gear

The Sun Life Financial Kids In Gear program assists with the collection and purchase of hockey equipment for youth who require support in order to play our national game. It’s about giving back to the game we all love to play. Monetary proceeds also go to Donna’s Kids, a program run by the Kitchener Minor Hockey Association.

“Both Sun Life and the Kitchener Rangers have a rich history of giving back to the community,” says Bill Ramsammy, AVP, Corporate Brand & Marketing, “and we’re really proud of our partnership with the Rangers and the Kids In Gear program.”

With the help of Sun Life’s dedicated volunteers, Kitchener Rangers fans, and Kids In Gear supporters across the region, we’re proud to have raised $20,000 and supported all 137 children in the program during the 2012-13 season. Combined, last year’s and this year’s totals are close to $40,000.

“For Sun Life, it’s important to give back to the communities where we work and live,” Bill adds. “Knowing that we helped kids like Bishop fulfill their dreams makes it even more important.”

Bishop’s KIG story started when he told his Big Brother, KC Flynn, that he always dreamed of playing hockey. KC, who has been seeing Bishop regularly since he was nine, is a hockey fan, a Rangers fan, and has even billeted Rangers from out of town. KC knew about the Sun Life Financial Kids In Gear program and so for 10 year-old Bishop, the opportunity to play hockey for the first time was truly a dream come true!   KC told us “I can always tell which player is Bishop on the ice because he never stops smiling!”

Corrie-ann told us that her son was so excited to get going last year, he got the equipment in September and spent a month trying it on and off, even though they didn’t play until October. Bishop is using the equipment from last year, unless he grows out of it before the season ends.

Last year, Bishop played hockey for the Gray Grizzlies and is excited about playing in a new pee wee league this year, with 11 and 12 year-olds. He wants to be a professional hockey player and play forward, but he’s been told he’s better at defence. Bishop accepted his role, saying “It’s good for now, just to get the exercise.”

Corrie-ann is a single mother, a professional, taking university courses while she works full time. Her income is delegated to supporting her three children, including a daughter who is in college. Corrie-ann’s income makes her ineligible for many community services, so things like hockey fees and equipment just didn’t factor into her budget.

When we asked Bishop to tell us how KIG helped him, he said: “It helped me get the gear I wanted and needed through Play It Again Sports. I had a list of everything I needed and they suited me up. I outgrew my helmet during the season and was able to take it back and get a bigger one.” Corrie-ann added that they filled out the online request, paid what they could, and then KIG subsidized the rest.

Bishop is a big fan of the game – and a big Kitchener Rangers fan. He was really excited when United Way KW gave him tickets to the Skate with the Rangers event last year and asked him to be the Kids In Gear representative at this year’s event on October 19.  “It was really, fun” he said. “It was cool to get autographs. They were so tall! I wore a Rangers jersey that I got for my birthday.” When asked, Bishop said so far, his favourite players are Ben Fanelli and Ryan Murphy.

Watching the Rangers inspires Bishop to be a better player. “When I watch the defence, it gives me pointers and helps me learn some strategies.”

What does Bishop like about hockey? “I love that you get to try your best, test yourself, and have fun” he answered. His mother told us the experience has been a real confidence booster as well. “Playing hockey on a team has helped raise his confidence in hockey, at school, and in life. It’s a great life-learning opportunity. As well as the physical outlet, he gets to work as a member of the team, work towards his own goals, and he’s made friends of all members of the team. It has really helped his self-confidence.” Corrie-ann has seen such a change in him since he started playing hockey. Bishop stands up for himself now. “Hockey is a great outlet for success!”

Corrie-ann said last year was a great year of hockey for her son. “He learned a lot about different positions on the team and put everything together that he learned. Now when he watches it live on television, he really knows what it’s all about.”

KIG has made all the difference for Bishop. Not only did he play hockey for the first time last season, he also won the tournament! Bishop’s team came fourth in their league in their age category, but in the end, they won the annual tournament for their age group. Bishop was thrilled that Walter Gretzky, (yes, that Gretzky), pinned the medal on him and his teammates.

And the question we’re all itching to ask: What number is on Bishop’s jersey? “It’s number 9” Bishop responds, “for Rocket Richard.” Now, that’s a real hockey fan!