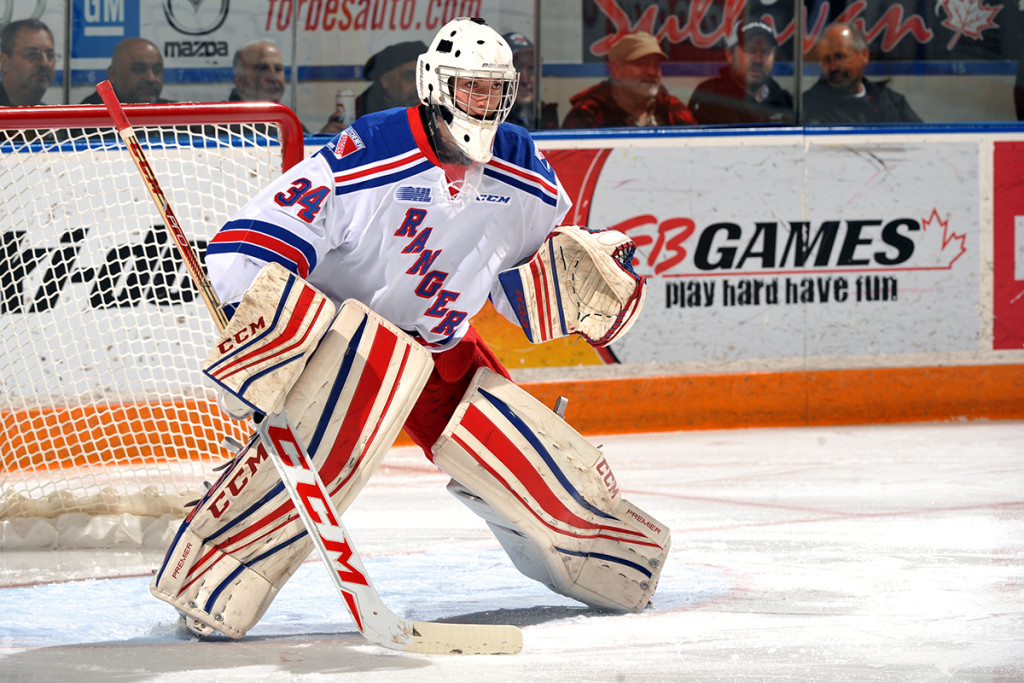 Toronto, ON – The Ontario Hockey League today announced the OHL Academic Players of the Month for December 2015, including defenceman Riley Stillman of the Oshawa Generals, goaltenders Stephen Dhillon of the Niagara IceDogs, forward Sasha Chmelevski of the Ottawa 67’s and Luke Richardson of the Kitchener Rangers.

East Division: Oshawa Generals defenceman Riley Stillman has been named the East Division Academic Player of the Month for December after maintaining an 85% average in his Grade 12 University level studies at Maxwell Heights Secondary School. The rookie defenceman is described as a very personable and dedicated individual by his teachers, coaches and teammates. The Peterborough, ON, native has three goals, four assists and seven points in 33 games with the Generals this season.

Central Division: Niagara IceDogs goaltender Stephen Dhillon has been named the Central Division Academic Player of the Month for December, carrying an impressive 97% average in Grade 12 University level courses at Governor Simcoe Secondary School. The 2015 Ivan Tennant Memorial Award recipient as the OHL’s top academic High School student, Dhillon plans to study Medical Sciences in University next year. The Buffalo, NY, native is 8-5-2-2 with a 2.88 goals-against average and a .903 save percentage in 19 games with the IceDogs this season.

West Division: Rookie Sasha Chmelevski is the West Division Academic Player of the Month for December. Sarnia’s first round pick in the 2015 OHL Priority Selection, Chmelevski recently joined the Ottawa 67’s after spending the first half of the season with the Sting where he held a 93% average in Grade 11 courses between Northern Collegiate Institute and the Michigan Virtual Chartered Academy. His accomplishments are highlighted by a 98% grade in Grade 11 English and a 96% mark in Grade 12 Mathematics. The Northville, MI, native had nine goals, eight assists, 17 points and a plus/minus rating of plus-10 in 29 games with the Sting this season.

Midwest Division: Kitchener Rangers goaltender Luke Richardson has been named the Midwest Division Academic Player of the Month for December after excelling in his Grade 11 studies at Grand River Collegiate Institute. The Barrie, ON, native is currently studying Biology, Physical Education, Law and Physics courses and is praised for maintaining a positive, hard-working mentality as both a student and an athlete.

“The Rangers organization is proud of the excellent marks Luke has earned,” said Rangers general manager Murray Hiebert. “He has shown a great level of dedication and balance in his commitment to both hockey and education.”

Richardson has appeared in six games with the Rangers this season, going 2-3-1-0 with a 3.53 goals-against average and an .884 save percentage.

During the 2014-15 season, the CHL proudly awarded 769 graduate players with academic scholarships representing an investment of over $6.2 million this season. Scholarship Programs throughout the CHL are solely funded by the member clubs of the Western Hockey League, the Ontario Hockey League, and the Quebec Major Junior Hockey League.