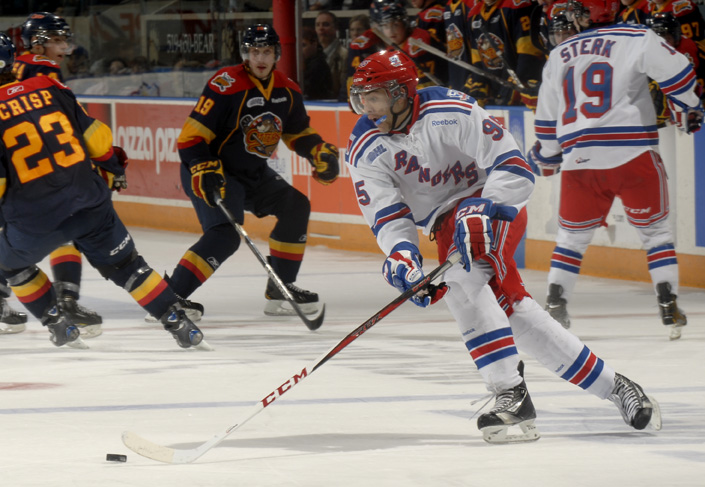 Justin Bailey scored once and added a pair of assist in the Kitchener Rangers 9-6 loss to the Erie Otters on Tuesday afternoon. Radek Faksa also scored and added an assist, and Darby Llewellyn, Ryan MacInnis and Brent Pedersen each extended recent goal scoring streaks in the losing effort.

The Rangers jumped ahead 1-0 early in the first period when second-year forward Darby Llewellyn converted the game’s first shot on goal into his seventh of the year. His long shot from the left wing beat Otters starter Oscar Dansk at the 1:05 mark. The tally was Llewellyn’s third point in two games and was assisted by Justin Bailey.

Erie responded five minutes later, tying it 1-1 off the stick of Connor McDavid. The standout sophomore collected a breakout pass at centre ice and raced to the net, cutting in front and sliding the puck behind the left pad of netminder Matthew Greenfield. McDavid’s seventh of the year was assisted by Spencer Abraham and Dane Fox

A power play goal with less than two minutes to play in the opening frame put the Otters ahead 2-1. The overage defenceman Abraham bounced a shot through Greenfield for his third of the season, with assists from Travis Dermott and Michael Curtis.

Each team fired nine shots on goal through the first 20 minutes.

Kitchener quickly tied things up in the second period, when Brent Pedersen potted his fifth of the year just 29 second in.Dansk turned Nick Magyar’s shot aside, but the Carolina Hurricanes prospect was on the doorstep to lift the rebound high over the netminder and level things at 2-2. Pedersen has goals in back-to-back games and points in three consecutive contests. With his assist, Magyar has recorded four points in two games.

The Otters restored their lead at the 2:58 mark when veteran forward Dane Fox collected a puck in Greenfield’s skates and tapped it into the net. The overager’s unassisted goal was his 22nd of the year and sixth in six games.

Less than 90 seconds later, Erie moved in front 4-2 with a goal from Curtis, his second point of the afternoon. The former Bellville Bull collected a pass from Dylan Strome and snapped hit high over the blocker of Greenfield for his ninth of the season.
Fox pushed the Otters advantage to three goals with a power play marker before the midway point. The Thamesville, ON native collected a pass from OHL scoring leader Connor Brown in front of the net, shifting the puck to his forehand and potting his league-leading 23rd goal of the year.

Fox’s second of the game prompted a Rangers’ goaltending change as Jordan DeKort was sent to the crease in relief of Greenfield.

Two late goals from the Rangers pulled them within one headed into the final frame. With less than two minutes to play, Radek Faksa earned the puck off a faceoff in Otters territory which was quickly recovered by Bailey. The Buffalo Sabres prospect launched a shot by Dansk for his seventh of the year and leads the Rangers with 16 points this season.

Rookie Ryan MacInnis continued to chip away at the deficit, banking a shot off an Erie defenceman’s skate in front of the net and picking up his fourth of the year. The unassisted tally was the St. Louis, MO native’s second in as many games. The draft-eligible centre has 10 points this season, including three in the Rangers’ last two contests.

Kitchener out-shot the Otters 11-9 in the second period.

Erie took a two-goal lead at the 6:31 mark of the final frame, going ahead 6-4 on Stephen Harper’s fourth of the year. The third-year Otters winger beat DeKort with a long shot, assisted by Abraham.

The Rangers responded with Faksa’s team-leading 11th goal of the season, scored less than one minute later. The Czech-born pivot snapped a shot over the glove of Dansk that ricocheted off the post and the cross bar and into the back of the net for his second goal in as many games. The Dallas Stars prospect has recorded four points in two contests. Kitchener native Logan Schmidt recorded an assist, giving him points in back-to-back games. The goaltender DeKort also earned a helper on the play.

Up 6-5, the Otters elected to make a goaltending change, sending Devin Williams in to replace Dansk with just over 12 minutes to play. Dansk made 18 saves, allowing five goals on 23 shots.

Five minutes later, with the Rangers on a 4-on-3 power play, Ben Thomson pulled the Rangers even at 6-6. Williams rejected Evan McEneny’s shot from the point, but Thomson jumped on the rebound at the top of the crease, backhanding a shot between the goalie’s pads for his third of the year. Bailey picked up his second point of the game with an assist.

The Otters added a trio of goals late to secure a 9-6 victory. Kyle Pettit scored the game winner with 3:29 to play, after Brown moved his own rebound behind the net and passed it to the sophomore in the crease. Pettite buried it in an open cage to put the Otters up 7-6.

Andre Burakovsky picked up a power play goal 69 seconds later, his 16th of the year assisted by Fox and McDavid. The goal was quickly followed by an empty net tally by Brown, his third point of the contest.

The Otters led shots on goal 8-5 in the final frame, but the Rangers finished with a 25-24 overall advantage.

With the win, Erie takes a 2-0 lead in the season series.

The Rangers return to the Kitchener Memorial Auditorium on Friday, November 22 to host the Belleville Bulls at 7:30 pm. Tickets to Rangers home games are available by phone at 519-578-1570 or 1-800-265-8977, via the internet at www.centre-square.com or in person at the Centre In the Square Box Office or the Kitchener Auditorium Box Office.