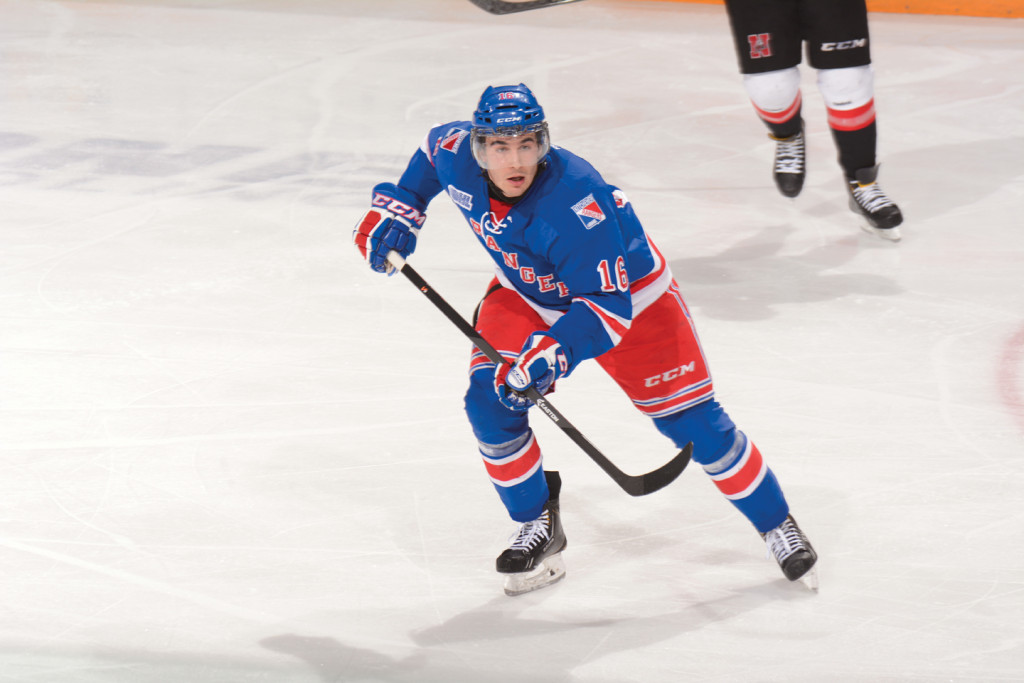 The Rangers opened the scoring less than five minutes into the first period, capitalising on heavy pressure at the London net. Starter Anthony Stolarz made several saves before rookie Mason Kohn jumped on a rebound and shovelled it between the goaltender’s pads. His eighth of the year was assisted by Ryan MacInnis and Brandon Robinson.

The Knights pulled even before the midway point of the frame, when Max Domi carried the puck around the Rangers net and slid the wraparound shot under netminder Jordan DeKort. Chris Tierney and Aiden Jamieson picked up the helpers on the Phoenix Coyotes prospect’s 32nd goal of the season.

Matt Rupert put London in front at the 11:12 mark when he collected a backhand pass from his brother Ryan, moved in and swept a quick shot past DeKort. His 29th of the year was assisted by rookie Mitchell Marner.

A power play marker from Ryan MacInnis leveled the score at 2-2 just over a minute later. The freshman centre picked off the puck in the offensive zone and unleashed a heavy shot from the just inside the blueline that soared past Stolarz. The unassisted tally was the 15th of his rookie campaign.

Matia Marcantuoni put the Rangers back in front late in the period, snapping a high shot over the glove-side shoulder of Stolarz for his career-high 14th of the year. The veteran centre’s goal was assisted by sophomore winger Darby Llewellyn.

Kitchener led shots on goal 10-8 after 20 minutes of play.

Two quick goals early in the middle frame gave London a 4-3 advantage. Gemel Smith pulled the Knights even with a sharp angle shot from the corner than bounced off a skate in front and deflected by DeKort.  The veteran’s unassisted goal was his 34th of the season.

Brett Welychka put the Knights ahead 58 seconds later, when Mike McCarron found him alone at the top of the Rangers’ crease. He chipped a shot past the glove of DeKort, with a secondary assist from Smith, bringing his season total to 21 goals.

The Rangers leveled the score at four goals apiece six minutes into the period. Curtis Meighan won a face-off in the Knights’ zone, and moved the puck back to Brent Pedersen, who sent a shot flying past Stolarz for his 16th of the year and third goal in five games.

Knights quickly restored their lead with a goal from veteran Josh Anderson less than two minutes later. The third year winger’s career-best 26th of the season was assisted by Domi and Tierney, the second point of the night for each.

The Rangers elected to make a goaltending change, sending Matthew Greenfield to the crease in relief of DeKort.

London stretched its lead to two goals at the 12:29 mark of the second period. Matt Rupert recorded his second of the game when he picked off a clearing attempt in front of the net and snapped a shot past Greenfield, putting the Knights up 6-4.

A pair of late period power play markers gave London a four-goal cushion headed into the second intermission. Smith recorded his second of the night, picking up a pass from Matt Rupert and lifting a shot high over Greenfield. Ryan Rupert picked up an assist on the play.

The line connected again as the Rangers remained shorthanded, killing off the latter half of a double minor penalty. This time it was Ryan Rupert pushing the puck over the line, potting his 20th of the season, with help from Smith and brother Matt.

The Knights out-shot the Rangers 20-5 in the second period.

The Knights continued to build their lead in the final frame with Anderson’s second goal of the contest. The Columbus Blue Jackets prospect was on the receiving end of a cross ice pass from Domi and lifted a high shot over the glove of Greenfield. Tierney picked up his third point of the night with an assist on the play at 8:26.

London added their tenth goal of the night with six minutes to play. Matt Rupert moved the puck behind the net to brother Ryan, who tucked it behind the skate of Greenfield for his second of the game. Defenceman Zach Bell recorded the second assist on the play.

The Rangers added one more with 90 seconds to play. Rookie Mike Davies fed the puck to Pedersen in front of the London net and the Carolina Hurricanes prospect chipped it over Stolarz for his second of the game. Meighan also picked up his second point of the night with an assist on the play.

The Knights led shots on goal 12-9 in the third period, finishing with a 40-24 overall advantage.

With the victory, London wins the season series five games to one.

The Rangers hit the road on Saturday, March 8 for a 7:00pm meeting with the Erie Otters. The team returns home to welcome the Windsor Spitfires for Fan Appreciation Day on Friday, March 14 at 7:30pm. Tickets to Rangers home games are available by phone at 519-578-1570 or 1-800-265-8977, via the internet at www.centre-square.com or in person at the Centre In the Square Box Office or the Kitchener Auditorium Box Office.