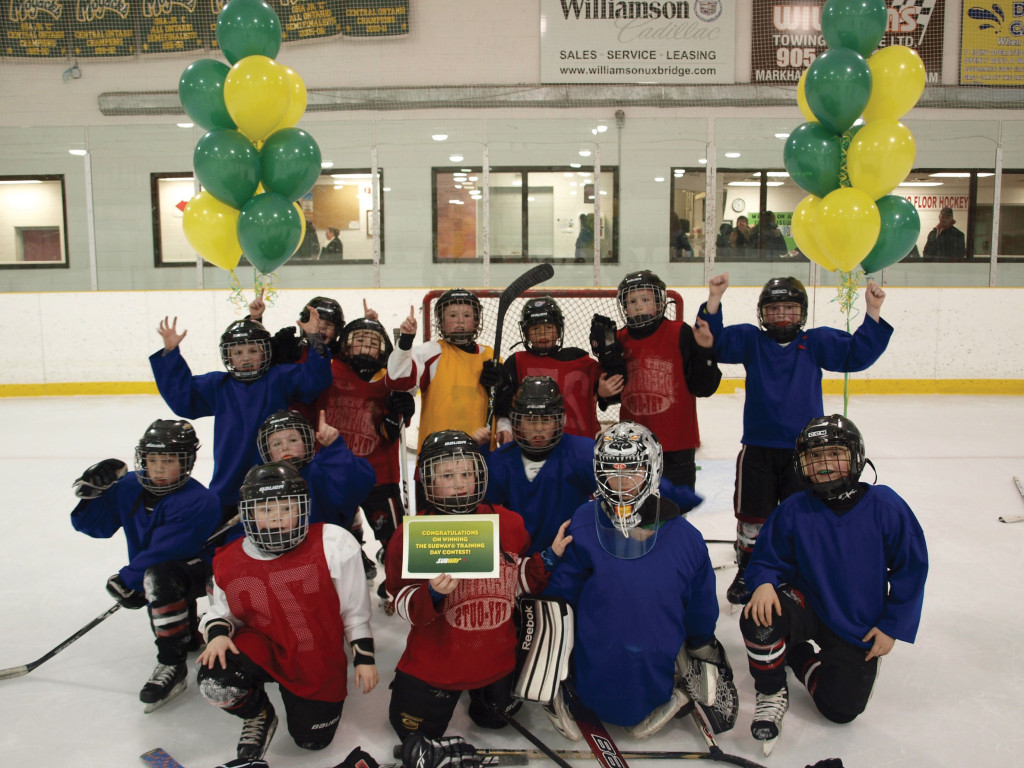 The Ontario Hockey League would like to congratulate the Port Perry Tyke 7 hockey team who are the winners of the SUBWAY Canada Training Day Contest.

The contest offered amateur hockey teams in Canada the chance to win a training day with an official CHL team by sharing online how they incorporate SUBWAY restaurants into their hockey training programs.

Here is a piece of the winning submission:

Thank-you for accepting our entry into the training day contest. We are a small town seven year old team from Port Perry. We play against towns 10 times our size and know our player have to be at their best to compete. But wins and loss are not what our team is about. We teach these young kids how to be athletes which includes proper nutrition. We tell them they’re like a car putting bad fuel in will make it run slower. So instead of Pizza parties we have Subway Sandwich parties like in the picture provided. Also we have a practice shot contest, when a player gets to 7500 practice shots they get a Subway lunch. Details are at http://portperrytyke7.weebly.com/team-shooting-contest.html. Our team would be honoured if selected for the training day contest and would love to be a part of any promotion to help the cause of great nutrition.

As winners, Port Perry Tyke 7 will receive on-ice instruction with Kitchener Rangers players and coaching staff along with off-ice training tips while enjoying a healthy SUBWAY lunch as part of their Training Day on March 9.

About SUBWAY® restaurants
SUBWAY®Restaurants is the world’s largest submarine sandwich franchise, with 40,000 restaurants in over 100 countries and more than 3,000 restaurants in Canada.  In 2011, the SUBWAY®chain surpassed McDonald’s in the number of restaurant locations worldwide. Headquartered in Milford, Conn., the SUBWAY®restaurant chain was cofounded by Fred DeLuca and Dr. Peter Buck in 1965. As the Official Training Restaurant for the CHL, SUBWAY®Restaurants is executing the Official Training Day Contest, encouraging hockey coaches, respective parents and friends across Canada to participate for a chance to have their local amateur league team train with their local CHL team. For more information about the SUBWAY® chain or to learn more about the Training Day contest, visit www.SUBWAY.ca.