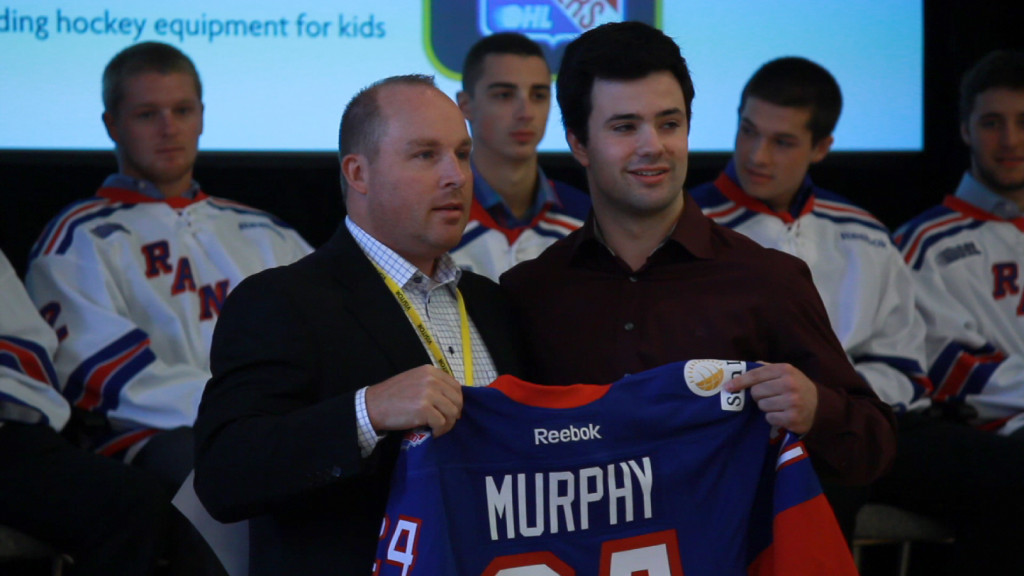 The Kitchener Rangers Hockey Club revealed Ryan Murphy as the Captain for its 50th anniversary season at a news conference and employee event at Sun Life Financial’s Canadian headquarters in Waterloo on Tuesday, September 18, 2012.

A first-round pick of the Carolina Hurricanes in the 2011 NHL Entry Draft, Murphy said he’s looking forward to leading the Rangers through the 2012-13 season, and is ready to take on the responsibility that comes with captaining the historic franchise.

“I like to think I lead through example on and off the ice. I’m a hard worker at practice. If I can do that all year, I think I can be a good example for our younger players.”

Now entering his fourth year on the Rangers blueline, Murphy recalled his time with the team and what he has learned from friends Gabriel Landeskog and Michael Catenacci, his roommate and captain through the 2011-12 campaign.

“They had different styles, but they were both a strong voice in the dressing room,” reflected the Aurora, Ontario-born rearguard. “They brought the team together and they played like leaders on the ice. I’m looking forward to following in their footsteps.”

Kitchener Rangers General Manager and Head Coach Steve Spott introduced Murphy to the crowd on Tuesday as an outstanding example of greatness, adding that “he has and will continue to represent our team with pride and provide motivation, leadership and excellence to both our players and the community.”

CLICK HERE to watch the Rangers Vision video from the 2012-13 Captain’s Announcement.

The Rangers also announced their assistant captains on Tuesday afternoon. Donning the ‘A’ for the club this year will be forwards Ben Thomson, Tobias Rieder and Matt Puempel and defenseman Ben Fanelli. The group flexed their leadership muscles at the Sun Life event, serving as celebrity coaches for a friendly game of floor hockey, running drills and giving their players some shooting tips.

Fixter spoke highly of the 2012-13 assistant captains, confident in their ability to work with Murphy to guide the Rangers through their 50th anniversary season.

“We have a good group here and the leadership chosen today is certainly up to the task of focusing the team both on and off the ice,” said Fixter after the announcement. “Like Murphy, Thomson, Fanelli and Rieder have learned from their past captains and have a good understanding of what it means to represent the tradition and history of the Rangers.”

Puempel is a new addition to the Kitchener roster, having joined the club in an off-season trade, but Fixter said the coaching staff has been impressed by the speed with which the former Peterborough Petes captain has adapted to his new surroundings.

Murphy will lead the Rangers into the 2012-13 season this Friday, September 21 when the team heads to Mississauga to open their season against the Steelheads. Follow the game action with live updates on Twitter @OHLRangers, and be sure to like us on Facebook.