RANGERS DOUBLE UP ON BULLS 8-4 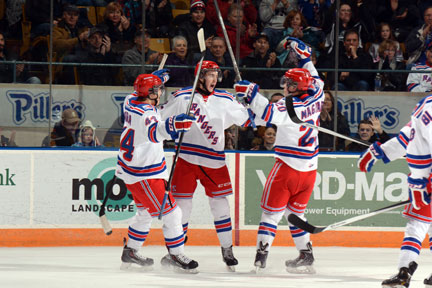 Two goals each from Darby Llewellyn and Ryan MacInnis led the Kitchener Rangers to an 8-4 win over the Belleville Bulls on Friday night. Curtis Meighan and Brent Pedersen also had multi-point outings with a goal and two helpers apiece, helping the Rangers to a third straight home win.

The Bulls opened the scoring near the midway point of the first period when defenceman Jordan Subban’s low wrist shot that bounced past the blocker of Rangers’ starter Jordan DeKort. The Vancouver Canucks prospect’s fifth of the season was assisted by Garrett Hooey.

Ryan MacInnis pulled the Rangers even with six minutes to play in the first, firing a shot behind the left pad of Jason Da Silva to record his fifth of the year and third in as many games. Nick Magyar set up the play with a sharp pass from the corner, earning his fifth point in three games with an assist. Brent Pedersen also extended his point streak to a third game with a helper on the play.

The Rangers out-shot Belleville 12-11 in the opening frame.

Kitchener jumped ahead 2-1 less than one minute into the second period. Max Iafrate collected the puck deep in Kitchener territory and carried it the length of the ice, firing a shot that bounced off a player and onto the stick of Pedersen. He buried the rebound to record his third goal in three contests and his sixth of the season. Radek Faksa also picked up an assist on the play, extending his point streak to a three games.

Overage rearguard Jake Worrad leveled the score at two goals apiece, scoring his first of the season at the 6:47 mark. Fellow fifth year skater Cameron Brace started the play, battling for possession along the boards and moving it to the Birr, ON native in scoring position. New addition Remi Elie also assisted on the play, his 17th point since being traded by the London Knights.

Two quick goals put the Rangers back on top before the halfway point. Justin Bailey put Kitchener up 3-2 with his eighth of the season, jumping on a faceoff win by Faksa and leaning into a shot that flew by Da Silva. Bailey has scored in back-to-back games, recording four points over that span. Faksa has notched two points in three straight games and leads the team with 18 points.

Iafrate extended the advantage to two goals 1:14 later, recovering a Bulls turnover at the blueline and launching a heavy shot past the goaltender for his second of the year. The unassisted tally was also the veteran rearguard’s second point of the contest.

With seven seconds remaining in the second period, the Rangers added one more goal, taking a 5-2 lead into the intermission. Scott Teskey’s pass from the boards connected with Curtis Meighan in the slot, and the third year centre moved it quickly to Darby Llewellyn. The Ann Arbor, MI native snapped the puck under Da Silva to pick up his eighth of the season, passing his previous career-best goal total.

Kitchener continued to lead shots on goal in the second period by a 17-14 margin.

Llewellyn and Meighan connected for a second time early in the final frame, pushing the Rangers’ lead to four goals. Llewellyn collected Meighan’s pass from behind the Belleville net and pushed it past a screened Da Silva, recording his fifth point in three games.

Two quick goals from the Bulls at the midway point of the period cut Kitchener’s advantage to 6-4. David Tomasek struck first, lifting a shot over the right pad of DeKort late in a Belleville power play. Assisting on the import forward’s sixth of the year were centre Jake Marchment and winger Chad Heffernan.

Eight seconds later, Brace potted his sixth of 2013-14, with help from captain Brendan Gaunce. The overager has scored twice in three games since joining Belleville in a trade with the Owen Sound Attack.

MacInnis scored his second of the game with eight minutes to play, racing over the blueline and picking up a long rebound, snapping it high glove-side past Da Silva. His sixth of year was assisted by Pedersen and Magyar.

The Rangers added a short-handed goal with less than two minutes to play, securing an 8-4 victory. Mason Kohn picked off the puck in the Rangers’ zone and jumped on the odd-man rush, sliding a pass to Meighan, who chipped in for his third goal of the season and third point of the game.

The Bulls out-shot the Rangers 18-13 in the third period, finishing with a 43-42 overall advantage. DeKort made 39 saves to pick up the victory, the Rangers third straight win at The Aud.

The Rangers visit the Guelph Storm on Sunday, November 24 for a 2pm start. They return to the Kitchener Memorial Auditorium on Friday, November 29 for a 7:30 pm meeting with the Owen Sound Attack. Tickets to Rangers home games are available by phone at 519-578-1570 or 1-800-265-8977, via the internet at www.centre-square.com or in person at the Centre In the Square Box Office or the Kitchener Auditorium Box Office.