RANGERS DOUBLE UP ON OTTERS 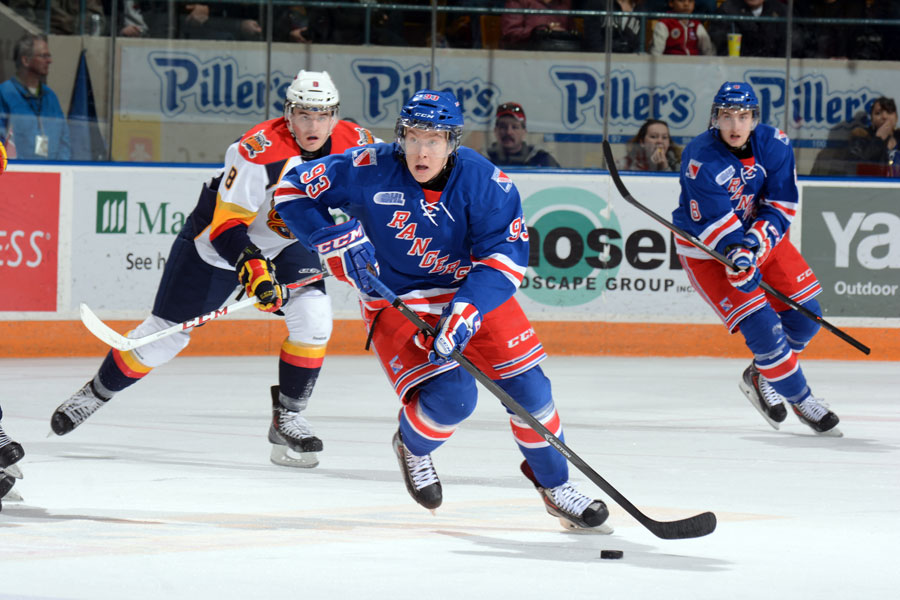 Matthew Greenfield made 31 saves in the Kitchener Rangers’ 6-3 victory over the Erie Otters on Monday afternoon. Six different Rangers scored and Logan Schmidt picked up a pair of assists in the win.

Erie opened the scoring nine minutes in, when Brendan Gaunce pounced on the puck at the side of the net and slid it under Matthew Greenfield for his 25th of the season. Overager Dane Fox and league scoring leader Connor Brown picked up assists on the play.

The Rangers responded just 72 seconds later, tying the game at 1-1. Jimmy Soper jumped on a long rebound, swatting it to Scott Teskey. The former Mississauga Steelhead snapped a shot into the open side of the net, past Otters starter Oscar Dansk for his third of the season.

With less than three minutes to play in the frame, Kitchener jumped in front. Defenceman Logan Schmidt sprung the Rangers on the rush, racing through the neutral zone and moving the puck to Mike Davies on the wing. The rookie’s shot deflected off the skater in front of the net past Dansk, bringing his season total to five goals.

The Otters led shots on goal 13-11 after the first period.

Captain Ben Fanelli’s third of the season put the Rangers ahead by two goals near the halfway mark. The overage rearguard picked off a pass at the Erie blueline and fired a long point shot that bounced by Dansk, lifting Kitchener to a 3-1 lead.

The home team continued to push late in the frame, extending their advantage to three goals at the 14:25 mark. Matia Marcantuoni’s backhand shot was turned aside by Dansk, but during the ensuing scramble in front, the puck was punched over the goal line by sophomore Darby Llewellyn. His career-best 23rd of the season was also assisted by Frank Hora.

Kitchener led shots on goal 10-7 in the second period.

Veteran centre Curtis Meighan scored early in the final frame, giving the Rangers a 5-1 lead. Import defenceman Dmitrii Sergeev set up the play with a drop pass inside the Erie blueline and, Meighan lifted a high shot over Dansk to pot his seventh of the season.

Kitchener added their sixth goal on a 5-on-3 power play opportunity with just over five minutes to play. Schmidt’s shot on goal was blocked by Dansk, but rookie Nick Magyar jumped on rebound, recording his 15th of the year.  Schmidt’s helper was his second of the game.

The Otters scored two late goals to cut into the Rangers’ lead. With less than four minutes remaining, Gaunce moved a crisp pass across the front of the Kitchener net, catching Connor McDavid in stride. The sophomore fired it by Greenfield for his 19th of the season, with the second assist credited to Michael Curtis.

With 36 seconds left on the clock, Dylan Storme earned the puck off the faceoff win to the right of Greenfield and moved it quickly to Kurtis MacDermid. The third year blueliner beat Greenfield for his sixth of the campaign.

Erie out-shot Kitchener 14-10 in the third period and finished with a 34-31 overall advantage. Greenfield made 31 saves and was named the contest’s first star.

The Rangers hit the road on Thursday, February 20 for a 7:05 meeting with the Windsor Spitfires. They return home to welcome the Owen Sound Attack to the Kitchener Memorial Auditorium on Friday, February 21 at 2:00pm. Tickets to Rangers home games are available by phone at 519-578-1570 or 1-800-265-8977, via the internet at www.centre-square.com or in person at the Centre In the Square Box Office or the Kitchener Auditorium Box Office.