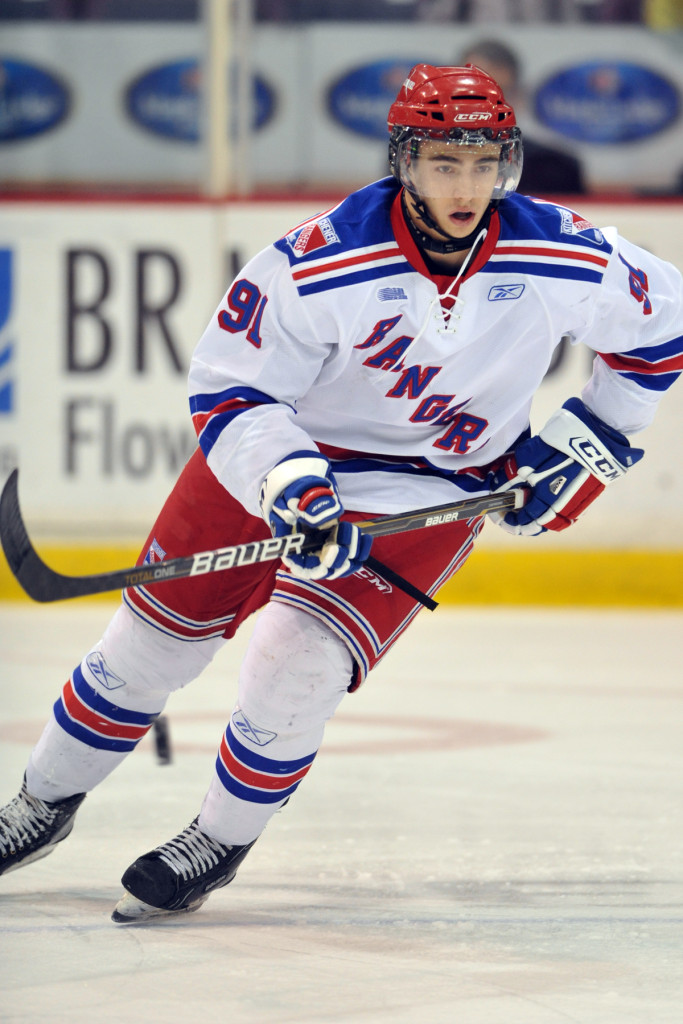 The Kitchener Rangers evened their pre-season record at 1-1 with a solid 5-1 victory over the Battalion in Brampton Monday afternoon.

The Rangers opened the scoring when Matia Marcantuoni beat Battalion goaltender Keegan Wilson with a low slap shot from the top of the faceoff circle at 3:40 of the first period.  Cody Sol and Ben Thomson picked up the assists.

The Rangers extended their lead to 2-0 when Ben Fanelli’s slap shot from inside the blueline beat Wilson high to the glove side.

Frank Palazzese stopped 13 shots while the Rangers fired 7 shots on the Battalion net.

At 1:25 of the second period, Radek Faksa banged in a rebound on a two-man advantage to put the Rangers up 3-0.  Iafrate and Andrew Crescenzi picked up the assists.

Ben Thomson’s second goal of the pre-season extended the Rangers lead to 4-0 when he finished off a three-way passing play from Marcantuoni and Faksa at 6:17.

43 seconds later Josh Sterk made it 5-0 for the blueshirts.  Fanelli and Marcantuoni picked up the assists.

The Rangers out shot the Troops 15-7 in the second.

The Batallion out shot the Rangers 9-3 in the third and held a 29-25 shooting edge overall.

The Rangers continue their pre-season schedule on Thursday night in London against the Knights before returning home on Sunday, September 11th at 4:00pm when they play host to the Erie Otters. Tickets may be purchased by phone at 519-578-1570 or 1-800-265-8977, via the internet or in person at the Aud Box Office or Centre in the Square Box Office.

Notes:
Marcantuoni had 4 points, (1G, 3A)
Ben Fanelli had a goal and an assist.
Max Iafrate picked up 2 assists in his Rangers debut.
Frank Palazzese stopped all 18 shots he faced.
Jack Moylan stopped 10 of the 11 shots he faced.