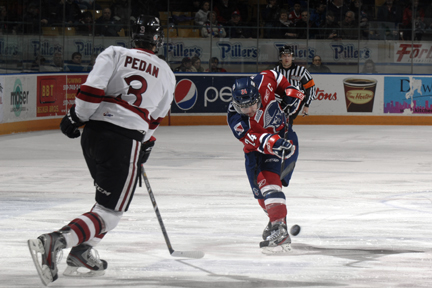 The Kitchener Rangers fell 4-3 in a shootout to the Guelph Storm on Friday night. Tobias Rieder and Joshua Leivo each extended their recent point streaks to eleven games with a goal and an assist, respectively. Justin Bailey and Ryan Murphy also scored for the Rangers.

Guelph struck first, opening the scoring less than five minutes into the first period. Ryan Horvat carried the puck into the Rangers zone and dropped a pass for Patrick Watling, who fired a crisp shot past Rangers starter Joel Vienneau. His seventh of the season was also assisted by Ben Harpur.

Kitchener evened the score at 8:36, capitalizing on a two-man power play opportunity. Joshua Leivo’s shot from the wing was tipped by Tobias Rieder past goaltender Garret Sparks. The play extended both players’ recent point streaks to 11 games. The German import has 22 goals on the season, including the 12 he has potted on his scoring streak. Captain Ryan Murphy earned the second assist on the play.

With 22 seconds remaining in the frame, the Storm jumped back in front 2-1. Scott Kosmachuk caught Vienneau out of position, burying the puck in the open net for his 28th of the year.

The Rangers out-shot the Storm 15-13 through the first 20 minutes of play.

A power play goal from Justin Bailey pulled the Rangers even in the early half of the second period. Evan McEneny set up the tally with a pass that found the draft-eligible forward in the slot. Bailey shifted the puck to his backhand and lifted a shot over Sparks for his 16th goal of the season and third in three games.

The Rangers continued to lead shots on goal in the second by a 13-11 margin.

Kosmachuk’s second of the game put the Storm ahead 3-2 with just over six minutes to play. Vienneau made the initial save on Zac Leslie, but the Winnipeg Jets prospect was in front of the net to bat in the rebound. Jason Dickinson also assisted on Kosmachuk’s 29th of the season.

With less than a minute remaining, Murphy pulled the Rangers even, forcing the contest into overtime. Kitchener controlled the puck off a faceoff deep in Guelph territory and quickly moved it to the rearguard at the blueline. His rising shot beat Sparks glove side, giving him his seventh of the season. Assists were credited to Rieder and defenceman Frank Corrado.

The Storm led shots on goal 16-10 in the third period, and the teams finished even after regulation with 40 shots apiece.

Each goaltender made three saves in the extra frame and the contest went to a shootout. Justin Auger and Dickinson each scored, and Sparks stopped two Rangers shooters to secure a 4-3 Storm victory.

The Rangers return to the Kitchener Memorial Auditorium on Sunday, February 10 when they host the London Knights at 2:00pm. Tickets to Rangers home games are available by phone at 519-578-1570 or 1-800-265-8977, via the internet at www.centre-square.com or in person at the Centre In the Square Box Office or the Kitchener Auditorium Box Office.