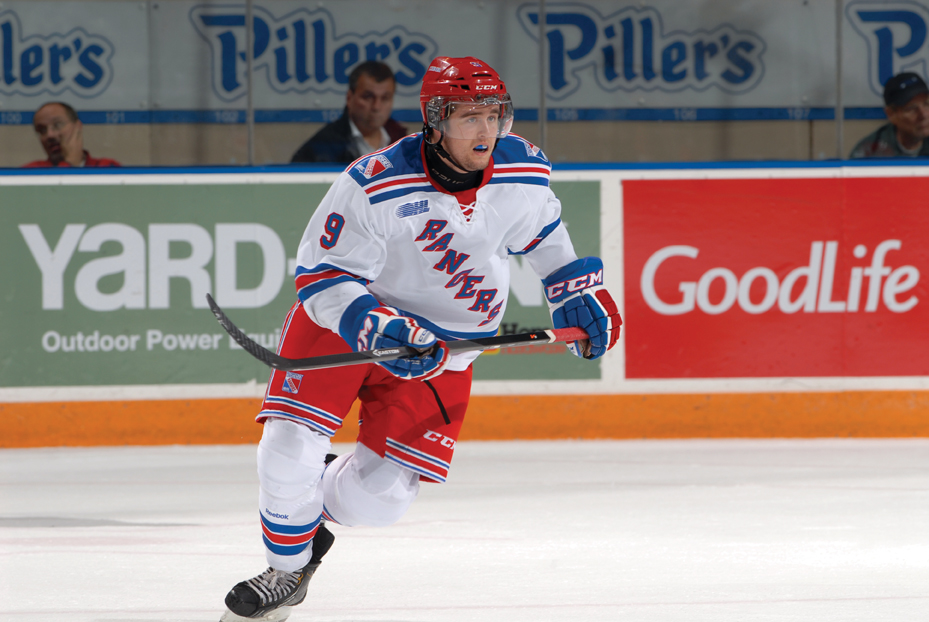 Scott Teskey scored in the final minute of the Kitchener Rangers’ 6-1 loss to the Owen Sound Attack on Wednesday. The two teams will meet again on Friday as the Attack visit The Aud for the Rangers home opener.

Attack forward Holden Cook opened the scoring early in the first period, taking advantage of an out of position netminder and chipping in a goal short-handed. The tally was his first of the season, assisted by Daniel Milne and Thomas Schemitsch.

The Attack would add a second goal just past the halfway point, taking advantage on the power play and extending their lead to 2-0. Matthew Greenfield turned aside the first shot, but Kyle Platzer jumped on the rebound and moved it quickly to Petrus Palmu. The rookie import snapped a quick shot past the goaltender’s right pad to score his first career OHL goal.

Milne’s first goal of the season pushed Owen Sound ahead by three goals just over three minutes later. The veteran winger carried the puck down the wing over the blueline before cutting in front of the net and chipping a shot over Greenfield. Damir Sharipzyanov and Schemitsch earned helpers on the play.

Two quick goals on a two-man power play added to the Attack’s lead late in the frame. First, Zach Nastasiuk potted his first of the season, with assists from Chris Bigras and Santino Centorame.

Less than a minute later, Cook added his second of the game, pushing Owen Sound ahead 5-0. Milne collected his third point of the night with an assist, and defenceman Connor Walters also picked up a helper on the goal at 17:50.

The Attack continued to lead shots on goal in the second by a 13-10 margin.

Owen Sound’s power play continued to push in the third period, when Sharipzyanov scored his first of the year on the man advantage. Ryan Heeps and Schemitsch earned the assists on the play.

Winger Scott Teskey ended Jack Flinn’s shutout bid with less than a minute remaining in the final frame. With the Rangers on the power play, the Mississauga native jammed a puck past the netminder to earn his first goal of the season. Sophomores Mason Kohn and Frank Hora assisted on the play at 19:10.

Owen Sound out-shot the Rangers 8-7 in the third period, finishing with a 36-31 overall advantage.

The Rangers return to the Kitchener Memorial Auditorium for their 52nd Home Opener against the Attack on Friday, September 26 at 7:30pm. Tickets to all Kitchener Rangers home games are now available by phone at 519-578-1570 or 1-800-265-8977, via the internet at www.centre-square.com or in person at the Centre In the Square Box Office or the Kitchener Auditorium Box Office.