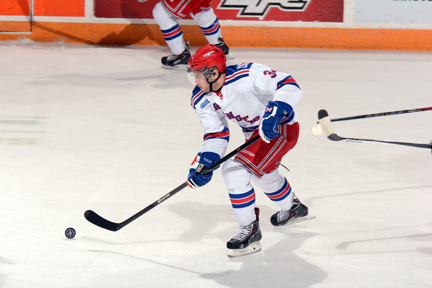 Max Iafrate scored and added two assists for the Kitchener Rangers in a 6-5 overtime loss to the Niagara IceDogs. Nick Magyar and Ryan MacInnis each recorded a goal and a helper in the losing effort.

The Rangers opened the scoring, capitalizing on a power play opportunity eight minutes into the first period. Rearguard Max Iafrate picked up his second goal in as many games, blasting a high shot over Niagara goalie Brent Moran. Darby Llewellyn and Ryan MacInnis picked up the assists on the veteran blueliner’s sixth of the season.

Kitchener added to its lead 46 seconds later, when rookie Nick Magyar jumped on a loose puck in the neutral zone, sweeping around an IceDogs defender and sliding a backhand shot behind Moran’s right pad. The unassisted tally was his 12th of the year and third point in his last two contests.

Niagara got on the board late in the first period, converting on the man advantage to cut the Rangers’ lead to 2-1. Team scoring leader Brendon Perlini jumped on a rebound in front of the Kitchener net, chipping it over starter Matthew Greenfield for his 26th of the season. Assists on the play were credited to Toronto Maple Leafs prospect Carter Verhaeghe and team captain Luke Mercer.

Each team fired 10 shots on goal in the opening frame.

The Rangers restored their two-goal lead with a power play marker six minutes into the second period. Freshman Logan Schmidt set up the play, moving the puck to MacInnis at the top of the faceoff circle. The draft-eligible pivot quickly snapped a shot over Moran, picking up his 11th of the campaign. Iafrate earned his second point of the night with an assist on the goal.

Less than three minutes later, the Rangers added to their lead when rugged winger Brent Pedersen outmuscled a Niagara attacker inside Kitchener territory, carrying the puck through the neutral zone. The Carolina Hurricanes prospect fired a shot in-stride, beating the keeper high blocker-side. His 12th was assisted by Magyar, the Mentor, OH native’s second point of the night.

A second IceDogs power play goal soon cut the Rangers’ lead to 4-2. Mercer’s point shot was tipped by Greenfield by sophomore winger Anthony DiFruscia, his 18th goal of the season. Aleksandar Mikulovich earned the second helper on the play at 10:30.

Niagara led shots on goal 10-7 in the second period.

Two quick goals from the IceDogs evened the score at 4-4 early in the final frame. Perlini added his second of the game playing with the man advantage. His 27th of the year was assisted by Mercer and Verhaeghe.

Billy Jenkins added another Niagara goal 33 seconds later, pouncing on a rebound in front of Greenfield and bumped it into the back of the net. Alexander Protapovich and Blake Siebenaler picked up the helpers on Jenkins’ fifth of the season.

The Rangers sent Jordan DeKort to crease in relief of Greenfield, who made 18 saves in nearly 43 minutes of work.

Perlini completed the hat trick just before the halfway point of the period with his third power play marker of the game. Verhaeghe found the draft-eligible forward alone to the left of DeKort, and he fired high glove-side, recording his 28th of the season. Mercer earned his fourth point of the game with a helper on the play.

With 3:17 left to play, the Rangers pulled even at 5-5. Moran blocked Llewellyn’s shot, but a streaking Justin Bailey knocked the rebound over the netminder for his 17th of the season, tying his career high. Iafrate also picked up an assist on the play, his third point of the night. With the goal, Bailey has recorded five points in his last three games played.

With the score deadlocked at five goals apiece, the contest went into overtime. The IceDogs out-shot Kitchener 12-10 in the third period, finishing regulation with a 32-27 advantage on the shot clock.

Mikulovich secured a 6-5 Niagara win late in the extra frame, blasting a shot from the point past DeKort. His fourth of the year was assisted by Jordan Maletta.

The Rangers travel to Guelph on Sunday, January 12 for a 2:00pm game against the Storm. The team returns to the Kitchener Memorial Auditorium on Friday, January 17 to host the Storm at 7:30pm. Tickets to Rangers home games are available by phone at 519-578-1570 or 1-800-265-8977, via the internet at www.centre-square.com or in person at the Centre In the Square Box Office or the Kitchener Auditorium Box Office.