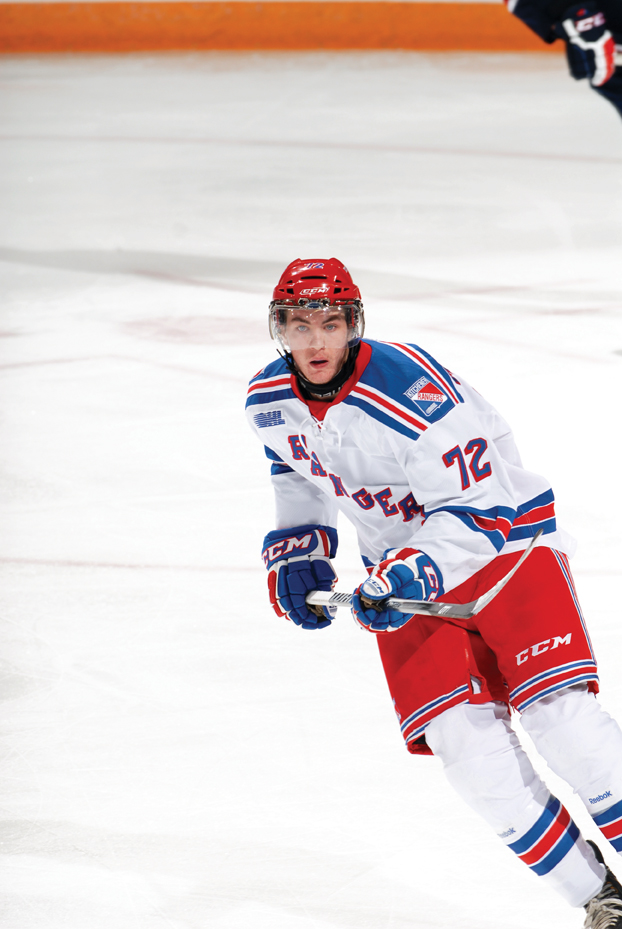 Kitchener opened the scoring just past the 11 minute mark of the first period, capitalizing with the man advantage. Brandon Robinson threw a puck at the net that was tipped by Matia Marcantuoni past Otters’ netminder Oscar Dansk. Rookie defenceman Frank Hora also assisted on the power play tally, Marcantuoni’s 15th goal of the season and second in as many nights.

Each team fired eight shots on goal in the opening period of play.

Ryan MacInnis lifted the Rangers to a two-goal advantage 6:39 into the middle frame. The drafte-eligible centre’s first shot was blocked, but he stayed with the puck and snapped a shot over the shoulder of Dansk. The freshman has scored in consecutive games, and has 16 on the season. Robinson and Mason Kohn each picked up an assist on the play.

The Otters found the scoreboard less than two minutes later. Sophomore Connor McDavid carried the puck over the blueline with speed, cut across the front of the Rangers’ crease and shoveled it under goaltender Matthew Greenfield. His 25th of the year was assisted by league scoring leader Connor Brown and rearguard Troy Donnay.

Kitchener re-established a two-goal cushion just past the halfway point, jumping ahead 3-1. Rookie Nick Magyar raced into the Otters zone and waited for the defenceman to attempt a shot block before chipping the puck past Dansk on the short side. Hora earned the lone assist on the play – his second of the game.

The goal prompted Erie to make a goaltending change, as Devin Williams entered in relief of Dansk after the latter allowed three goals on 12 shots.

A pair of quick goals pulled Erie even before the end of the frame. Joel Wigle recorded his sixth of the season at the 13:36 mark, with help from Kurits MacDermid and Brendan Gaunce.

Dane Fox added the tying goal 41 seconds later, beating Greenfield with his league-leading 61st of the year. McDavid recorded his second point of the night with an assist on the play.

The Otters led shots on goal 13-4 in the second period.

Erie took its first lead of the game early in the third period. Import forward Andre Burakovsky lifted a shot that beat the glove of Greenfield, bringing his season total to 37. Michael Curtis and Gaunce assisted on the goal.

Fox added his second of the game with less than 12 minutes to play, snapping a quick one-timer past Greenfield to extend the Otters lead to 5-3. Brown and McDavid were credited with the helpers, their second and third points of the game, respectively.

Donnay fired a shot the length of the ice into an empty Rangers net to put the Otters up by three with 1:10 to play. The short-handed tally was his second goal of the season and gave him a pair of points on the night.

A second empty net goal from Gaunce with 34 seconds to play secured a 7-3 Erie win.

The unassisted short-handed marker was the centre’s 27th of the year and his fourth point of the night.

The Rangers hit the road on Wednesday, March 12 for a 7:00pm meeting with the Guelph Storm. The team returns home to welcome the Windsor Spitfires for Fan Appreciation Day on Friday, March 14 at 7:30pm. Tickets to Rangers home games are available by phone at 519-578-1570 or 1-800-265-8977, via the internet at www.centre-square.com or in person at the Centre In the Square Box Office or the Kitchener Auditorium Box Office.