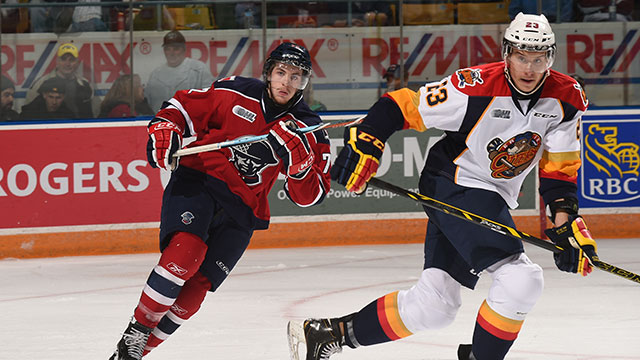 Ryan MacInnis scored his second goal in as many games for the Kitchener Rangers in an 8-3 loss to the Erie Otters on Friday night. Brent Pedersen and Frank Hora each scored their first of the year in the losing effort.

The Otters opened the scoring early in the first period, capitalizing on a power play opportunity. Rookie Alex DeBrincat potted his sixth of the season, deflecting a shot past the blocker of Rangers starter Matthew Greenfield. Connor McDavid and Dylan Strome picked up the assists on the goal, less than two minutes into the frame.

McDavid would notch his sixth of the year minutes later, nabbing the puck at the side of the Rangers net and sliding it behind the skate of Greenfield. Rearguards Kurtis MacDermid and Travis Dermott recorded the assists on the captain’s tally, which put the Otters up 2-0.

The Rangers got on themselves on the board just past the midway point of the opening period. With Kitchener on the power play and applying heavy pressure at the net, sophomore forward Ryan MacInnis found a rebound and pushed it past Devin Williams. The Arizona Coyotes prospect’s second goal in as many games was assisted by Darby Llewellyn and Justin Bailey.

Erie re-established its two goal lead in the final minute of the frame, when Kyle Maksimovich recorded his first career goal, racing in alone and chipping a shot past Greenfield. Veterans Patrick Murphy and Troy Donnay assisted on marker, which sent the Otters into intermission with a 3-1 lead.

Each team fired 11 shots on goal through the opening 20 minutes.

Two quick goals early in the second period put Erie ahead 5-1. DeBrincat scored his second of the game 36 seconds into the middle frame, picking up a pass from McDavid beside the Rangers net and firing a quick shot past Greenfield.

Less than a minute later, first-year winger Mason Marchment recorded his second of the year, racing in alone and passing the puck between his legs before lifting a shot over the netminder’s shoulder.

Marchment’s goal prompted Rangers Head Coach Troy Smith to make a goaltending change, sending Dawson Carty to the crease in relief of Greenfield. The appearance was Carty’s first since joining the Rangers in a trade with the Mississauga Steelheads earlier in the season.

McDavid’s second of the game put the Otters up 6-1 just past the 12 minutes mark of the period. The top prospect picked up the puck and carried it over the Rangers’ blueline, behind the net and slid the wraparound shot behind Carty’s left skate. The unassisted tally was his seventh goal of the year.

The Otters added another quick goal 39 seconds later, off the stick of overage rearguard Troy Donnay. The marker was his first of the season in his return from the Hartford Whalers (AHL), and was assisted by Strome and DeBrincat.

Veteran winger Brent Pedersen potted his first goal of the season for the Rangers less than a minute after that, jumping on a rebound in the blue paint and pushing it past Williams. Sophomore Mike Davies earned his second point of the2014-15 season with the lone assist on the play.

Erie continued to press offensively in the second period, jumping ahead 8-2 near the 14 minutes mark. First round pick Taylor Raddysh found the top corner of the net, over the right shoulder of Carty, and recorded his third career goal. Marchment earned his second point of the night with an assist on the play.

The Otters out-shot the Rangers 16-12 in the middle frame.

Kitchener added one more goal with less than two minutes to play in the game. Second-year blueliner Frank Hora pitched a long shot over the glove of Williams to notch his first goal of the season.  Adam Mascherin and Dmitrii Sergeev were credited with the helpers on the power play marker.

The Otters led shots on goal 9-6 in the third and finished with a 36-29 overall advantage on the shot clock.

The Rangers travel to Erie on Saturday, October 11 for a 7:00pm meeting with the Otters. The team returns to The Aud on Thanksgiving Monday, October 13 for a 2:00pm matinee game against the Guelph Storm. Tickets to all Kitchener Rangers home games are now available by phone at 519-578-1570 or 1-800-265-8977, via the internet at www.centre-square.com or in person at the Centre In the Square Box Office or the Kitchener Auditorium Box Office.