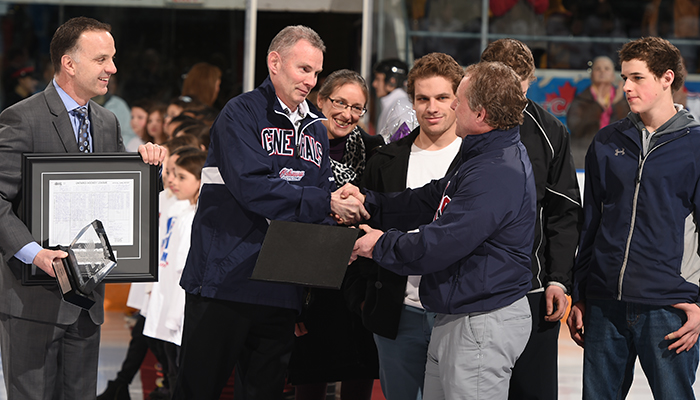 The Kitchener Rangers honoured head trainer Dan Lebold prior to their game vs. the Oshawa Generals on Friday, February 19th.

Dan began his OHL career with the Sudbury Wolves at the beginning of the 1992-93 season. He would spend a total of three seasons and 204 regular season games plus 43 playoff games with the Sudbury franchise before joining the Kitchener Rangers to start the 1995-96 season.

In 1997, he was selected as a member of Hockey Canada’s training staff for the World Junior Championships, winning a gold medal with Team Canada in Switzerland. He was once again named to the staff in 2010 and 2011, winning silver in each tournament. 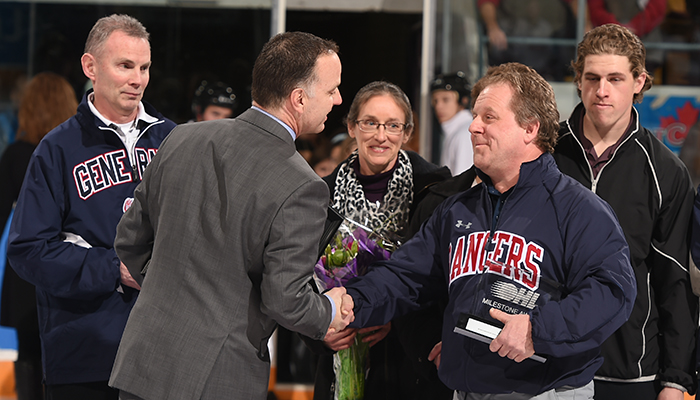 Dan was presented a crystal award from Bryan to congratulate him on his achievements on behalf of the Oshawa Generals organization, then was awarded the OHL Milestone Award and presented a framed game sheet of his first OHL game by Vice-President Baker.

Commissioner David Branch was not able to be in attendance, but sent along his best wishes on Dan’s achievement.

“It gives me great pleasure on behalf of all Member Teams in the Ontario Hockey League to acknowledge and congratulate Dan Lebold on 24 outstanding seasons of service as a Head Trainer in the Ontario Hockey League,” said Branch. “Over the years Dan has been a leader in affecting innovative changes for the benefit and safety of the most important people in the game – the players – along with serving not only the Kitchener Rangers, but as well Team Canada and other special event activities.

“On behalf of the league, I would like to wish Dan and his family continued success and good health.”

Rangers President Norm Leblond then presented Dan and his family with a vacation package to thank them for all their sacrifices over the last 20+ years, and allowing him to play such a role in the history of the Rangers organization and its players.

“Dan has been an integral part of the Rangers family for 21 years, and we wanted to show our appreciation in some small way and to acknowledge all the hard work and time Dan has dedicated to this organization,” said Rangers Chief Operating Officer Steve Bienkowski.

“The Rangers have experienced a high degree of success over the past two decades, and a big reason for that is the impact Dan has directly had on our players.” 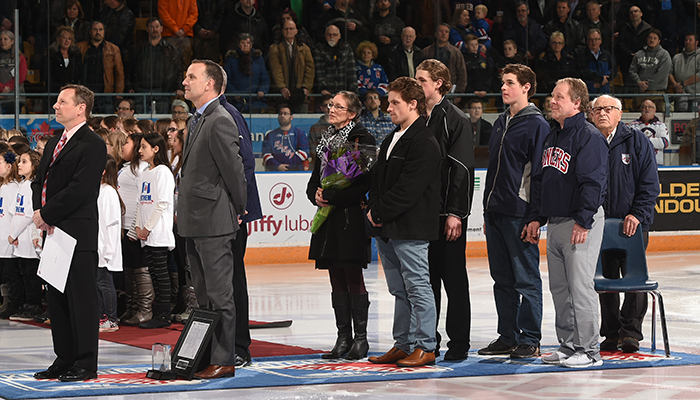